I’ve seen these around the internet and they’re always pretty good, but I’ve never seen one like this, with an extraordinarily famous athlete in his own city. I’ve seen Demi Lovato, DJ Khaled, Danica Patrick in various places. That, I get. If I get in a random cab in fucking Seattle then I’m not going to think Demi Lovato is behind the wheel, even if she’s asking about Demi Lovato. But this? This is inexcusable. If you’re in Boston and a huge Hispanic dude in a dollar store afro is asking you about the Boston Red Sox, that’s David Ortiz.

I was actually stunned when it cut to guys in the car (trigger warning alert, I’m being sexist and saying not every girl in Boston is a Red Sox fan), because there’s really no excuse to be a guy who lives in Boston and doesn’t recognize David Ortiz. His voice, his smile, his size, they should all VERY clearly tell you that Big Papi is behind the wheel. Bold by these guys to sign the waiver and allow their footage to be used. If I didn’t recognize David Ortiz in a viral video you’d have to blackmail me in order to get me to release the footage because I’d know my friends/the internet would KILL me for being a moron.

PS – Wtf is this shirt, Papi? Looks like he got this thing in the Big and Tall section of the welfare store. 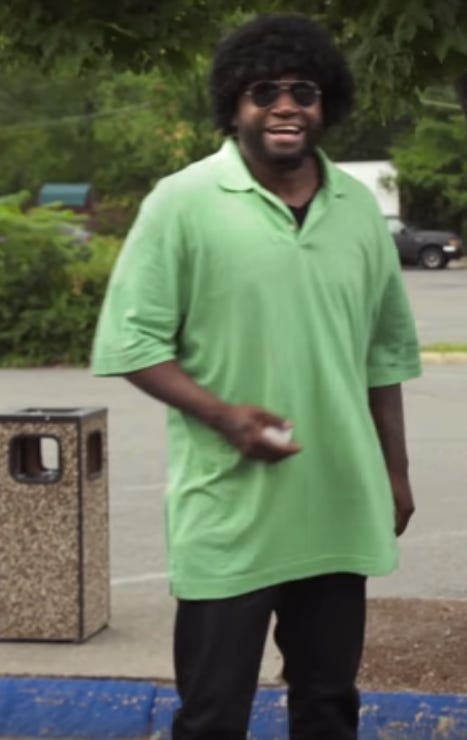