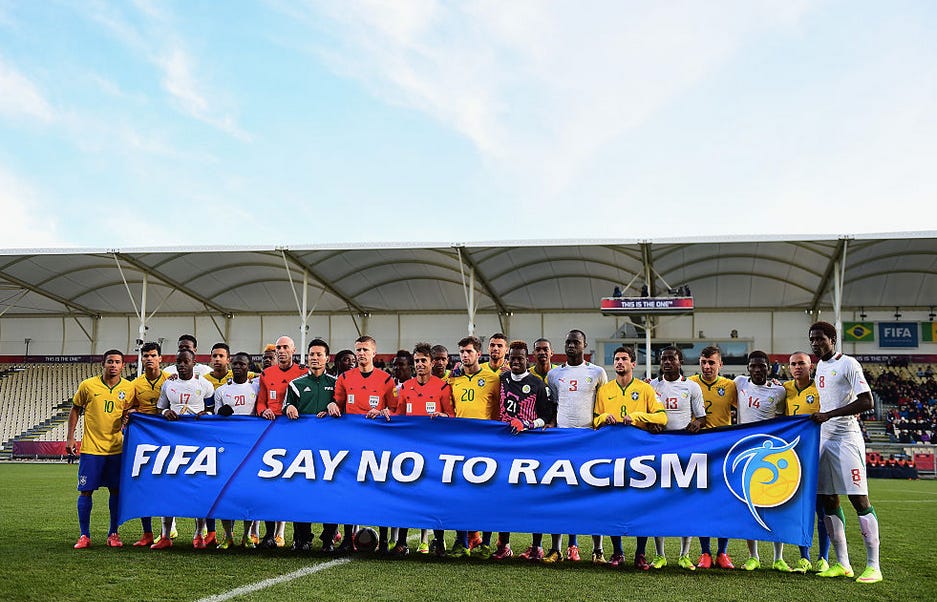 (AP) — FIFA has disbanded its anti-racism task force, declaring the work complete despite ongoing concerns about discriminatory behavior at matches in 2018 World Cup host Russia. FIFA wrote to members of the task force to say that it has “completely fulfilled its temporary mission” and “is hereby dissolved and no longer in operation.” “I wish I could say that I am shocked by the decision, but unfortunately I am not,” task force member Osasu Obayiuwana told The Associated Press on Sunday. “The problem of racism in football remains a burning, very serious and topical one, which need continuous attention. “I personally think there remained a lot of very serious work for the task force to have done — the 2018 World Cup in Russia being one such matter. But it is evident the FIFA administration takes a different position.” The task force was established in 2013 by then-FIFA President Sepp Blatter and headed by Jeffrey Webb, a vice president of world soccer’s governing body until he was arrested in 2015 as part of the American investigation into soccer corruption. Webb, who pleaded guilty to racketeering charges, was replaced exactly a year ago as task force chairman by Congolese federation president Constant Omari, who also sits on FIFA’s ruling council. “We never had a single meeting under his chairmanship,” Obayiuwana said. “I wrote him, more than once, asking for when a meeting would be held. But I never received a reply from him.”

FIFA is an organization that gets a lot of shit. Believe it or not but being a remarkably evil organization rubs people the wrong way even when you’re promoting something as great as soccer. It’s been particularly bad lately, as countless executives have been indicted and roasted in the media for corruption. How do you fix that reputation? When you’re in a hole as deep as the one FIFA currently finds itself, you gotta go really, really big when you try to win the public’s trust back. Answer?

BOOM! Completely fulfill your anti-racism task force’s mission and then let’s see everyone talk shit. FIFA consistently sells its major tournaments to corrupt and third world countries who don’t have the infrastructure to support it? They award the World Cup to places like Russia who jail gays and journalists? They sell the next World Cup to Qatar who’s using fucking slaves to build the stadiums? I forgot all about that because FIFA solved one of the biggest problems in the world. Racism’s gone. It’s #done. It was so fucking easy for them that they didn’t even need to have a meeting about it. If you can’t respect an organization as great as that then you’ve got a serious problem in that skull of yours. Everyone makes mistakes and does a little racketeering here and there, no one’s ever solved race relations that quickly. Fuck “we are the world,” fuck “I have a dream,” just “say no to racism.” Simple as that. Problem solved.