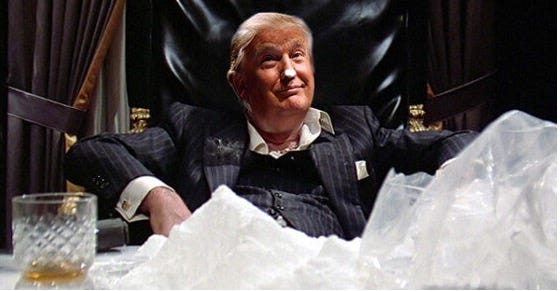 NBC – Viewers tuning in for the rowdy first presidential debate got their fair share of verbal sparring, but amidst the fireworks many appeared distracted by something else: Donald Trump’s sniffle.

While Trump’s opponent Hillary Clinton — whose coughs made frequent fodder for Republicans — did not mention his sniffles, former Democratic presidential candidate and DNC chairman Howard Dean did.

The former six-term Vermont governor took to Twitter not with a meme but with a message, suggesting that Trump’s nasal troubles could be due to cocaine use.

Is Trump a cocaine user?

The Cocaine Checklist has every single block checked off. And those are just hard facts, not even taking the emotions and temperament into consideration. Sniffles were just the icing on the cake.

Seriously if Donald Trump DOESN’T do coke I honestly think you have to kick him off the ballot immediately. Can’t trust a guy like that.

When you rail the fattest line of blow you’ve ever seen then hit the stage to debate Crooked Hillary:

And let’s not act like Hillary wasn’t getting down on her own supply as well, everybody knows you need to get lubed up to take on the Donald.

Oh and by the way, all of it was made up anyway, because there “was no sniffles.”

Guy has gone and snorted himself retarded.

Editor’s Note: saw the KFC 8 AM (wtf?) pre-blog. Left it scheduled anyway. Liked mine better. Probably even put this one in the newsletter.