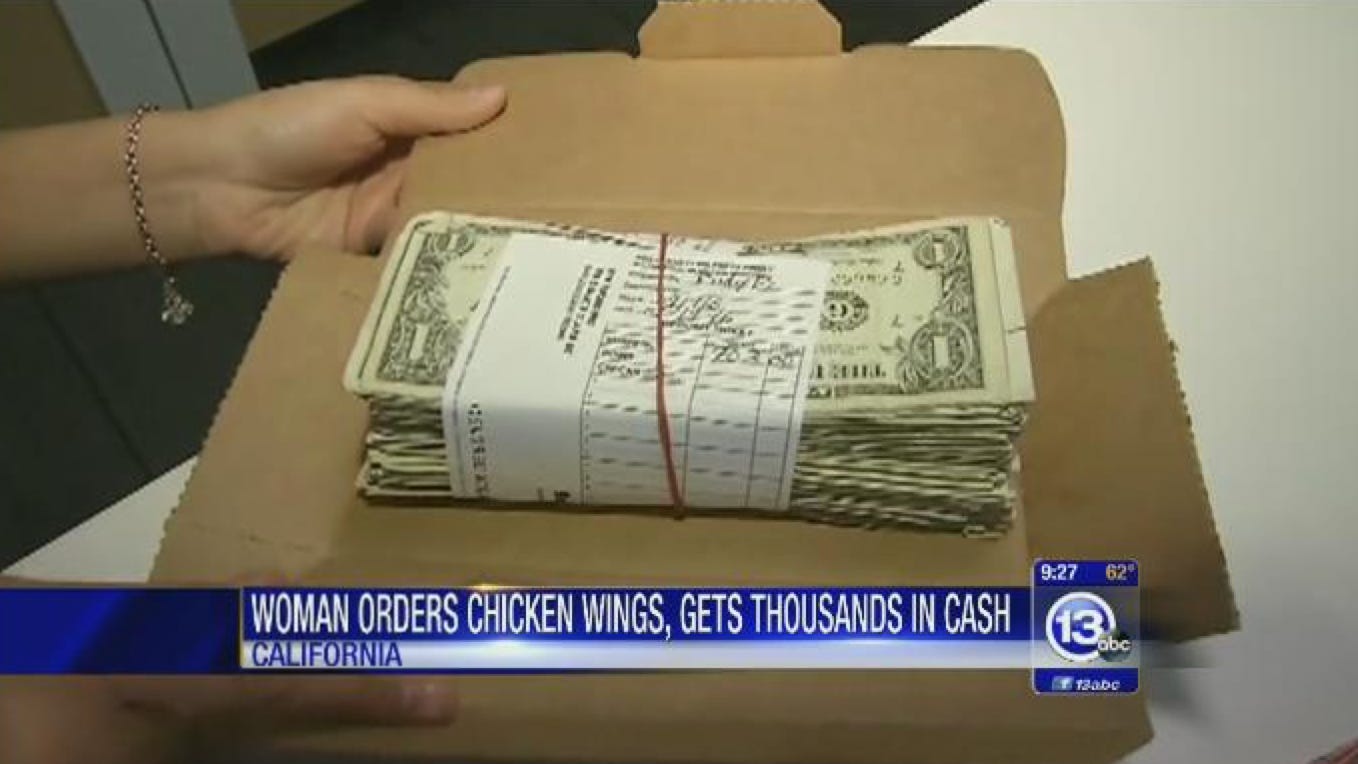 CALIFORNIA (WTVG) – When one woman ordered some chicken wings from Domino’s she wasn’t expecting to get thousands of dollars of cash with it. The woman was working at a Cricket Wireless store when she opened a box expecting her order but instead she found nearly $5,000 set to go to the bank for deposit. “I was like, I can’t keep it, it’s a crazy amount of money, it’s not like it’s $20 you find, you know. It’s almost $5,000,” she said. Thanks to her honesty, Domino’s is giving the woman a year’s worth of pizza and her employer is giving her a week off with pay.

This brings up an interesting question: Would you rather have 5,000 dollars cash or free pizza for a year? And don’t came at me with, “Dominos pizza is disgusting. I wouldn’t even eat free Dominos pizza.” Shut the fuck up. Just shut the fuck up. Dominos pizza is delicious and, if I’m saying that because I’m a Midwesterner who doesn’t know any better, so be it. I scarf down a couple Dominos pizzas a month with a big stupid smile on my face. Call it ignorance. Call it an unrefined palate. Call it whatever you want. I never want to get to a place in my life where I turn my nose up at Dominos or Pizza Hut or Papa Johns. I love those places with all of my heart. They bring me bread covered in meats and cheeses and sauce directly to my doorstep. Anybody who hates that is a snob and I have no time for snobs.

Anyway, so free pizza for a year of 5,000 dollars cash? Despite my words above, you gotta go with the cash. It’s the very simple difference between gift cards and cash. If I get a gift card (AKA free pizza for a year) I can only get things from that specific place. Meaning I would only be able to get Dominos pizza over and over and over again. Which sounds pretty damn great but everything gets old if you have it enough. But if you take the cash, you can spend that money anywhere. You can buy all the Dominos pizza you want while also being able to spend money everywhere else. Kind of a no brainer actually.