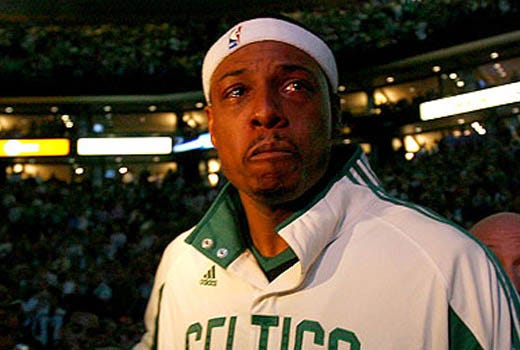 This offseason, @paulpierce34 had one question on his mind.

Today, he has his answer. pic.twitter.com/iV6mELiIE0

That picture right there? That’s how I feel right now. It took me a few days after writing the best KG tribute on the internet to get over his news, now you drop this on me first thing Monday morning? This doesn’t really come as a surprise, the writing has been on the wall for probably the last few seasons, and earlier this month after hearing Doc talk about Pierce, it inspired maybe my favorite blog I have ever written while at Barstool. I’ve been trying to mentally prepare for the formal announcement, but now that it’s here, I am not nearly as ready to cope with it as I thought I would be.

It would only be right that I take some time out of your day to help you celebrate Paul Pierce the person, and the player not because I want to, but because he deserves it.

In June 1998 I was 11 years old and my favorite Celtic at the time was probably either Antoine Walker, or Walter McCarty. Heading into the ’98 Draft the Celtics needed a laundry list of things. Entering Year 2 of the Rick Pitino Era picking 10th, the hope was they would find a cornerstone piece. See in 1998 the Draft was much different then what we see now. Only one player – Larry Hughes – was drafted in the first 20 picks as an underclassmen. Everyone else was a junior or a senior, and Pierce entered the Draft coming off his best season at Kansas where he averaged 20/7 on 51% shooting, they won the Big 12 Conference Tournament, and unfortunately lost in the second round of the NCAA tournament.

In looking at the Celtics roster at the time, they desperately needed a wing scorer. As names started to come off the board, here was a consensus 1st Team All American available at 5, then 7, then when a German unknown in Dirk Nowitzki went 9, I’m sure Pierce was bullshit. But then David Stern said those magical words, and both Pierce’s and our lives were changed forever. Look at who went before Paul and tell me the Celtics shouldn’t be thanking the baby Jesus for their good fortune

As a rookie, Pierce played in 48 games due to the lockout and started 47 of them. His 16/6/3/2/1 with 44%/41% splits narrowly missed out on the Rookie of The Year to Vince Carter and frankly Pierce had the better year. What we saw from him as a rookie was a player who was a natural scorer and more importantly was not afraid of the big moment. Here was the problem though, the Celtics stunk. I mean really stunk. They would win only 19 games his rookie year, and I blame Pitino because how can you not blame Pitino, he was 100-146 from 1997-2001. Fuck that guy

You know what’s crazy about that video? It happened on March 1, 2000, and if you didn’t think things could get much worse, just wait 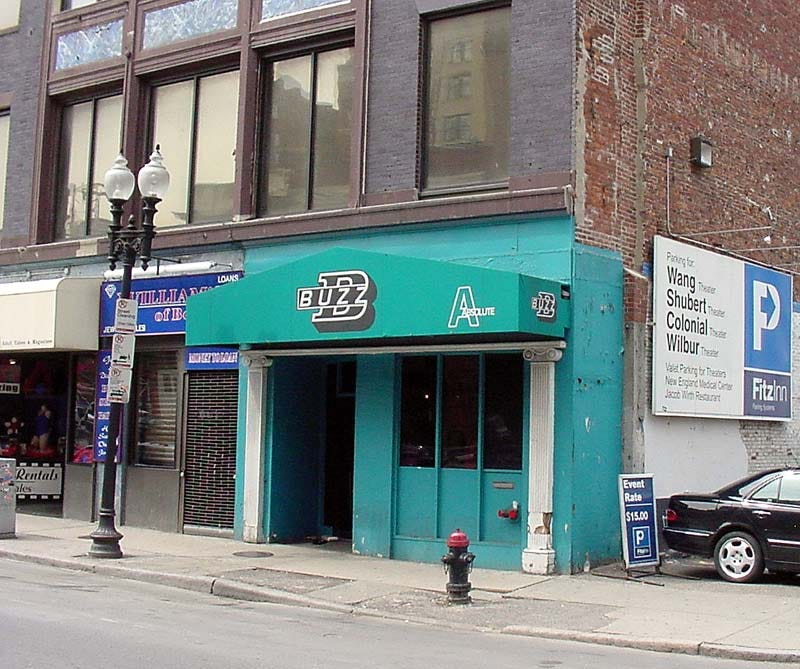 On September 25, 2000 Paul Pierce was living the life of a young rich NBA player in Boston when he went to that night club above with some friends to I’m sure dance and pick up some girls. What happened instead? He was stabbed 11 times in the face, neck, back, and had a bottle smashed over his head. Wait what?????

He had to have surgery to repair his lung, and when you hear him tell the story he was millimeters away from death. Given the history of tragic Celtic player deaths, I can’t imagine what that would have been like. Instead, he survived, got healthy, and started ALL 82 GAMES that SAME season. Not only did he play, he played really well. Like 25/6/3 on 45% shooting well. This was Pierce’s Year 3, or in other words his “leap year” and boy did he leap. Sure maybe they missed the playoffs for the third straight year of his career, but that was all about to change. Pierce made such an impact, from this season forward hed be known as “The Truth”. You know how he got that name?

After dropping 42 points on the Lakers in 2001, we got our answer. “Take this down, my name is Shaquille O’Neal and Paul Pierce is the motherfucking truth. Quote me on that and don’t take nothing out. I knew he could play, but I didn’t know he could play like this. Paul Pierce is The Truth”

By 2002 Pierce was an All Star, made his first All NBA team (3rd) and was the best player in the Eastern Conference. This was the year the Celtics would also fire that dickwad Rick Pitino, gave the keys to Jim O’Brien, and won 49 games. The duo of him and Antione was must watch TV, and after 7 long years, the Celtics finally made the playoffs. How good was this run? Well it took them all the way to the Eastern Conference Finals. Pierce was an absolute monster during this run, and it gave us what could be considered the greatest Pierce performance of his career. Scoring 19 of his 28 points in the final frame, the Celtics came back with the largest fourth quarter comeback in NBA history

What makes Pierce so hard to guard, is that even though he’s never been the fastest player, you could not stop him from getting to his spot. What seemed like slow motion, I prefer to say that Pierce was just efficient in his movements, meaning he didn’t really waste a step. Add that to his automatic step back jumper and it shouldn’t be a surprise he’s 16th ALL TIME in scoring. There is something to be said about how Pierce performed night in and night out, when on a lot of his teams he was the only option.

See Pierce’s tenure with the Celtics wasn’t always peachy. In fact far from it. After that 2002 season, things went back into hibernation, and the Celts were really bad again. Shit in 2005 Trader Danny almost traded Pierce for Chris Paul. After the 2007 season when he got hurt, and the team was allergic to winning games, you could have told me his time in Boston was over, and I’m not sure I could have argued.

The second half of Pierce’s Celtics career is the stuff of fairytales. He finally got the help that he craved for almost a decade. They weren’t really good, they were spectacular. Even with Ray and Kevin, when it came to taking a last shot, more often then not it was Pierce who took it. I think the chemistry of that team was really reliant on how Pierce handled himself. Sure the other guys were going to have to sacrifice, but they were joining a new team. This was Pierce’s team, he’s one of the best players in franchise history, and he put his ego aside for the sake of a championship. That worked out well for him 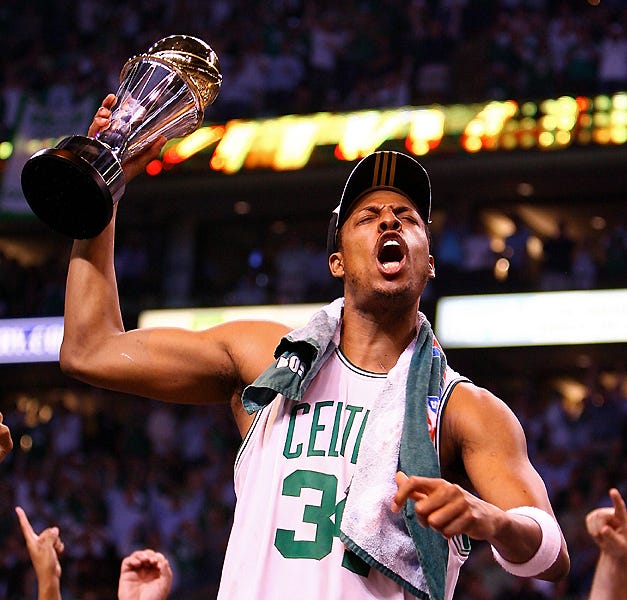 Mike Gorman calls Pierce his favorite Celtic of all time, and for my generation, he was our Bird. Seeing him in another jersey has never felt right, in fact I down right hate it. What he meant to this franchise, this city and its fanbase is something we may not see again for a long, long time. The NBA is just too different now. Guys lose in the Western Conference Finals and then join an already existing super team. As we suffered, Pierce suffered, and for me that’s what makes him so special to me. We bled green together.

Pierce is a 99.7% HOFer according to Basketball Reference and what an 18 years its been. From crazy lows, to even crazier highs, Paul Pierce may have been mad when he fell to 10 in the 1998 Draft, but looking back I don’t think he’d change a thing.

I sure as hell am going to miss him, and that’s not be being dramatic. That’s just The Truth.