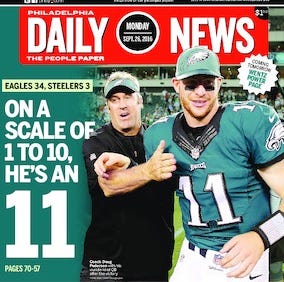 I’m having an existential crisis over here. And here I thought the only thing I could constantly be wrong about is women. But that’s dealing with another species. Football isn’t right in my wheelhouse, it IS my wheelhouse. And ya’ll know me. Ya’ll know how I make a living. For almost a year now I have at best second guessed (and at worst outright fisted) every single move this organization has made. From the shitshow hiring process of Doug Pederson to trading up to get a 1-AA QB to erasing every aspect of Chip Kelly’s influence possible. I mean, shit, if Jeffrey Lurie could pull a Stalin and legitimately airbrush Chip out of photos like the dictator did with traitors it would have been done straight out of spite. This organization seemed to be shooting drunk from the hip with zero direction. What was I supposed to think? I’m sorry, but I wasn’t going to blindly trust a GM that’s had influence over this team for almost a decade with zero playoff wins (including the 2011 “Dream Team”) and his head coach who nobody even thought about giving even an interview. I thought I was using proper judgement.

I’m a man of integrity, and I hereby admit that I was wrong. I don’t care if it makes me look bad, but how can I come out and defend my former beliefs? That type of combined arrogance and ignorance could only be topped by bald headed co-workers who barely speaks clearly around Bob Kraft’s old dangling nutsack in his mouth. Winning fixes everything, and this team is a winner. 3-0 with and absolute 34-3 BEATDOWN over one of the best teams in teh NFL. A +66 point differential (Pats are #2 at +36). 0 TURNOVERS. The play calling is shockingly fresh. This defense plays HANGRY as they lead the world in turnovers and moxie. Wentz is not only the best rookie in the league, but he’s being tossed around as one of the top QB’s already. Should he be mentioned in the same breath as Rogers and Brady? Shit no. But the way he’s handling himself on and off the field…I don’t know, man. We may be witnessing something special.

We’ll probably be cockteased with another Andy Reid like era where we’re good enough to get there but never great enough to win. Why? Because that’s Philly, man. Nothing ever works out the way it should. But I said it a million times that I would love nothing more than to be wrong about this regime, and I am currently escatic to be eating my hat. We’re now all in, baby, and I just broke my shit hopping on the Wentz Wagon. #InDougWeTrust