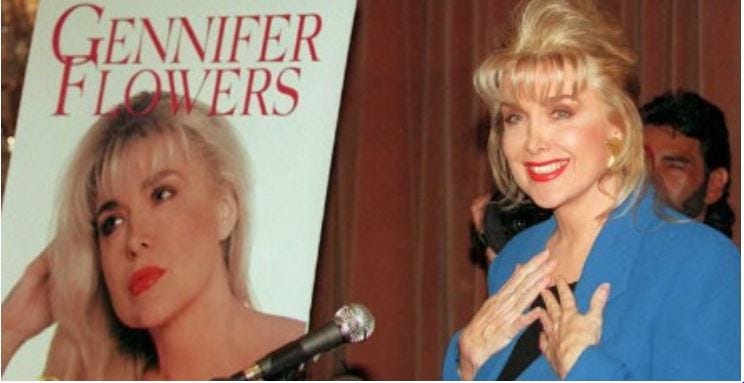 Washington (CNN)Donald Trump threatened Saturday to bring Gennifer Flowers, with whom Bill Clinton admitted to having a sexual relationship decades ago, to Monday’s presidential debate. The taunt is a response to prominent Trump critic Mark Cuban’s plans to sit in the front row of the debate at the invitation of Hillary Clinton’s campaign. It’s the Republican nominee’s latest public reference to the 42nd president’s infidelity, which he has occasionally cited in his campaign to criticize his Democratic challenger. “If dopey Mark Cuban of failed Benefactor fame wants to sit in the front row, perhaps I will put Jennifer Flowers right alongside of him!” Trump tweeted Saturday afternoon. He soon deleted the original message and tweeted again with the correct spelling of Flowers’ first name.

I’ve seen people all over the media world bashing Donald Trump for this threat. My dad who was here in NY this weekend was livid about it. Are you fucking kidding me? This is why I love Donald Trump. Hilary threw the first punch here. She threatened to invite Mark Cuban to sit in the front row. Okay fine. You wanna play hard ball? You wanna play head games? Well just know that Donald is gonna go so far below the belt your head will spin. He’ll bring the chick your husband had an affair with. And spare me the people complaining about this move. Poitics is not for the faint of heart. People will literally do anything to get elected. You think Hilary wouldn’t pull a move like this if she could and thought it would help? Grow up. This is a brilliant by Trump. Good luck concentrating during the debate with Gennifer Flowers sitting in the front row making “pussy eating” gestures right in Hilary’s grillmix.

PS – You know you’re a slut when you spell Jennifer with a G. Also hilarious that Trump deleted his first tweet and everybody thought he suddenly grew a conscious and knew he went over the line, but it was just because he spelling Geniffer’s name wrong and reposted it 10 minutes later.