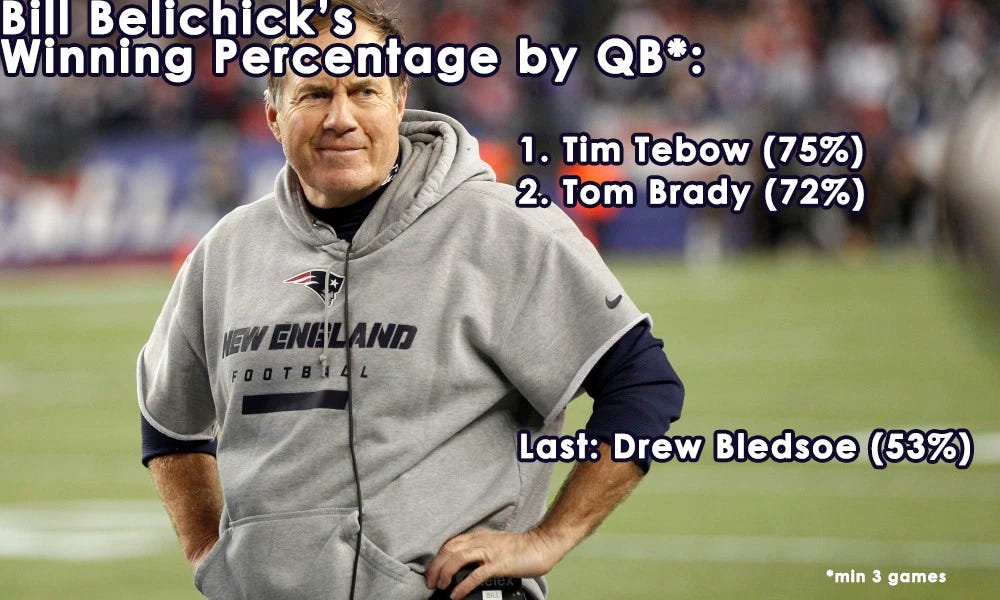 The greatest trick Bill Belichick ever pulled was convincing the world that Tom Brady was anything other then a system QB. In the past 3 weeks, Coach has used a combination of Jimmy Garrapolo and Jacoby Brisset to take the Patriots to the top of the AFC east as is there birthright. But the greatest failure he’s ever had as a coach is his complete inabilty to succeed with Drew Bledsoe under center. Which is why if he ever wants to be taken seriously, he’ll conquer his old demons and bring in the old cinder-footed gunslinger to give him one last win against the Bills this week, or else go down in history as kind of a fraud.

People don’t talk about the fact that under coach Belichick, Tim Tebow went 3-1 and has a virtually identical winning percentage to Tom Brady. Belichicks record with any combination of Matt Cassel, Brisset, Garapolo, Ryan Mallet, Tebow, Hoyer and Doug Flutie, and Vinny Testaverde is just as good at it is with Common Tom. Which isnt a indictment of Brady so much as it is a huge neon sign pointing to just how poorly coached his first “franchise QB” was.

The only statistical outlier is the dismal track record Belichick had with the highest-touted QB he has ever drafted: Drew Bledsoe, who posted a very Jets-like career win/loss record of 53%. Sabermetrically speaking, Belichick would of literally had about the same expected wins if he had started a coin-flip at QB instead of Drew. If there’s one thing besides the rampant cheating and constant lying that might keep Belichick from being a Hall Of Famer its his utter failure to develop what many people saw as the most surefire number 1 overall pick since Bo Jackson into a franchise QB. Coaches have been fired for much much less.

Bledsoe never won the Big one either, even though he had a opportunty to win his spot back from SystTom Brady in the AFC championship game. But he didnt have Bradys WASPy recevers so he choked like his throat was swollen up by a bunch of bee stings, and barely even got them into the Superbowl just to have his backup cuck-snatch his job during the bye week. You think Bledsoe dosen’t want a chance to win his job back? Get real.

And now Belichick has a opportunty to prove once and for all that he’s not just a 6-trick pony by correcting his biggest failure in life. Tom Bradys entire career is based off Belichick’s failure to harness Bledsoe. Bledsoe is Jennifer Anniston and while his relationship with Coach made all the sense in the world on paper, we all knew it wasnt meant to last when there was Tom Bad Girl Bradgelina lurking behind the scenes. They say a tie is like kissing your sister which is ironic because Bledsoe’s career winning percentage reminds me so much of  Billy Bob Thorton.

A look at the schedule shows that the Patriots  are hosting the Bills this week. They’ve got one QB with a seperated shoulder and one with a thumb that looks like it was attached to Fred Willards wrist before getting shoved down a garbage disposal. This is the perfect time for Bledsoe to sign a one-year deal and perhaps even take the job back from the Brad Psi-tt, and see if Belichick can fix the biggest black eye marring a otherwise very good track record.

Road Grader of the Week: The Entire Stanford Offense of line:

1. Dont let anyone ever tell you that Jimmy Garappolo dosen’t know his history. The Pats QB got a real kick out of a video parody about a bunch of patriots that kicked an Arians ass. 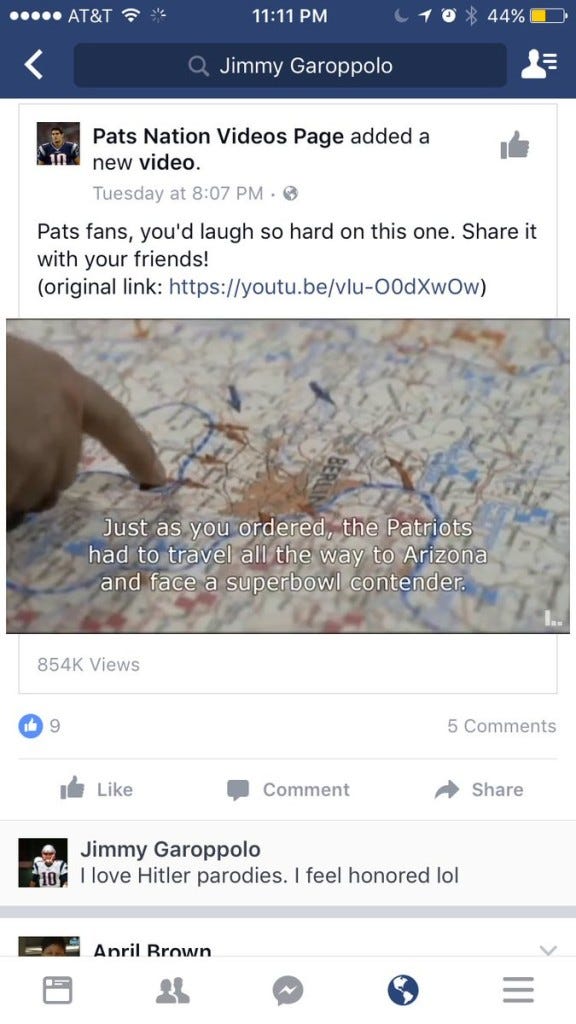 2. Danny Woodhead underwent sucessful ACL surgery and is officially on the mend. The only silver lining to this injury is the fact that now we get to experience Vicodin Woodhead putting the Opie back in opiates. This realy made me think:

3. Ryan Fitzpatrick spent his college life caring more about his GPA then his YPA so its not really a suprise that every once in a while he needs to blow off some steam with a pass fail type game.

Folks I havent seen a Jet responsible for so many wounded ducks since Sully Sullenberger was at the controls.

4. In probably the strongest take of all time, some guy wearing a Jake Utler jersey at the Broncos game filled in his “I stand up for” cancer sign to read “the national anthem”

Thank you to this guy for taking back the cultural appropration of standing from supporting people who are suffering from cancer and returning it correctly to being a vaguely militiristic display of imposed patriotism.

5. The Cincinatti Bengals got hypotized before there game against the Broncos and came out looking very sleepy. Trevor Sybian got rode hard and put away wet as Denver offense finally demonstrated a pulse. Plus the whole epidemic of players putting “Sr” on there backs is reached the tipping point.

6. Terrelle Prior reminds me of a poor mans Matt Jones except with character issues what with the tattoos and all. It is the most very Browns thing possble that there best qurterback is also their best Wide Receiver. Prior lit up the Dolphins for a big day catching and passing the ball, in a scathing indictment of Giselle Bundchen football IQ.

7. The Building 7 non-contact injury of the week award goes to: Me. Broke my foot by literaly walking down a street. I stepped on it Not using that as a excuse at least until later on in the week where I get to take painkillers and it will dirastically affect the quality of my writing for either the much much better or the much much worse. Maybe both. But silver lining- I can use “Metatarsal? Hell I never even saw one” as a great joke intro to any babes that come up to me to talk about whether Im hurt or injured.

Speaking of feet, NASA took some time off from organizing a vast unprofitable conspircay to manipulate global temperature records to sneak a dig in on the Ryan brothers about how there ruining Buffalo. Maybe astronauts should be spending more time studying the sea of tranquilty than Lake Eerie. Maybe if they discover a way to run a 3-4 defense with 4-3 personel on the moon, Americans will start caring about it again.

8. On todays Pardon My Take, Eli Manning offically refuted a earlier report that the Patriots would reach out to Peyton to fill in for Brissett and Gawopowwo. Just another casual day in the biz breaking the biggest stories everyone else is afraid to touch.

9. Joe Flacco showed what a real duel threat QB looks like- someone who can beat you with his arm or with his eyes as he looked the safety off untill they were literally almost off the field and then ran in for an easy 6. Wild stat here: Flacco now has more rushing TDs then Jamaal Charles, Adrian Peterson, RG3, and Colin Kapernick, and Leveon Bell combined. Your eyes are faster than your feet and if you can manipulate your opponents into taking themselves out of the play then it means that even though Flacco isnt lighting the 40 yd dash on fire anytime soon, the Ravens QB is technicaly fast as the crow flies.

69 of the week: Drunken Artie

“Drunken Artie” is kind of a redundant name IMO. There are no Arties who are CEO of a Fortune 500 company, and no one has ever been introduced as “hey honey the babysitter, Artie, is here.” 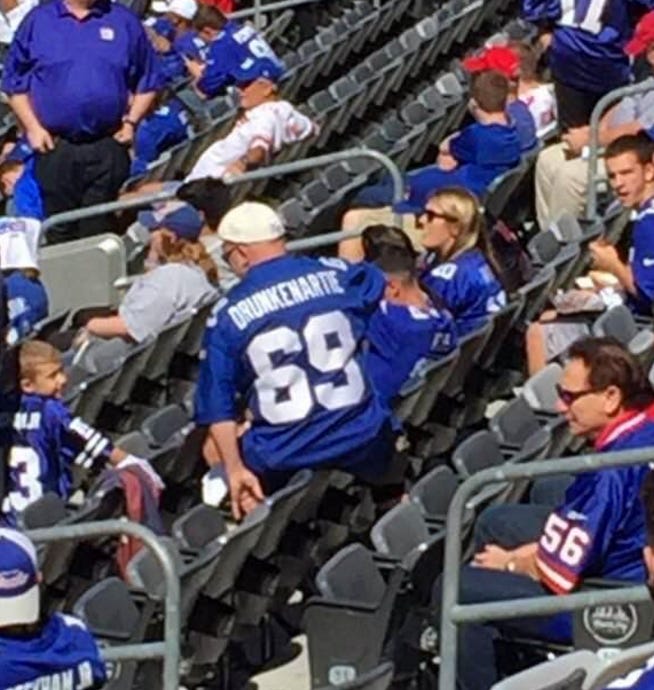