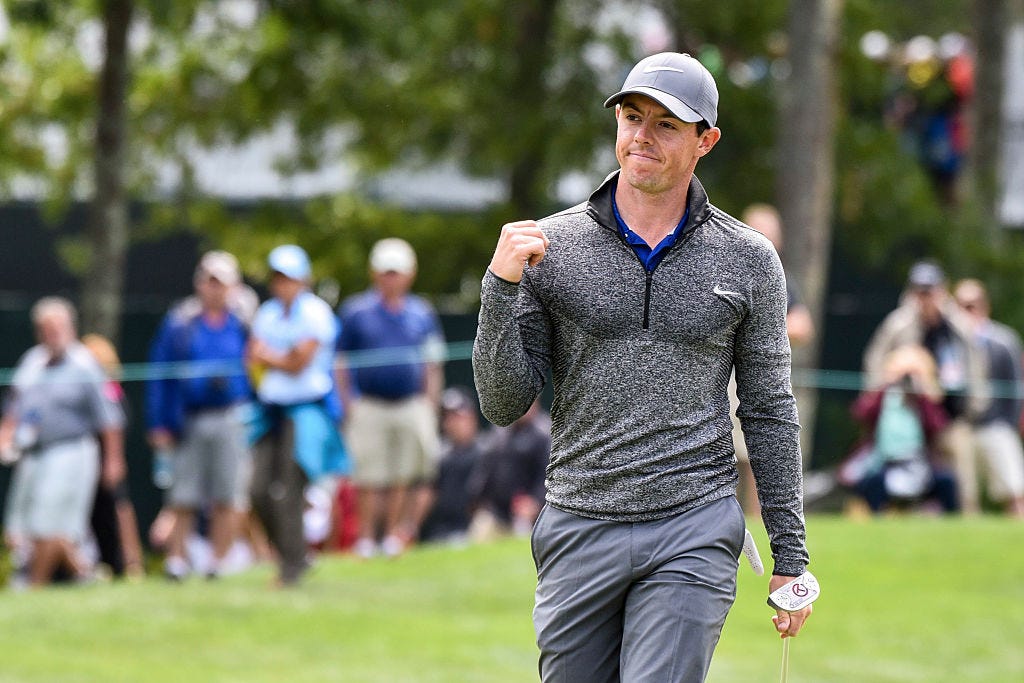 Rory’s 64 to DJ’s 73 cost DJ the $10 million FedEx Cup first place bonus (he still wins $3 million). The stellar round earned Rory a spot in a 3-way playoff with Kevin Chappell and Ryan Moore. After ripping his drive 357 on the first playoff hole, Rory stuck a long iron to 5 feet and went golf swag city with this club twirl.

Club
Twirls
For
The
Girls pic.twitter.com/mrZVoLBVEF

But then he missed.

On the second playoff hole, both him and Moore hit it in the left rough. Rory had some tree trouble. Naht.

"He better be careful here."

They both parred. Third playoff hole? Rory had this for par to extend the tourney.

And we are going to a fourth playoff hole.

This par putt sends the guys to 16. #QuickHits https://t.co/ISblB8lWsM

Nails. Then they went to the 16th for the fourth playoff hole. In regulation, Rory played the hole like this.

Rory McIlroy! One back with two holes to go.

This time it was a little different. With Rory in pretty tight for birdie, Moore faced this must-make for par.

Nails. But then Rory did Rory things…

Again, 5 days until the Ryder Cup.

The silver lining to all this? My prediction game is on point. I picked Rory to win and 12-under as the winning score (Rory won; the playoff guys all finished 12-under). No big deal. Riggs is a genius. A very bold, risk-taking genius.

So now the last order of business before we officially move on to the Ryder Cup is for US Captain Davis Love III to pick the 12th and final US player. He’s doing that tonight during halftime of Sunday Night Football. The 3 favorites on the short list coming in were Bubba Watson, Justin Thomas and Daniel Berger. Many believe Ryan Moore earned that spot today.

Many also believe this guy earned his spot.

This guy for the final captain's pick pic.twitter.com/jOSiUjbsAo