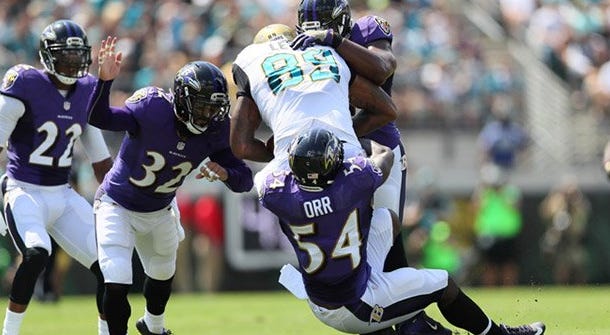 What a difference a year makes. A year ago I found myself dejected, trying to figure out how the Ravens found themselves at 0-3 after the Ravens found themselves on the wrong side of a game-deciding play in 3 consecutive weeks. Now they’ve eked out 3 straight wins in a very similar fashion. Is it the improved secondary? Is it the weaker schedule? Is it that we’re healthy? Is it luck? Hell, I don’t know. It’s probably a mix of all 4 of those things.

I love being 3-0, but it’s also tough to ignore that most of those factors aren’t supposed to be sustainable. Having said that, there’s also plenty of reason to believe that the Ravens should be winning these games by multiple scores. The offense looks like it’s close to turning a corner and has left a lot of points on the board. They’re outgaining their opponents, controlling the clock, and earning more first downs. All in all, there’s more reason to believe the Ravens are underachieving than there are red flags that they’re overachieving. They’re 3-0 despite a negative turnover differential. Maybe the Ravens aren’t as lucky as you’d think. They’ve earned all 3 of those wins, and have a great opportunity at winning the next 4 going into the bye. With the way this schedule is set up, the Ravens HAVE to take advantage early and jump out to a lead in the division, and that’s exactly what they’re doing. Can’t ask for anything more. More thoughts on yesterday’s game:

– Joe Flacco was on fire for most of this football game, shattering his own franchise record and taking a run at the NFL record for consecutive completions. Of course, the streak was ended at 21 when Mike Wallace was unable to haul in a perfectly thrown ball in the end zone. He may not have been chucking the ball deep as much as I’d like, but he was throwing darts all over the place. The first interception was really his only poor play, and looked like more of a miscommunication on the route between him and Pitta. Pitta was wide open in the seam, and it looked like Joe threw for a corner route. Either way, an ugly interception. The 2nd one wasn’t on him. It was really great to see him roll out of the pocket and get those legs moving again.

– It looks like Terrance West is slowly but surely taking over the reins at RB from Justin Forsett. West got 10 carries to Forsett’s 7 and was far more productive, averaging 4.5 a carry. With the way Flacco was chucking it, it’s understandable that we didn’t run the ball as much as maybe we planned to, but it’s looking like West is the guy on 1st and 2nd down at. Forsett did catch 6 balls, but only got 12 yards out of it. Hardly anything to write home about. It’ll be interesting to see how this all plays out once Kenneth Dixon gets healthy though.

– Steve Smith had his whole tiff with Ramsey, and had himself a nice game too. 8 catches for 87 yards, and had a couple of those drives where it looked like he was putting the offense on his back. I still think he’s easing his way back in with the achilles (the broadcast even said that leg is noticeably smaller than the other, gross), so things are looking up on the SSS front.

– The O-line played a decent game, but drew a few too many penalties for my liking. Stanley got nabbed for a holding and a false start flag, and Yanda added a holding flag too. They’re not getting as much push on the ground as I’d like to see either, but it hasn’t been a total disaster on that front. Keeping Joe on his feet is objective A and they did an okay job of that for the most part, only allowing 2 sacks. The concerning plays are

1.) the play-action where Yanda pulled left, and Zuttah completely failed to slide over and get a piece of Malik Jackson coming through the gap,

2.) Stanley failing to keep fellow rookie Yannick Ngakoue in front of him, causing a strip sack that Joe was lucky enough to fall on, and

3.) Dante Fowler getting a hand on Flacco’s arm to cause that 2nd interception (although I chalk that up to as much Fowler making a great play than Wagner making a poor one)

So plenty of room for improvement for the O-line, but they’re not losing this team games.

-The defense is carrying this team right now. The Ravens are currently 2nd in total defense, 4th in points allowed, 3rd in passing D, 10th in rushing D (and would be 2nd without that Crowell run), and 2nd in first downs allowed. This is a very good unit, and I can say that with confidence after yesterday’s game. The Bills and Browns are kinda meh offenses, but Jacksonville really has some guys that can strike fear in the opponent. Holding them to 216 total yards is no small task. On top of that, they didn’t allow a single first down in the 4th quarter. That’s how you close out and win ball games. Well done.

– I can also say with confidence that Eric Weddle is the difference maker for these guys. He swarms the ball on those short routes, plays physical Ravens football, and hasn’t allowed any deep balls all year. He even made a helluva play in the red zone to swat away what looked like a sure touchdown. I love the way this guy brings the intensity and leads the troops. Godsend.

– Tavon Young has been a wonderful surprise at nickel. Yes he earned a key interception in the 4th quarter off a tipped ball, but it goes beyond that. He’s always in position on his guy in the slot, and has made some nice plays in coverage on special teams too. He was largely overlooked in this year’s draft class, but he’s proving he belongs so far. I’m excited for the kid.

– Timmy Jernigan is coming on strong. He had the opportunity to really make a name for himself when Ngata was traded last season, and he didn’t seize it. This year he’s come back determined to be the guy in the middle, even outplaying Brandon Williams. The 2 passes he swatted late in the 4th quarter made a huge impact in the final result, and his sack killed a drive earlier in the quarter too. Some of these young guys are really coming along.

– I think Ozzie and Dean Pees made a concerted effort to move towards a faster LB group when they dropped Daryl Smith, and it’s paying dividends so far. Zach Orr has struggled at times with the run (see 85-yard TD run last week), but he’s been pretty damn good in coverage and was rewarded with that game-ending pick on the last drive.

– Speaking of LB’s, CJ Mosley is putting himself firmly in the “best ILB in the NFL” conversation with his play so far. He moves so well from sideline to sideline and made a helluva one-handed pick on a Bortles duck yesterday.

– The one black eye on defense is Shareece Wright. Honeymoon’s over after that week 1 performance, he flat out stunk at times yesterday. Got completely turned around on the short TD pass to Robinson, and got beat over the top on a 2nd one. And yes, it’s frustrating that they overturned that call in the end zone. I agree that that should be called a catch in general, but it’s frustrating that that call has basically been upheld as an incompletion in every circumstance except when it happens on us. Whatever.

– Special teams was a mixed bag. On one hand, Devin Hester nearly lost us the game with the muffed punt and punt coverage gave up a lengthy return that lead to a TD. Yet, a blocked FG and another clutch Justin Tucker FG was the difference in the game. I’ll take it.

– The muff was so unnecessary. The punt was clearly short, and it wasn’t a situation (up 2, 9 min left) where we were dying to make a play. You’d think a vet like Hester would know to let it bounce, and if it bounces right to you, catch it and fall forward. Just take the yards and make sure we have possession so we can chew clock. It resulted in a Jags FG and a 17-16 deficit. Unacceptable.

– I saw at least 2 blocks in the back on the aforementioned long punt return, so I kinda forgive the coverage team for that.

– Brent Urban is a kick-blocking machine. I noted when he was drafted that he lead FBS in passes blocked and blocked a few kicks in college too, and that success has translated to the NFL. He blocked the FG to beat the Browns on MNF last year, he blocked one of the kicks last week, and his block yesterday was a HUGE play that kept the lead at 1 instead of 4 with 3 minutes left. Bravo.

– And of course, the man of the hour… Justin Tucker. Guy just has unreal onions. 54 yards and that baby was absolutely PIPED with at least 10 yards to spare.

So there we have it. 3-0, first place football team. Not a perfect football team, but one that gets the job done. They’ve got Raiders and Redskins at home, and then the two NY teams on the road before hitting the bye in week 8. 7-0 is not out of the question by any means, but none of those games are cakewalks either. Gotta fight and scrap for every one of those W’s, because it’s tough sledding after the bye. All in all, can’t do better than 3-0. Great start and a great time to be a Ravens fan.