I’m not upset that the Giants lost a football game. I’m upset because they led me to believe they were done pissing games away like they loved to do last season.

The first half started swimmingly. Offensively, the line created space for Vereen & Darkwa while Eli was surgical. Their balanced attack put up 21 points while the Big Blue defense thrived yet again in holding the opposition to 3’s. Up 21-9 with about 4 minutes left before halftime, the Giants completely controlled the game. Then a familiar foe began the unraveling. Cousins connected with D-Jax on two consecutive plays for 75 yards & a score to continue his role as Giant-killer. Shane Vereen then dropped the “duke” right outside FG territory with under 90 ticks left, allowing the Skins to march to the NY 4. If not for Cousins’ idiocy taking a sack as time expired it would’ve been free points for Washington. Still, the good guys were up.

The second half was the true shit show. After avoiding the big play against in their first two victories, Spags’ D was beat again early in the third quarter. An “I surrender” WR screen on 3rd-and-15 turned into 55 yards & a Redskins lead thanks to some sweet “tackling”. Then they answered a Giants FG with one of their own to open the 4th after converting a ballsy fake punt needing 12 yards at midfield.

Big Blue’s first possession in the 4th started with a fearless catch across the middle by Sterling Shepard & a bonus 15 tacked on thanks to a high Norman hit. Beckham then torched his nemesis on two consecutive plays that SHOULD have resulted in a first & goal at the 5 – but the Giants couldn’t help themselves. A second unsportsmanlike on Winston Richburg for burying & taunting Norman behind the play not only pushed NY back to the 20 but made him the first player to get tossed by the new “ODB” rule. Just an unacceptable lack of discipline in a key spot…followed by an unacceptable lack of effort out of Will Tye at the goal line that ended up a one-handed INT…followed by this: 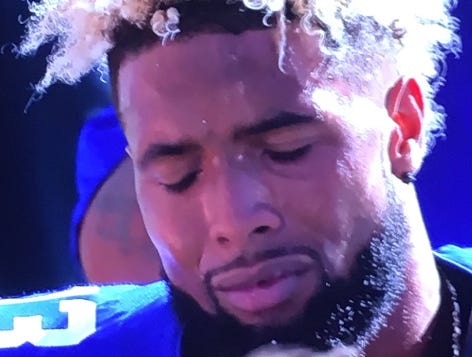 I love ODB. Love his passion & love how he dominated Josh Norman in the second half while keeping his cool between the lines. Still a LONG way to go though before he’s no longer considered a head case. Can’t let your team see you having an all-out tantrum on the sideline while still in a game that can go either way. Not if you wanna be the guy your squad leans on. Just come out already, bro. It’s 2016. Let the pressure go.

The embarrassments weren’t done though. A Giants blocked punt & prime field position was nullified by ANOTHER senseless penalty. A roughing the passer penalty helped sparked Washington’s game-winning FG drive. Victor Cruz helped NY get over an ODB offensive PI call with barely over a minute left, only to have Eli Manning throw a HORRENDOUS pick despite staring down Vereen & seeing him blanketed. An all-out disgusting final 30 minutes to pump the brakes on any high hopes fans were having after a 2-0 start. I guess that’s our own fault though. We should know better.