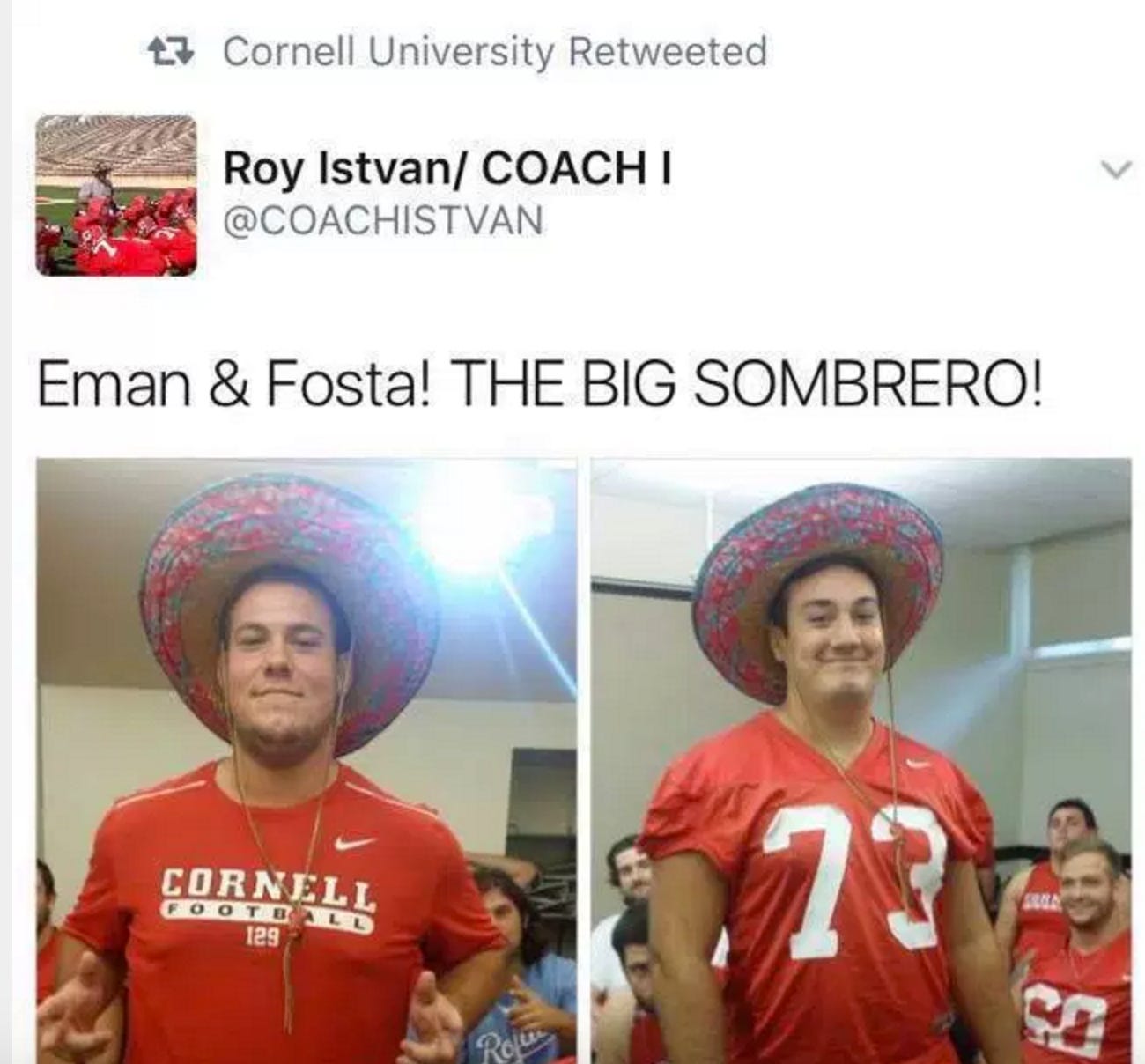 Cornell Sun - Fresh off the heels of Cornell football’s first win of the season, offensive coordinator and line coach Roy Istvan received backlash after tweeting a picture of players in sombreros, with the caption “Eman and Fosta! THE BIG SOMBRERO!”

The tweet was criticized by Movimiento Estudiantil Chicanx de Aztlán de Cornell, or MEChA, a student organization that “promotes higher education, cultura and historia,” according to their national website.

“I think this is indicative of the problem that a decent portion of Cornellians kind of don’t have sympathy for one another,” said Barbara Cruz ’19, the secretary of MEChA de Cornell. “Cornell prides itself on ‘any student, any study,’ but it kind of feels as if a lot of people don’t want us here.”

Cruz added that she feels the tweet is another example of Cornell trying to be “funny” and “wacky,” but said she does not understand why their enjoyment comes at the expense of the latino community. 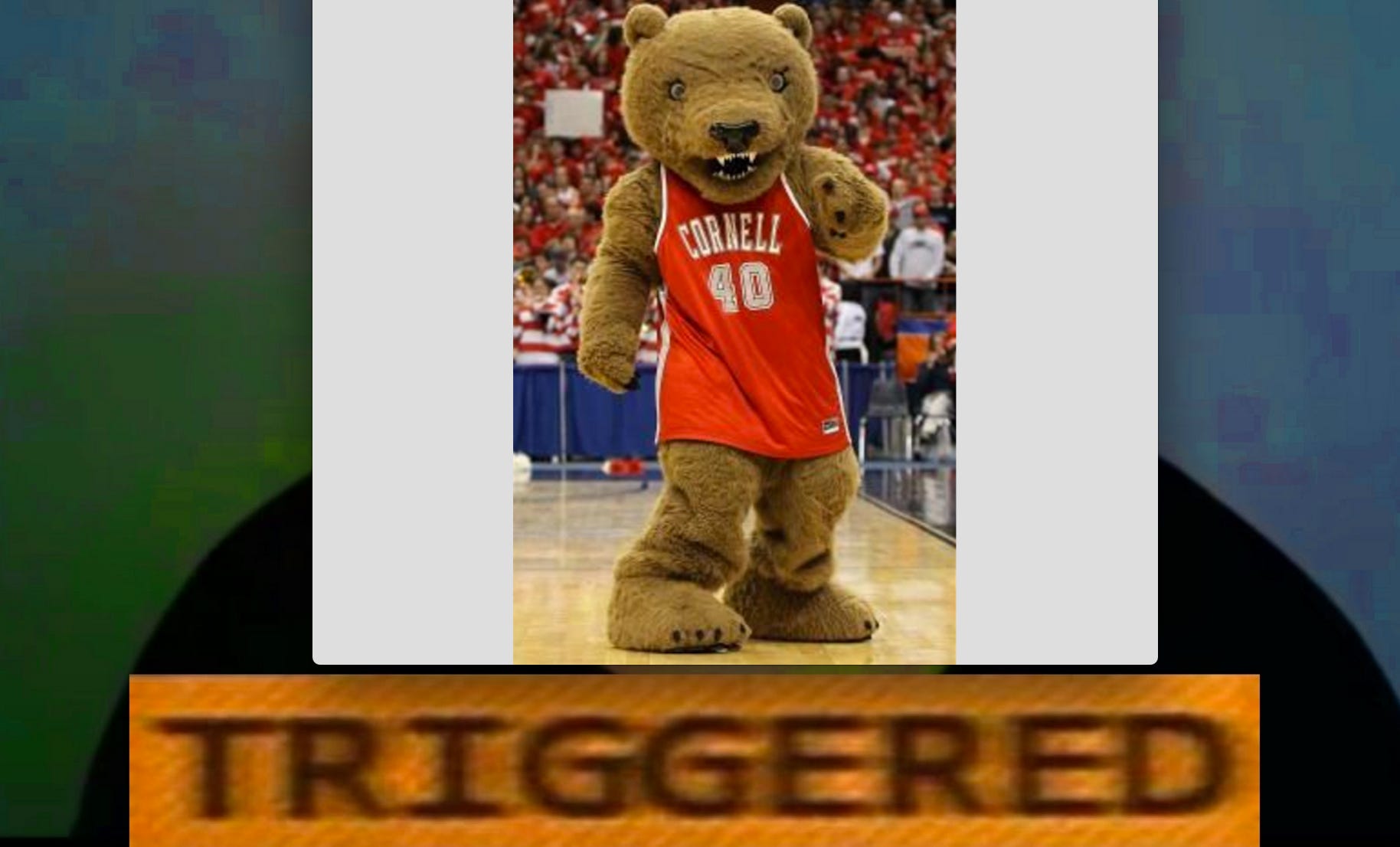 Culturally appropriating like a motherfucker. Now is it a tradition for Coach Istvan to “award the big hat to team members who represent the best teamwork and winning spirit on and off the field”?? Maybe, sure, a possible explanation. More likely? To maliciously use it as a violently offensive trigger to the Latino community.

The picture of linemen John Foster and Alex Emanuels Istvan’s caused a firestorm on social media, especially because the tweet — which has since been deleted — was retweeted by the University’s official twitter page.

Even if the University did not add any language to Istvan’s tweet, the fact that they retweeted the message was upsetting to many Cornell students.

“[I am] absolutely embarrassed to attend a university that publicly, or not publicly, supports this [tweet], and hope to work collaboratively to ensure that university communications, and all staff and faculty, receive much needed diversity and cultural sensitivity training,” Matthew Indimine ’18, the executive vice president of the Student Assembly wrote in a comment on MEChA’s post.

“Choosing a sombrero to celebrate accomplishments by Cornell University Athletics sent the wrong message to the community,” athletic director Andy Noel wrote in an email to leaders of MEChA de Cornell. “Even when in celebration, misappropriating these symbols can devalue cultures, extend negative stereotypes and needlessly offend others.”

Hoping to mend the wounds caused by this incident, Noel added that he and the athletic department aim to address the cultural insensitivity problem across campus.

“On behalf of our coach and football program, I apologize for this oversight and any sense of disrespect it caused,” he continued. “I look forward to working with our campus partner to reinforce our awareness of these issues.”

Only the Latino community outside of the football team though. The Mexican players, their thoughts don’t count.

Despite the outcry, Gustavo Dorsett, a sophomore safety on the football team of Mexican descent, does not believe the tweet is offensive, and instead said he believes it celebrates his heritage.

“I am having trouble seeing how this in any way is so offensive,” he wrote on MEChA’s post. “If I showed this picture to my family in Mexico they would certainly laugh and be excited that our team incorporates a part of the Mexican heritage in celebrating our player awards. This is being blown up by sensitive people on social media who aren’t even of relevance to the Mexican culture.”