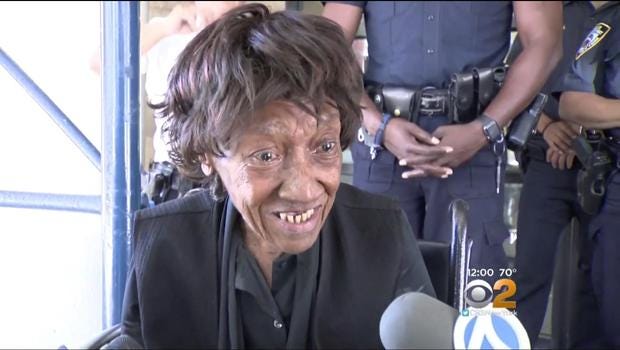 NY Post- Feisty mugging victim Bernice Starnes is furious that her purse snatcher is getting a no-jail sentence. “They give that bitch five years’ probation — no jail time?” Starnes, 85, complained Thursday after learning that Adrianne Terry, 37, had just copped a probation-only deal in Bronx Criminal Court. But there was a silver lining for the outspoken octogenarian — she was delighted to learn that Terry started sobbing in court after the judge told her to stay in jail until her Oct. 7 sentencing. “Drown in your own tears,” Starnes said. “And if you need more water to drown, I’ll throw you in the East River and let you drown drinking it.”

Terry was warned in court that she could get four years in prison if she steps out of line during her five years of probation. The cocky mugger appeared to expect Judge Marc Whiten to grant her attorney’s request that she be released immediately. But the judge was having none of that, noting, “This case has gotten some notoriety because of the age of the complainant,” before ordering Terry locked up again. Terry admitted snatching the elderly lady’s purse on Sept. 11, as she sat in her wheelchair. When Starnes yelled, “Give it back!” Terry heckled, “Why don’t you run after me and get it?” “She better not come around me again, because I’ll kill her with a gun,” Starnes said Thursday, clutching her purse protectively.

Lock your windows, close your doors. It’s Bernice Smalls! God I love when old people say exactly what’s on their minds. Too damn old to give a shit about a filter. Just a vicious quote game right there. Me? I would be mad as hell if I got mugged, but would probably just internalize my anger and eat my feelings.

But not Bernice. Her mugger probably thought it was the perfect crime. Stealing candy from a baby has nothing on stealing currency from an elderly woman in a wheelchair. And mocking her with the “Why don’t you run after me” taunt after stealing her purse is at least a 15 yard penalty. But little did Adrianne Terry know that Bernice is a wolf in sheep’s clothing. The baddest bitch on the block. In fact, I am going to put a blog in drafts right now about Bernice killing Adrianne. Because I honestly feel like there is a 50/50 chance of it actually happening.

Come at the queen, you best not miss.