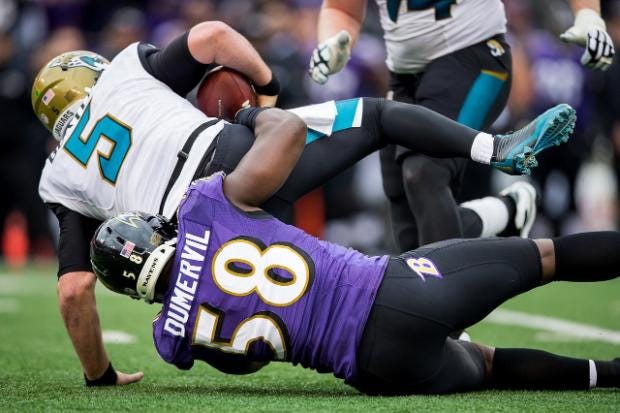 The 2-0 Ravens head to Everbank Stadium today to try to avenge a ridiculous home loss from last season. For those who still remember, a missed false start that should’ve ended the game lead to Elvis Dumervil facemasking Bortles on a sack…. which lead to a dagger 53 yard field goal and a Jaguars 22-20 win. It may have been the epitome of the 2015 season and certainly felt like rock bottom at the time (until Flacco shredded his knee a week later). Anyway, the Ravens are much healthier this time around and face an 0-2 team desperate to turn their season around.

There’s one thing I think we can all agree on. The Jaguars are a much more talented and capable team than the Bills and Browns teams the Ravens have gone up against so far. The Jags have one of the best young WR duos in the league, a QB who can really sling it, and they have their backs against the wall already. They’re gonna be aggressive and throw the ball down the field. The Ravens’ secondary may statistically be the best secondary in the league in terms of YPG, but I can’t really buy the notion that they’ve made a leap until they do it against a competent pass attack. They’ll get that today (and next week vs Oakland). That’s the key to today’s game. Keep Hurns and Robinson in check, try to put some pressure on Bortles (especially given 2 of their O-lineman are out) and chew some clock with a balanced attack on offense. I expect it to be a tight one, and hopefully the Ravens can put together more than just 30 minutes of good football this Sunday.