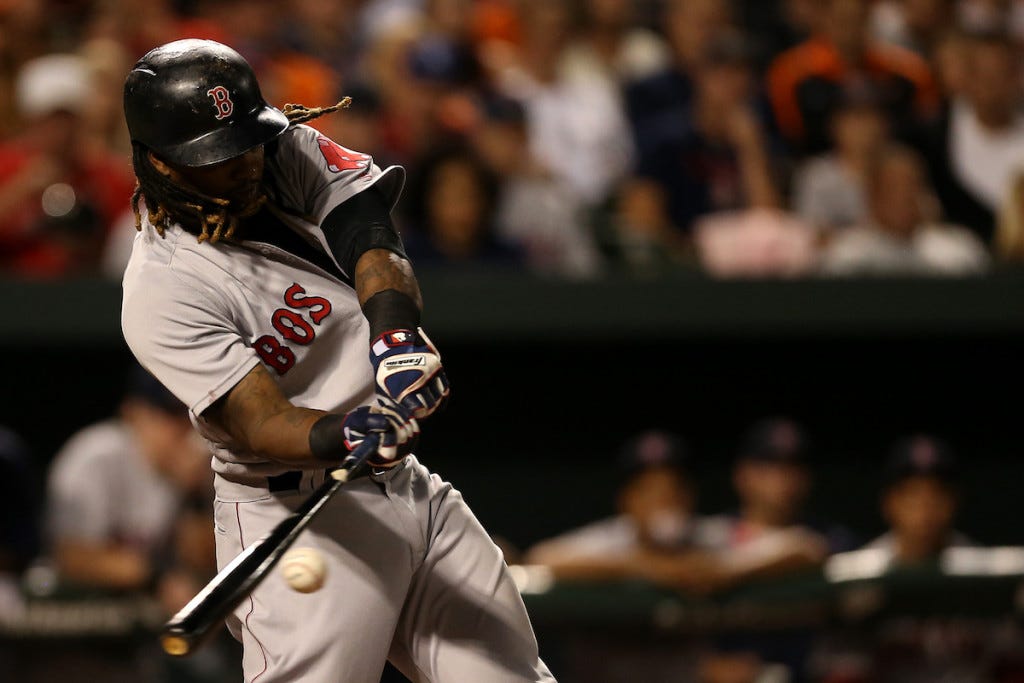 Goodnight, Baltimore Orioles. You put up one hell of a fight, I’ll give you that, but I’ll say right now what I’ve been saying all year long when you were in first place — you’re not that good.

The Red Sox came into Baltimore, fresh off a four-game sweep that essentially eliminated the Yankees from postseason contention, and then beat the hope out of the Orioles’ chances to win the American League East. Baltimore has spent 111 days of the 2016 season in first place. They had never been more than four games back of first, and they had only been that far back for just three days spread out over the last month.

The Orioles came into this four-game series with Boston only three games out of first place. A sweep would’ve had them back in first place, a game up on Boston. They needed a sweep, and they got swept. They’re now seven games out with nine games to go. Might as well be a million games out. Division hopes are dead. The Red Sox came into Camden Yards, beat the living piss out of the Orioles, and while that stupid orange bird was flat on his back, looking up at the lights, the Red Sox knelt down by the head of that bird and said, “Look at me. Remember this face. I’m the one who did this to you.” And then they left.

David Price got the ball in this one, coming off his first start of allowing more than three earned runs since August 2. He was good, not great. Went seven innings, issued a couple of walks, and the three earned runs that he allowed were on a three-run bomb off the bat of Trey Mancini, who homered in his major league debut against Eduardo Rodriguez on Tuesday night, and then again off of Price last night. A full major league season for a starting pitcher is roughly 30 starts. Over Price’s last 26 starts, he’s thrown 177.1 innings with a 3.25 ERA, 1.13 WHIP and 169 strikeouts.

But the one thing that I noticed about Price in that outing that I haven’t seen much of all year? Emotion. Watch that video clip from last night. Nobody wants to be the guy who’s responsible for ending a good thing that your team has going this time of year. Price knows that October is right around the corner. He was fired up, and I think Red Sox fans have been waiting all season long to see that side of him, because it’s in there. We know it’s in there, because we saw it first-hand in the 2008 American League Championship Series.

After Price exited after the seventh, the Red Sox got two more scoreless innings from Koji Uehara in the 8th and Craig Kimbrel in the 9th with a pair of strikeouts each. We’ve been on this since probably 10 days into the month that what the Red Sox bullpen has been doing is just stupid good. Here we are with a week to go in the month, and the Red Sox still have a list of EIGHT relievers who have combined for a zero ERA.

Fire it off — Brad Ziegler, Koji Uehara, Junichi Tazawa, Craig Kimbrel, Robbie Ross Jr., Joe Kelly, Matt Barnes, and Robby Scott have thrown 43.2 innings in the month of September with 57 strikeouts, a 0.94 WHIP, and a 0.00 ERA. They’ve faced 170 batters and struck out 34% of them. That’s pretty much your postseason bullpen right there, give or take a guy. I think Scott has proven that he should be the second lefty on a postseason roster over Fernando Abad, and although he’s had a solid September, I’m still not crazy about Tazawa making it on there over Heath Hembree, which means that Tazawa will probably be pitching the 8th inning of one-run games.