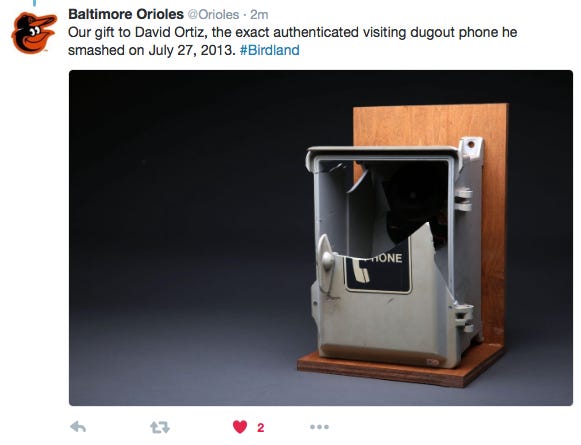 I hate these retirement tours. I hate the gifts, I hate the pregame ceremony. Not just for Ortiz, but for Jeter, Kobe, and anyone else who has ever had one. I’m sure Cal had one, but I was too young to remember, but that’s besides the point. The Orioles have been TORTURED by David Ortiz since he first put on that #34 for Boston. Going into the game tonight, Ortiz had played in 246 games vs the O’s and has 244 hits, 58 doubles, 4 triples, 136 runs scored, 55 home runs, 2 STOLEN BASES, 176 driven in, 156 walks, a career average of .269, a .378 OBP, slugging .524, and a career OPS of .902. The only teams Oritz has homered against on the road more are Toronto (41), Tampa (34), and New York (31). Ortiz has gone yard at Camden 30 times, and I feel like all of them have been in a big game, or late in the game. He has made me rip my hair out, throw things at the stadium, curse at kids who aren’t in preschool, and I can’t wait to see him leave Baltimore for the last time EVER. Over the last 10 years, he has been the guy who has been the thorn in the Orioles side. Not A-rod, not Jeter, not Bautista, Ortiz.

I was totally against giving Ortiz a retirement gift, because he had been getting dick-high fastballs to hit out for a decade, but I was pretty certain that the O’s would honor him. Everyone in Baltimore knew this was coming, but it was still fantastic.

A+ job by whoever had the bright idea of saving this phone when it happened. Rumor has it Ortiz was NOT happy with the video of him acting like a child and smashing the phone, but finally cracked a smile when Adam Jones trotted out with the phone in his hand. They also showed a video of only only home runs against the Yankees. Pretty creative gift I think. Good job by the O’s for honoring one of the best hitter we will see, and also get one last jab in on him.

PS. The Orioles twitter was on fire during the ceremony. 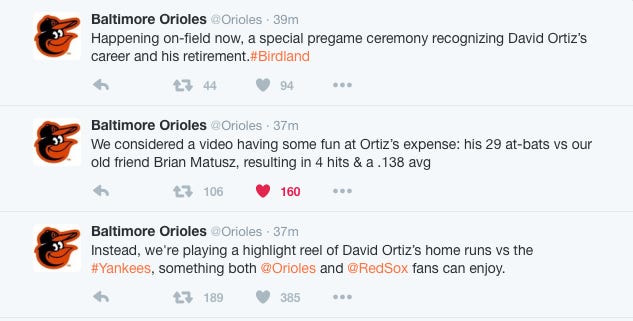