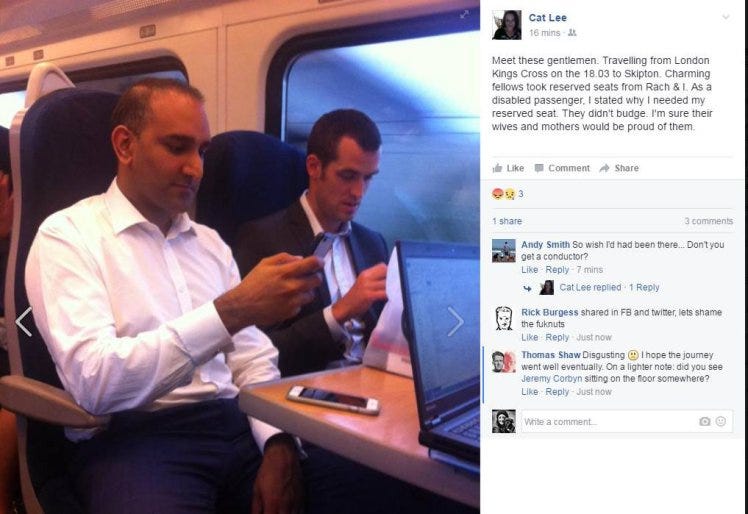 Metro – Cat Lee, from west Yorkshire, was on a Virgin East Coast train from London’s Kings Cross to Skipton service yesterday evening when she spotted the two men sitting in her seat.

The 43-year-old told the men about her disability but the pair allegedly refused and ignored her.

However one of the men in the picture last night claimed that Mrs Lee said she could not stand because she suffered from groin pain but did not claim to be disabled or appear distressed.

The man said there had been an announcement on the train stating seat reservations were no longer valid – meaning the passengers were under no obligation to give up their seats.

God I hate the idea of Facebook shaming people for this because I’m one of those people who genuinely doesn’t even pay attention to others on a subway (and also one time in high school I got up for a lady I thought was pregnant who turned out to just be fat, really haunts me to this day). But if the lady claims to be disabled, you probably need to play it safe and get up. Just because she doesn’t look “disabled enough” or because the train made an announcement about seats not being reserved won’t spare you from the ire of the internet no matter how right you may have been in the moment. You look at those smug faces staring into their phones ignoring this poor woman and her chronic groin pain and there’s no way you’re taking their side. You’ve got this Indian dude flaunting his two phones and disdain for the disabled equally, receding hairline dude looking like he’s having a blast about to chow down on some food and think about all the times he’s kicked a cane out from underneath a sick child…they’re perfect internet hate foil and they don’t even realize it.

At the same time, if you’re ignoring a disabled lady’s pleas for a seat, I’d say some chick ambling up and mentioning something about “groin pains” would be the time. I don’t know much about picking up hobo hookers riding the rails but I have to imagine some lady sauntering over complaining about groin pains while trying to lure you out of your seat has a decent chance of being the way that goes down. Some old timey prospector type-looking lady saying “I reckon I’ve got a pain in my groin, if only there were a big strong needle to ease the throbbins.” Maybe Two Phones here is just loyal to his wife and not buying what she’s putting down. ….someone has to play Devil’s advocate for these dudes before the internet mob hunts them down.