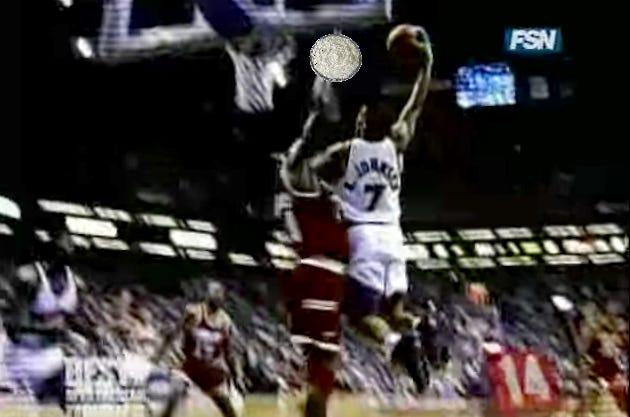 East Bay Express- Multiple sources have confirmed that Sacramento Mayor, former NBA star, and UC Berkeley standout Kevin Johnson was hit in the face with a pie tonight at a farm-to-table dinner event — then he tackled and assaulted the protester in a “bloody” brawl. Sources in attendance have told the Express that, during the meal, a protester ran at the mayor and threw a store-bought pie in his face. A different witness said that the pie had whipped cream as a topping.

After this, the protester reportedly said something to Johnson. This prompted the mayor to allegedly tackle the protester and punch him in the face “repeatedly,” more than half a dozen times, landing “five to 10″ blows. One witness described it as a “bloody pulp.” Other witnesses say that the pie-thrower was hit multiple times in the face and will definitely need stitches, and that there was visible blood.

Sacramento Police released a statement that 32-year-old Sean Thompson was arrested for felony assault of a public official. A spokesman with the Sacramento Police Department confirmed that there was “some sort of physical altercation” between the suspect and the mayor, which occurred after Johnson was “assaulted” with the pie at around 6:45 p.m. He did not know whether the pie hit the the mayor’s face or head.

Listen, there are not a lot of situations where beating someone to a bloody pulp is an acceptable response. But if you have the gaul to (reportedly) hit someone in the face with a whipped cream pie, you have to be ready for whatever pain is coming your way. A whipped cream pie to the face is the most disrespectful move this side of pantsing someone and then table topping them. If you smash a pie in someone’s face in anger, you are pretty much saying that the person you pied doesn’t deserve to live in a civilized world. And even though this guy had the snot beat out of him, he should still be sent to the Pie Pod if he is found guilty of pie throwing.

Then again, if you go to a farm-to-table dinner event in California, you have to know that the place is likely going to be crawling with weirdos that probably protest a ton of shit. You almost have to expect that someone is going to throw a shoe or fake blood at you if you were even a little bit disliked by the general public. So this is as much on KJ as it is on the pie thrower.