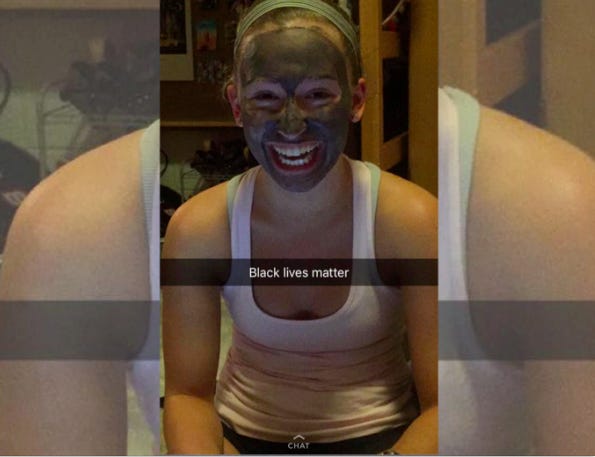 Quinnipiac – A Quinnipiac University student uploaded a racially insensitive Snapchat of her roommate using an exfoliating cream with the caption, “Black lives matter.”

The photo, which went viral on social media, has drawn widespread frustration across campus.

Quinnipiac’s Office of Student Affairs and Public Safety became aware of the incident Monday afternoon and raised the case to a high priority level. The three students involved were identified and interviewed according to Mark Thompson, executive vice president and provost.

“It’s one student who’s responsible, the other two did not know what was taking place,” Thompson said. “I’m confident of that based on the investigation that was undertaken.”

The one student who made the decision to post this picture and add the caption to it will be suspended from housing and will go through the necessary disciplinary process, Thompson added.

Hell yeah, this is getting easy for me. I can just keep copy and pasting this blog template and get back to working on the app and Newsletter. Hold on let me pull it up, don’t have to even look that hard because we get this same exact story basically once every 4-5 days. Ok there it is –

As harsh as [INSERT PUNISHMENT] may be, I won’t be sitting over here crying for [INSERT NAME OF IDIOT]. I mean I’m just a broken record at this point. If you post yourself with [INSERT SEMI OR FULLY RACIST ACTION, MOST COMMON: BLACKFACE, N-WORD] on your fucking [INSERT SOCIAL MEDIA PLATFORM USED], you’re literally too dumb to feel bad for or just be alive in general.

So, not sure what the “disciplinary action” is, but sorry, Quinnipiac girl, I won’t be sitting over here crying for you. If you post yourself with a blackface Black Lives Matter on your fucking Snapchat story you’re literally too dumb to feel bad for or be alive in general.

For the record I definitely don’t think you’re a racist. Just a total idiot.