NJ.com – A video released by New Brunswick Today shows someone handing Hobbs a beer just before he leaves the stage. Hobbs says, “No, I can’t drink that right now. No.”

The video, headlined “Rutgers AD Patrick Hobbs Throws Back a Beer at School-Sponsored Tailgate Party,” cuts off just as he appears to take a sip.

Hobbs said picking up the beer was “a mistake.”

“I regret that any action on my part can be interpreted as promoting the use of alcohol,” he said. “That was certainly not my intention.’

First of all, credit to AD Hobbs. I have never in my life encountered a better spin zone:

Hours after a website released a video that shows him drinking a beer at a student tailgate, Rutgers Athletics Director Pat Hobbs apologized for his actions and told NJ Advance Media he was trying to restore order to what was turning out to be an unruly atmosphere.

“My first concern is always for the safety and well-being of our students,” Hobbs said. “Anyone who was at the (student tailgate) Saturday knows that I was acting to ensure that.”

Got on stage and slammed down a can of beer to keep students safe. Amazing. Second and more importantly, who gives a fuck? Why does a 50 year old man have to apologize for drinking beer at a college tailgate? “Promoting the use of alcohol”? Yeah, because nobody at a college football tailgate thought of drinking until they saw the AD do it.

Pretty obvious that somebody at Rutgers woke up, checked their calendar, remembered what year it was, and remembered that anytime college kids start having too much fun something needs to be shut down. 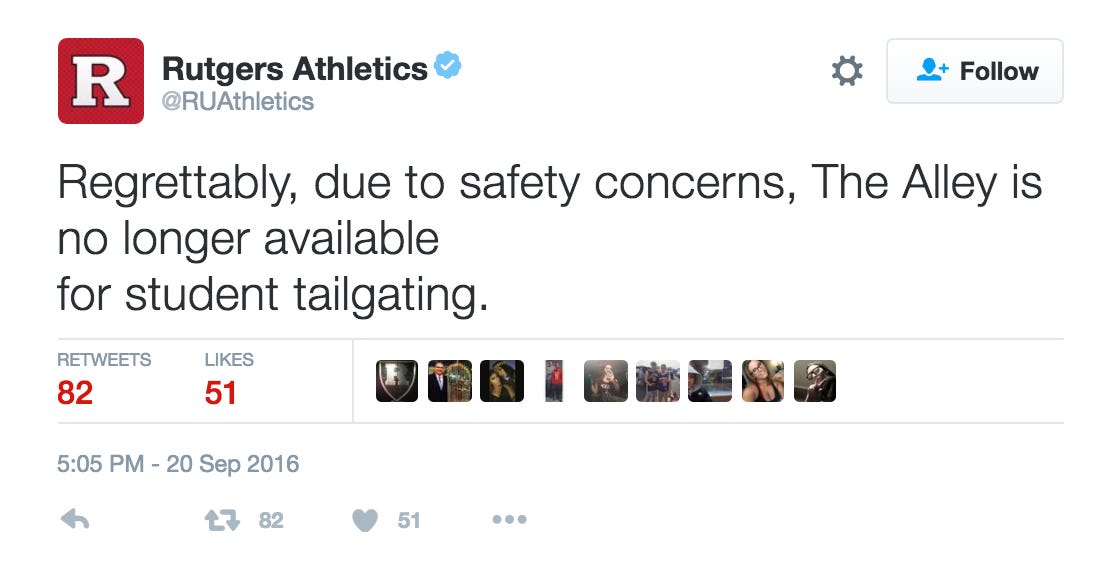 Dubbed “the Alley,” the tailgate was located in a gravel lot across from the Werblin Recreation Center on the Busch Campus, approximately 400 yards from High Point Solutions Stadium.

On Tuesday, the university athletics department announced that it would be shutting down the student tailgate at home games for the remainder of the season, issuing a statement that read: “Regrettably, due to safety concerns, The Alley is no longer available for student tailgating.”

Check out just how unruly and wild it was!

Kenneth Cop, the chief of Rutgers University Police, said the environment was relatively calm and his department ended up issuing two citations apiece to a total of four people in the hours leading up to the 12 p.m. kickoff.

A whole 4 people getting citations?! Is anyone at Rutgers in control??