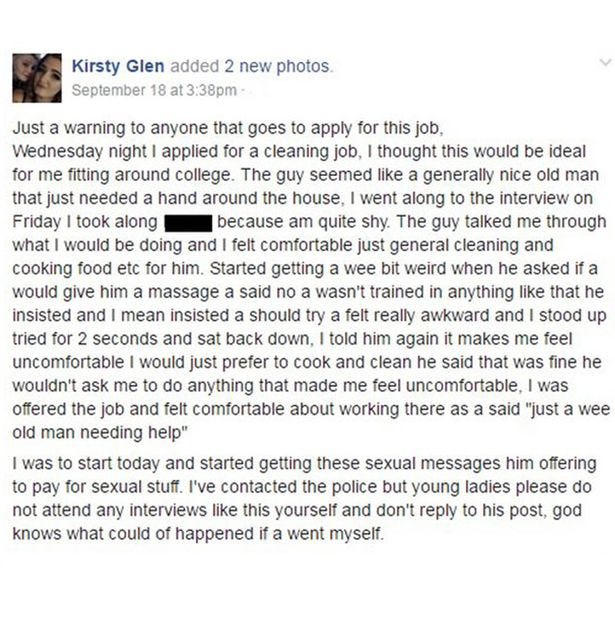 Mirror – A shocked student was bombarded with a string of vile text messages from an old man after accepting a part-time cleaning job from him online.

Kirsty Glen, from Johnstone, Renfrewshire, is warning other women to take care when responding to adverts on Gumtree, and has reported the incident to the police.

She initially accepted the cleaning job at the Giffnock home of a “wee old man” known only as David, the Daily Record reports.

The man behaved impeccably during the first stage of the interview at his home but then requested a massage.

After briefly attempting a massage, she asked if she could stop, and the man obliged, saying he would not make her do anything that made her uncomfortable. 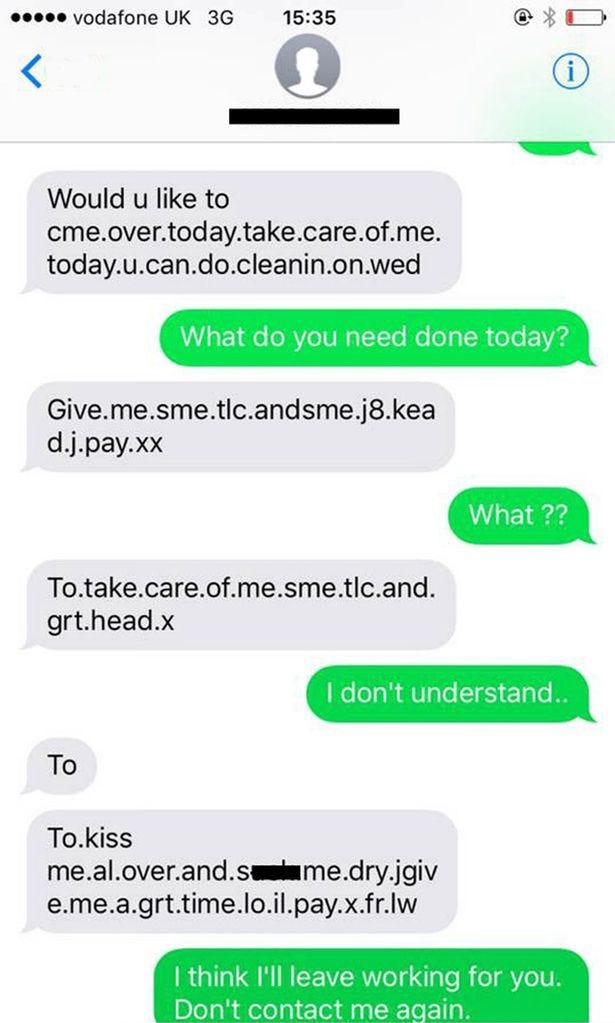 Okay so I know British texts get weird and they love throwing x’s and random periods into things…but these texts can’t be just “I’m an old British dude who doesn’t text well” can they? To me reading these, this is full on creepy old dude worked up into a froth, jerking with his right hand while texting this poor chick requests with his left hand. Just riddled with typos and shortened words and gibberish but definitely with enough things like “grt.head” and “tlc” and “suckme.dry” (also a great name for a porn site’s vanity URL) sprinkled in so she gets the idea about what’s going on there, no massage-based ambiguity this time. I’m not even sure he wanted her to accept the terms as much as he wanted to bury her in his own filth to turn himself on, like when Chatroulette got ruined by random Arab dudes pretty much forcing people to watch them jerk off. Everything about it screams “big time experienced creep who’s going to get his money’s worth regardless of her answer” moves to me.

Plus this guy clearly hasn’t watched enough maid porn to get how it works. First you offer extra money to get her top off, then you offer extra money to get the bottoms off, then you happen to be sitting there with your engorged penis out and she’s like “Well I guess I might as well for an extra couple hundred, we’re already here.” Sometimes she even seems to perk up for this part from what I can tell. Can’t say I’ve ever tried it with a cleaning lady but with thousands of hours of brave men documenting this process strewn across thousands of websites across the internet, it seems like he should know better. Do your research before insulting innocent professional women with offers of money for sexual favors, that’s all they ask really.