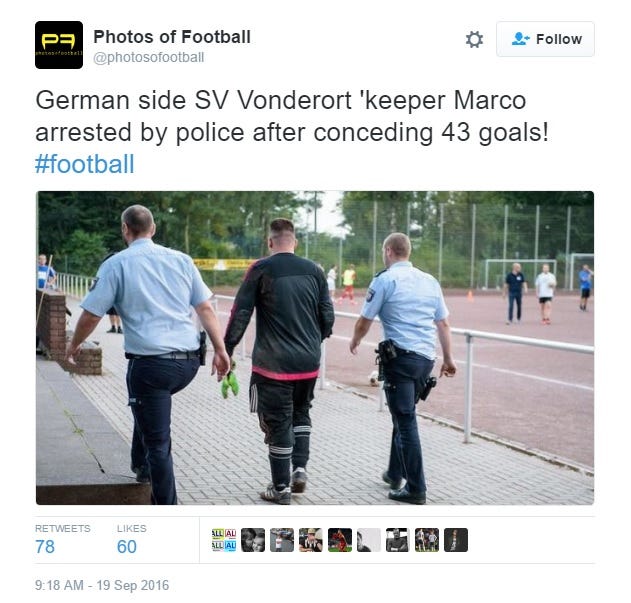 Yahoo – Sometimes, a performance on the field is so bad that it’s criminal. That may quite literally be the case for a goalkeeper in the lower leagues of Germany.

In a recent league game, SV Vonderort broke an undesirable record when it lost 43-0 to rival PSV Oberhausen. According to German newspaper Express, SV Vonderort was down 35-0 at halftime … PSV Oberhausen was so embarrassed by its lead that it made the sporting gesture of removing three of its own players to even up the numbers…

…two police cars arrived at Vonderort’s training ground in Bottrop (around 30 miles west of Dortmund). The 25-year-old keeper was escorted from the training field by armed officers and brought to the local police station for questioning.

You know what? Good. I mean I don’t want to go around saying that goalies–in any sports–are a sub human species. That would be mean. But they are. Soccer, hockey, lacrosse, you name it. If your sole job as an athlete is to get hit with shots, then you are a lunatic for voluntarily choosing to play that position. Never once in my life have I met a goalie without at least a screw or two loose in their head. So if they’re already pretty crazy to begin with AND THEN they go out and let in 43 goals in a game? Well let’s at least bring this guy into the station to question him a little bit because something just ain’t right.

Now if this has anything to do with gambling and point shaving, I say we cut him loose. How many people do you think actually gamble on this random ass league in Germany anyway? It’s not like they tried to rig the Super Bowl by turning off the power to the Stadium during the middle of the game or anything like that. It’s just some idiot playing glorified men’s league giving up a goal every other minute in a silly footy match. But if there were no ulterior motives? No outside third-party forces leading this bum to give up 43 goals in a game? Well then by all means lock him up and throw away the keys. I’ve been scorned by far too many goalies in my life to feel any remorse for sending one away for life. You’ll only be doing the rest of his team a favor.

All I can say is I guess this goalie has traded in being between the pipes, to being behind the bars.