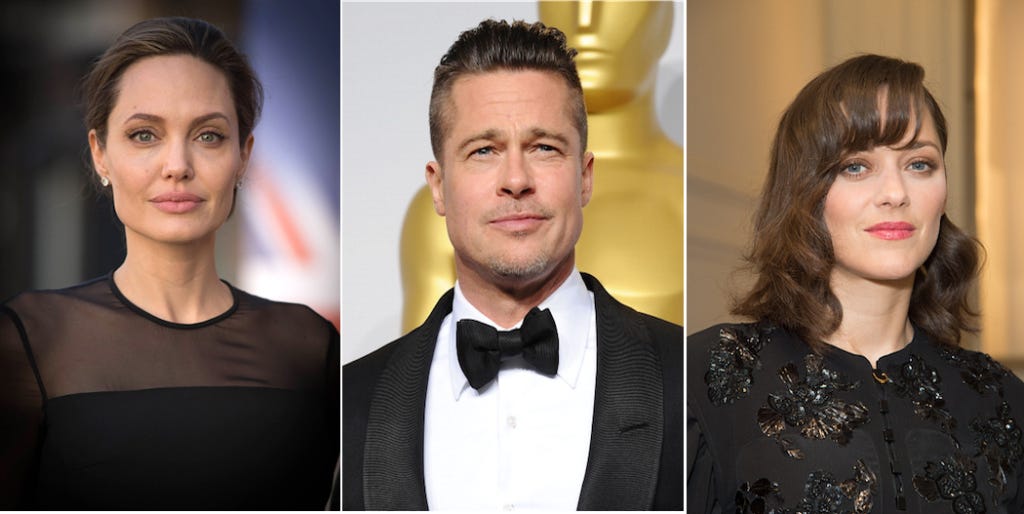 Page Six - Angelina Jolie has filed for divorce from Brad Pittafter learning he was cheating on her with his sexy co-star — and Russian hookers, a well-placed source told The Post on Tuesday. “He’s in the throes of some insane midlife crisis, and Angie is fed up,’’ the source said. “She hired a private eye because she felt that he was fooling around with her on the set, and it turns out, he was. And that was the final straw.” Pitt, 52, had been rumored to have been cozying up to his “Allied’’ co-star Marion Cotillard, 40, for months during the pair’s filming of the World War II drama in London. The PI discovered not only that was Pitt cheating on his wife of two years with Cotillard but also with Russian hookers while boozing it up with co-workers, the source said. Jolie, 41, also was sick and tired of sparring over their lifestyle, another source said. She has increasingly wanted to quit Hollywood in favor of devoting herself full-time to traveling the globe for her humanitarian work, while Pitt prefers Tinseltown and its parties, the source said.

Hold up hold up hold up. Angelina Jolie…dumping someone…for having sex with their co-star on set??? If you listen real closely you can hear Jennifer Aniston smashing everything in her house screaming “Are you fucking kidding me??!?!” Angelina Jolie straight up ruined lives by fucking the shit out of Brad Pitt on the set of Mr. and Mrs. Smith. She didnt seem to have any problem with banging a married actor when she was getting that Tyler Durden dick. Now all the sudden she’s old and has a thousand kids and looks like a ghoul and she’s up in arms?? Thats not how this works, toots. You reap what you sow, you crazy Brother Kissing, Billy Bob Fucking, Vile of Blood Necklace Wearing hypocrite.

Now, the Russian Hookers? Thats a horse of a different color. I suppose you might have a gripe there. But get outta here with being shocked and appalled that Brad Pitt fucks chicks that he makes movies with. You created that monster, babe.

PS – Brad…you’re Brad Pitt dude. You can do better than the chick from Inception and Batman. Nothing wrong with it but lets make sure thats just a warm up round before you go all out now that you’re single. I’m expecting more from you.