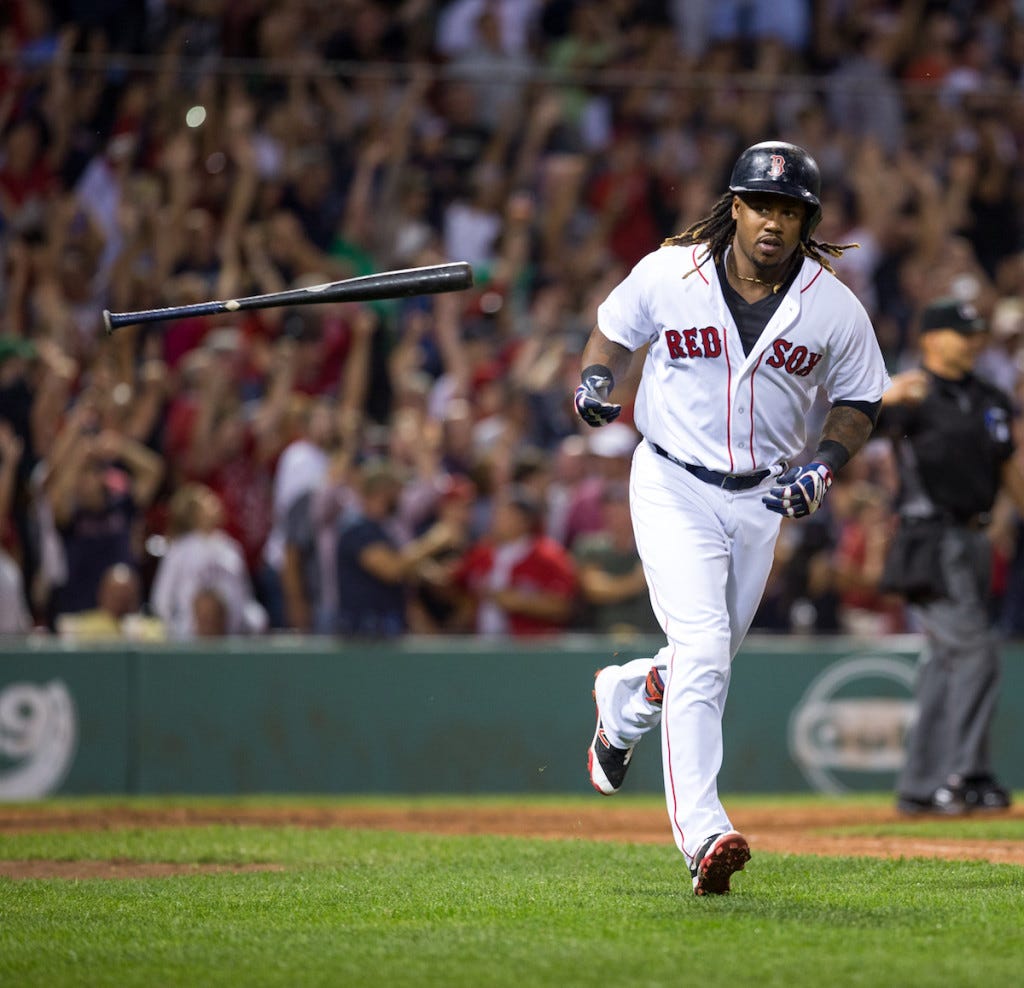 Hey, how was your weekend? Cool, don’t care. Hanley Ramirez’s was way better.

The New York Yankees came to Fenway Park on Thursday for a four-game series with a chance to be tied for first place in the AL East with the Boston Red Sox if they could pull off a four-game sweep. Don’t laugh — it’s happened before. In 1978, the Yankees came to Boston on a Thursday in September, four games back of the first place Red Sox. They went on to beat the Red Sox in all four games, outscoring them 42-11 in their house. It was infamously dubbed the Boston Massacre.

This past weekend was the Hanley Massacre. In the four-game series, Hanley hit .563 with a 1.963 OPS, 4 home runs, a double and 9 RBI. Of those four home runs, one of them was a walk-off homer, one of them gave the Red Sox the lead in the bottom of the seventh, which ended up being the game-winner, and another was a three-run bomb to bring the Red Sox within a run. Two of those home runs that I just described came on Sunday night in the series finale.

The Red Sox fell behind 4-0 in the top of the fourth inning after Drew Pomeranz gave up a cock rocket to Gary Sanchez, and three other runs scored on a dinky single and a couple ground outs. Still, not a great sign that Pomeranz is putting all these base runners on, allowing seven hits and two walks in 3.2 innings. There’s a battle going on for who would get the ball in a potential Game 3 of a playoff series, and apparently Pomeranz doesn’t want it. In the month of September, Clay Buchholz and Pomeranz have combined for a 6.67 ERA, while Eduardo Rodriguez has a solid 3.31 ERA. On Friday night, I talked about how I’d pick Rodriguez for a Game 3 starter. Something to keep an eye on, though — Pomeranz has made six starts at Fenway Park and has an ERA of 6.75, while averaging 4.1 innings per start, but on the road, during his Red Sox tenure, it’s 3.53 and he’s averaging 6 innings per start, so perhaps those splits might play a factor come postseason time.

There’s no statistic to go with this one — it’s more of just a feel — but when the Red Sox fell behind the Yankees 4-0 in the fourth inning, I had the utmost confidence that this game was far from over. That’s a really good feeling to be in a position where you know that your team is playing such good baseball right now that climbing out of a four-run hole is no big deal for this team. In fact, the Yankees led by at least three runs in three of the four games in this series. The Red Sox won all of them. The comeback in the series finale began when Hanley Ramirez tagged a three-run shot to make it 4-3 in the bottom of the fifth.

The next inning, Jackie Bradley Jr. ripped a game-tying base hit into right field to tie it, which set the stage for Hanley yet again in the bottom of the seventh to hit a moonshot onto Lansdowne Street, giving the Red Sox a lead that they would not give up. On June 14, Hanley promised the hot streak that he’s currently on by saying, “It’s going to be dangerous. It’s going to be homers, triples, and more homers. It’s going to get ugly.” Since June 22, Hanley’s hitting .323 with a 1.053 OPS, which is third best in the majors over a nice 69-game span. His .657 slugging percentage is second to only Brian Dozier (.698), who has put up video game-type numbers in the second half.

After completing the four-game sweep of the Yankees, the Red Sox are now 11-5 in the month of September, which is tied for the best record in the majors this month. Their divisional rivals, the Toronto Blue Jays, are 5-11, which is the worst record in the majors this month. All the credit in the world to the Baltimore Orioles, who’ve stuck it out until the very end, which I didn’t think they would. I just didn’t think they had the rotation to hang in there, and when Chris Tillman went on the disabled list, I thought that was it for them, but they’ve somehow managed to stick around. They’re 10-6 this month, and they’ve got a HUGE four-game series in Baltimore against the Red Sox, which starts tonight in a matchup between Rick Porcello and Dylan Bundy.