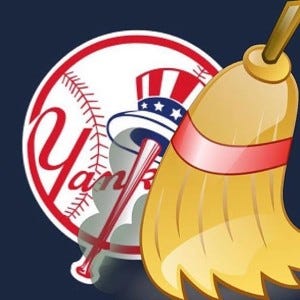 For those who thought Joe Girardi could not have had a worse performance as manager this series, he saved his worst night for the series finale.

The Red Sox finished off their four-game sweep, their Yankees massacre, with a thunderous 5-4 win at Fenway Park on Sunday night with Hanley Ramirez once again doing the damage.

Ramirez blasted a two-out, three-run home run off CC Sabathia in the fifth to get the Red Sox within one after the Yankees opened up a 4-0 lead. Then with the game tied at 4-4, Ramirez crushed another long home run over the Green Monster in the seventh off reliever Tyler Clippard to lift the Red Sox to victory and the four-game sweep.

In all, Ramirez blasted four home runs and drove in nine runs in the series.

There is really no way to dress this weekend up and make it look presentable. The Yankees should have won 3-4 and still be very much in the playoff hunt. Instead they blew three leads and lost key players for the last 2 weeks of the season and now sit 4 games out of a Wild Card spot. Girardi made a ton of bad decisions that cost us games because he buys too much into analytics and has eliminated any of his experience from decision making. Everyone and their mother knew that Hanley was going deep in those at-bats last night. Well everyone except the guy who was making the decisions.

Getting out-played is fine for right now. Our team has gotten significantly younger over the last few weeks and these guys are expected to play like rookies. We’ve been lucky enough to have guys that have contributed right away and a resurgence of some veterans, but the manager shouldn’t be the weak link. Girardi continues to rely on his binder and phrases like “I trust…” which is fine in April and May when you’re trying to build confidence, but in September you pitch around the guys who has been murdering you all weekend.

Technically the Yankees aren’t eliminated from the playoffs yet. They could go on a win streak and find a way to sneak in but that isn’t likely. Over the last week though, Detroit, Seattle and Houston have all jumped in the standings and we play exactly zero games against those teams for the remainder of the season. Even with our divisional games that are left on the schedule, it may be too little too late. I would love to see it happen but with guys like Ellsbury and Castro questionable for the rest of the season and Judge done for 2016, none of it seems likely.

Even if Ellsbury can return on Tuesday, he will need time off to finish the season. His contract is one of the worst in baseball but over the last 30 games he has found some power and delivered clutch hits to drive in runs. Moving him is unlikely so keep him healthy to start next season is important. The same could be said for Starlin Castro and his hamstring injury.

The Yankees are saying they hope he can return for the last week of the season, but if he is not 100%, it’s not worth it. Castro has had a career year in terms of power and rebounded nicely after struggling for much of the middle of the season. To risk him getting injured and disrupting his off-season training would be a huge mistake. Technically we’re still in rebuild mode next year but by June Clint Frazier should be called up and we will have a good look at our future. That future includes Castro and Didi up the middle so pushing Starlin to play in meaningless games makes zero sense. Let’s just hope the binder agrees.