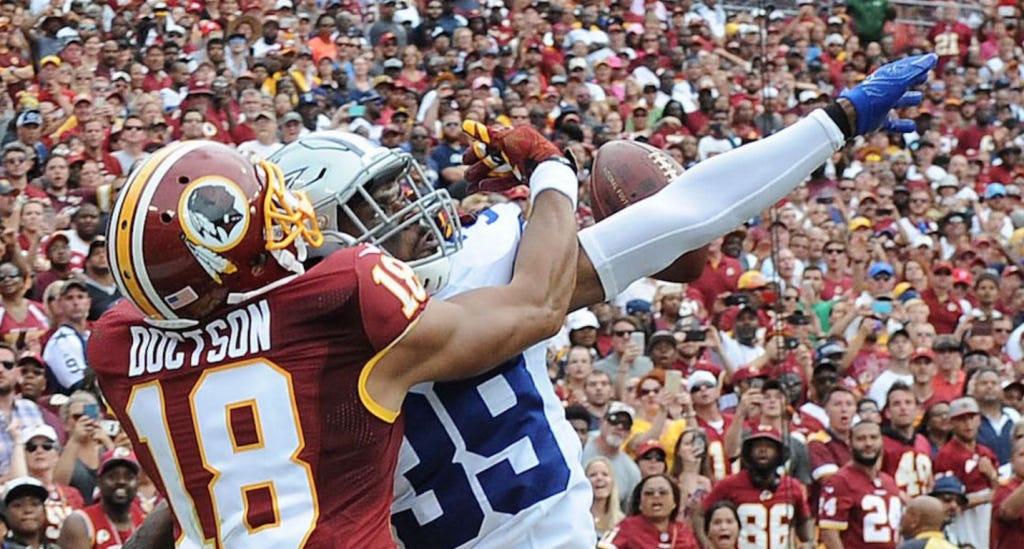 Yesterday stunk on ice. Kirk wasn’t sharp, Breeland wasn’t sharp, the defense allowed I think 400 3rd down conversions, and the Skins still had a chance to win it at the end. My biggest criticism, however, doesn’t fall on Kirk, it falls on Jay Gruden. We have Jordan Reed. Vernon Davis. DeSean. Matt Jones who was running well. Crowder who is good at getting open in the slot. Garcon who catches balls in tight spaces. And they kept throwing fades to Doctson, a WR who Kirk barely has had any time working with due to injuries. Gruden defended it:

WaPo - Well before Sunday’s loss to the Cowboys ended, critics were hammering the Redskins for repeatedly calling (unsuccessful) fade routes to rookie Josh Doctson or Jordan Reed when they approached the end zone. After the game, Sonny Jurgensen put the criticism directly to Coach Jay Gruden.

“Coach, why do people fall in love with the short fade down at the goal line?” Jurgensen asked Gruden during the Redskins Radio Network postgame show. “We tried it three times!”

“Yeah, we tried it three times, and we’ll try it again three times next week if we have to,” Gruden replied, without smiling. “Just, we have very good matchups there, and if you have a running play called and they’ve got nine or 10 people in the box, it’s tough to get a yard sometimes. So we’ll figure out ways to get a yard running the ball down there, but we will continue to work our matchups one-on-one if need be.”

On defensive side of the ball, RJ Francois was none too please with the play calling. And rightfully so.

Those are some fightin’ words from RJF. Deliberately calling out the defensive scheme for not making proper adjustments during the game is not where we wanted to be after week 2.

And now for the man of the hour, Kirk Cousins. After putting together a beautiful string of 7 games last season, Kirk looked to be the QB of the future. In the offseason, however, Scot did not sign him to an extension, instead making him sign the franchise tag and play for a new contract this season. And so far, not so good for Kirk. Even some of his good throws, like the bomb to Doctson, were underthrown. He also overthrew open receivers, including a bomb to DJax where he was wide open. The pic he threw in the end zone was inexcusable.

But look- I’m not ready to right off Kirk quite yet. Why? Because being an NFL QB is impossible. Kirk also made some really nice throws yesterday. He is clearly a starter in this league. The problem is Skins fans after last season want him to be Tom Brady or Aaron Rodgers, and that’s setting way, wayyyyy too high of expectations. He wasn’t perfect last season, and he won’t be perfect this season. But the alternative is what? The reason Brock Osweiler gets a elephant sized contract after playing a few games is because it’s so hard to find a QB. Jay Cutler is still starting for the Bears because it’s impossible to find a QB. Kirk was far from perfect yesterday, but holy shit we’ve seen so much worse. Some Skins fans are reacting like we’re watching John Beck again. I think we all need to calm down and let it play out. I’m not ready to put his head on the chopping block after week 2.

Being 0-2 stinks. The schedule is hard. The defense isn’t great. We could very well have a long, disappointing season ahead of us. But I’m not in full out panic mode quite yet.

PS: Josh Norman played good week 1, and played GREAT yesterday. Guy is the real deal. I can’t imagine our defense without him, gollyyyyyyyyyy. Also, shout out to Trent Murphy for getting to the QB twice yesterday. Hopefully that becomes a trend.