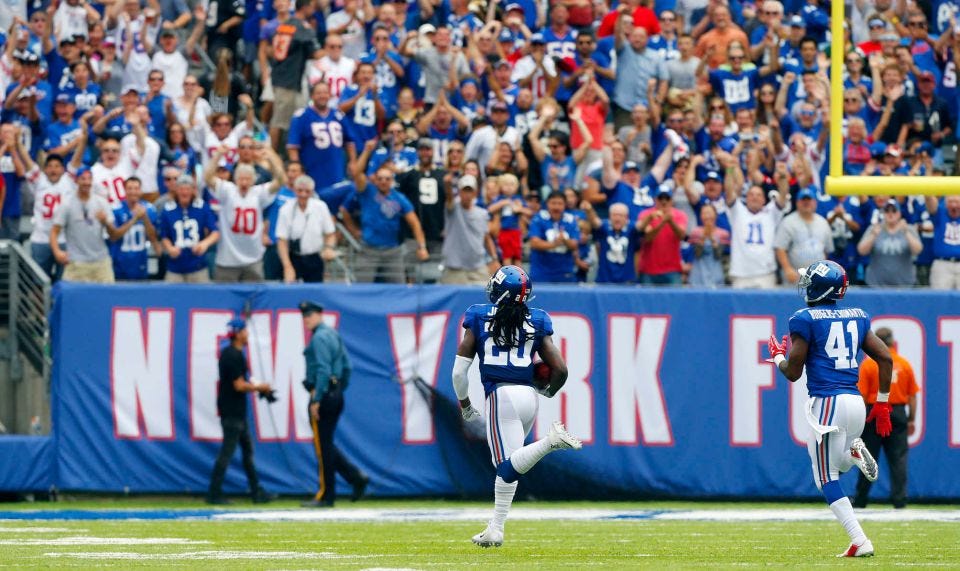 Similar to last week’s opener in Dallas, today’s MetLife battle with the Saints brought back some 2015 memories. Turnovers, goal line inefficiency, poor OL play (I’m looking at you Marshall Newhouse) and some untimely drops kept New Orleans in striking distance. The Giants defense stood tall though. Despite a trio of first-half fumbles, a monster FG block by Big Hank and TD return from Janoris Jenkins (who was outstanding again) gave NY a 7-0 lead before a late FG cut it to 4 at the half. Brees finally broke through to knot the game at 10 early in the 4th, but the G-Men won the FG exchange with no time left for the W.

The defensive line still hasn’t peaked, but they certainly brought more pressure than last week while making Mark Ingram a non-factor just like they did Ezekiel Elliot a week ago. Jenkins was a stud again & rookie Eli Apple made some plays too. As a unit, they thwarted 10 of 13 third down plays against which was an absolute must considering the lack of offensive support Eli & Co. provided.

The opportunities were there – but if the Giants weren’t giving the ball away they were dropping easy scores or running shotgun draws at the 1 right up their own assholes. They were so bad in two goal-line opportunities that I couldn’t tell whether Eli was taking a knee at the end of the game or they were still running their offense. I will say this though – Sterling Shepard is a certified stud. Kid ran immaculate routes today and has magnets for palms. The rook hauled in all 8 targets for his first 100-yard game. There was no bigger catch though than Victor Cruz atoning for his first-half fumble by literally taking the ball (and the game) out of the Saints’ hands on 3rd & 8 with under 2 left after a bad drop from ODB.

Cruz has played well enough these first two games of his comeback to be sprinkling just the right amount of magic on this Big Blue season. Still a long slate of games left, I know – but I’m just saying. #80 has essentially had back-to-back game-winning catches & has contributed way more than most fans expected. With Shepard & Beckham, Eli’s got just as many weapons as anyone else.

Bottom line – the Giants are winning without their best effort & good teams get better as the season gets older. The biggest difference though in comparison to recent history is no longer being absolutely terrified when their defense is on the field late. They’re gonna score plenty of points, but today proved they don’t always HAVE TO anymore. Spags’ crew can keep offenses run by the likes of Drew Brees at bay. Now Kirk Cousins & the winless Skins are next to take a crack? Can’t wait.