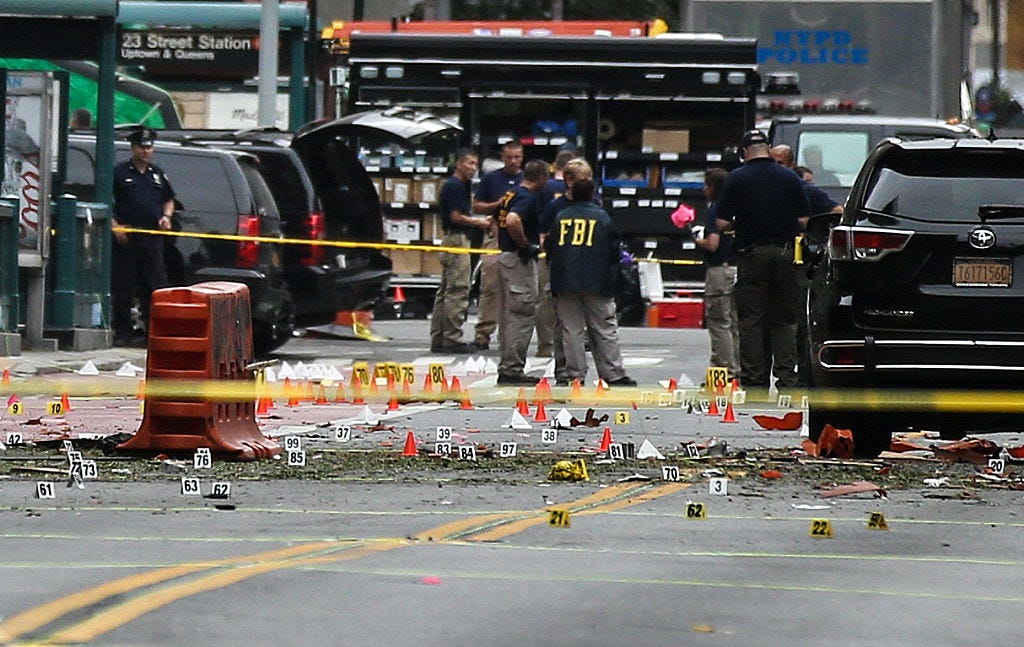 Video shows the aftermath of #Manhattan explosion, which has left at least 25 injured https://t.co/lwFl96s62K pic.twitter.com/yzA3v45Qe4

NYC explosion, what we know:
-At least 25 injured.
-Injuries are not life-threateninghttps://t.co/YIqa8Ps9xx https://t.co/d1RBop95k7

A second device was found nearby.

The latest information on the explosion in the Chelsea neighborhood of Manhattan https://t.co/MtqRtER3fz pic.twitter.com/1d5xR2vQkI

Mayor de Blasio calling it an intentional act and a bombing but not terrorism. Hmmm.

When de Blasio says Chelsea was "an intentional act" but maybe not terrorism, what precisely is the basis for the distinction?

Some anonymous dude called 911 and made threats.

"I'm looking at the explosion down the block. There will be more,'' an unidentified male said. https://t.co/TQ4ndfNKPU

There was also a pipe bomb explosion in a trashcan in Jersey and a mass-stabbing at a Minnesota mall. Authorities now saying the two bombings were likely done by the same person*. None were injured in Jersey. 29 were injured in NYC (none life-threatening). 8 were stabbed in Minnesota (none life-threatening) before an off duty cop shot and killed the terrorist. ISIS channels have claimed him as one of theirs.

*originally claimed no connection, which I wrote in original blog.

A news agency linked to ISIS claims that a "soldier of the Islamic State" was behind an attack at a Minnesota mall https://t.co/SKAZ0Pttdd

“The police said that the attacker had mentioned Allah and asked at least one victim if he was Muslim. All eight victims were expected to survive.” (via NY Times)

I know it’s Sunday and Sunday is for recovering, hanging, and watching football because we’re American and that’s what free American people do. But crucial to remember: still bad people out there trying to do bad things.

Also some real good people who had some real shitty Saturdays. We should all be aware of and thinking about them — good people are awesome, terrorists suck.