Fans have been calling for Brian Van Gorder’s head for awhile now, and maybe Brian Kelly is listening if you believe twitter likes. 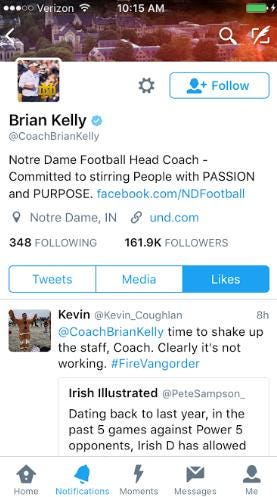 #FireVanGorder got one of Coach Kelly’s all-time 75 likes. Nbd. Kelly has since unliked the tweet. Now, I don’t want to read too much into a tweet, but at the same time I think Van Gorder and his stupid goatee are as good as gone. The defense has regressed and it’s keeping the Irish from being a top team.

It’s a very young team, especially in the secondary, but there’s no excuse for a team with this much talent and resources to have one of the worst statistical defenses in the country.