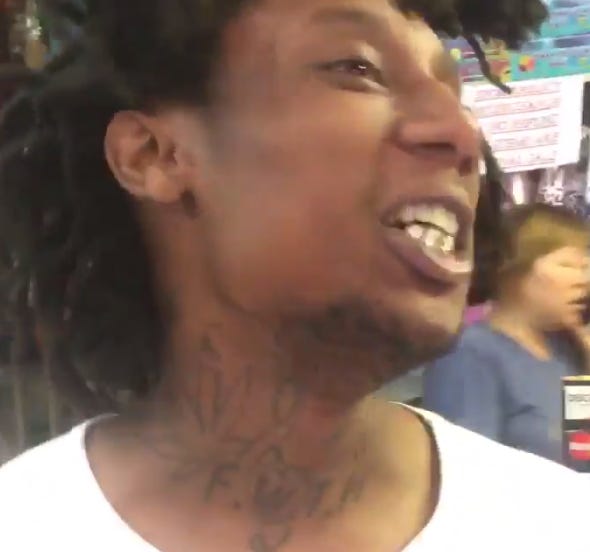 It’s Intern interview time at the office, but it’s also Aloha Day declared by the PMT Crew. Apparently Riggs and I missed the memo looking from the outside in of Club Cool. To each their own. So we ventured out to attempt to locate some Hawaiian gear in attempt to mingle with the cool kids, but instead ran into this rapper/marijuana man Quaffa(?).

So we dabbled in some edible dank to get good favors in the office. How could we not with those credentials tattooed on his neck? I had an experience and a half last week at Springsteen, so I tossed over the treats to Hank to see if the cookies were A) Indeed edibles and/or B) Would kill him. Big Cat and I (and an interviewing Intern for some reason) had a half of one, but Hank obliged and housed said baked goods.

Now, Quaffa said it would take 15-20 min to kick in, which is red flag #1-1,000,000 when talking about edibles. I’m no Dr. Dank, but if these things were legit we would have to wait at least an hour before we start traveling through time. So we played the waiting game. I full expected Hank not to feel his face. Here are the results.

Disappointed to say the least. Granted, I don’t think I could tell high Hank from his regular form. I said it before and I’ll say it again, that kid thinks like Floyd Maywether reads. But still, it seems as if we were fleeced. I’ll update if/when Hank or anyone of us starts seeing through time or (most likely) convulsing, but for now this is what we got.

Now back to that Hawaiian sun.