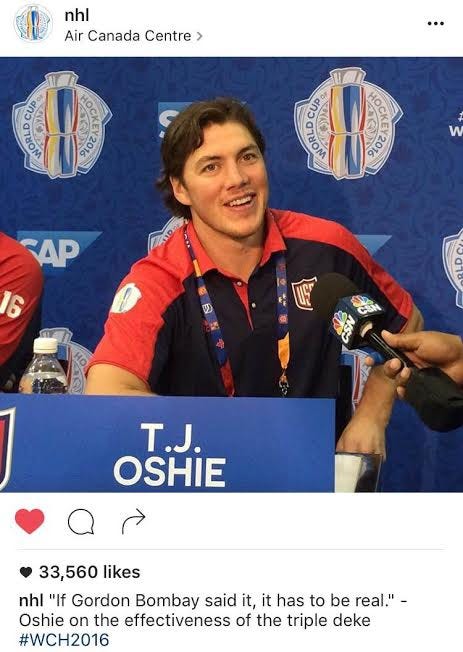 Is it unfortunate that TJ Oshie has been sent to the Caps where he’ll never make it out of the 2nd round and I am forced to hate him as a Flyers fan? Yes. Extremely. Especially because I don’t want to have to hate his smokebomb wife. But for two weeks starting tomorrow, TJ Oshie isn’t a Cap. He is a player on Team Greatest Nation for the World Cup of Hockey. So I’m willing to put some differences aside here as fellow Americans and fellow subscribers to the Gordon Bombay School of Life.

Now the World Cup will be using NHL rules so we won’t get to see TJ Oshie put on a clinic against Russia again in the shootout even if the opportunity presents itself.  What I will say is this, however. Even though Oshie was more clutch in his shootout against Russia than Bombay was in his penalty shot for the Hawks in the Minnesota pee-wee state championship, I’m gonna need TJ Oshie to be a little more like Bombay this go around than he was at the Olympics. Because let’s be honest. Bombay beating Team Iceland for gold at the Junior Goodwill Games will always be more memorable than Team USA not even medaling at the 2014 Sochi Games. What Bombay proved is that if you want to be remembered in this country, you have to win something. Hopefully Team USA is watching D2 on repeat from now until puck drop to get motivated for greatness.

P.S. – remember when Chief tried to drag Gordon Bombay’s good name through the mud? What a fucking idiot. Did he drink a little too much and maybe bang one of his player’s mom? Sure. But who hasn’t? The man won at seemingly every level. He’s the Minnesota Miracle Man and I’ll go to war with anybody who doesn’t think so. Now let’s bring back the Bombay defense blog.

So Chief just wrote a post bashing Gordon Bombay basically saying that just because he liked to slug a few beers and bang a few chicks, that makes him a bad coach. You can read that blasphemous post here.Well as the resident Mighty Ducks expert, I’m here to say that Chief doesn’t know a damn thing about Gordon Bombay and that he couldn’t be more wrong about the whole situation. So I guess what makes the most sense here is to just break this whole thing down point-by-point to show how absurd it is for anyone to ever question the greatness that was The Minnesota Miracle Man. But first, I just want to say a few words on Adam Banks.

It’s true that Bombay was a little shiesty when it came to picking up Banksy. But think about how everything would end up if Banks remained a Hawk like the rest of his family; The Cake Eater was no doubt one of the most talented players to ever grace the ice. But the Hawks, led by that shitbag Coach Reilly, were the worst possible fit for the kid. If Banks continued playing for that dickwad, he would have gone down the same path as Bombay. He probably gets a few more years with Coach Reilly. Moves on to play Juniors and then what? He gets to Juniors and realizes there’s an entire team filled with kids that are pretty much just as talented as he is and all of a sudden, he’s not such a stud anymore because he never learned how to fly. Without Bombay, Banks is just another Evander Kane (up until today). Stuck in the same place for too long and never had a chance to grow as a player. Reilly only taught the kids how to play as individuals. Gordon taught the kids how to play as a team because Ducks Fly Together. Basically, Reilly was turning the kid into a good-for-nothing Russian, while Bombay knocked some North American sense into the kid.

Now on to some other quick points.

– Sure, Bombay hit a little rough patch in his life. He quit playing hockey, became not even a has-been but a never-was, was a scumbag lawyer and got in a little trouble for a DUI. But this right here just goes to show you that everything in life happens for a reason. As far as the beginning of his coaching tenure is concerned, you can’t expect the guy to become John Wooden right from the get-go. He still was a dickhead lawyer at heart while he was teaching D5 to “take the fall, act hurt hurt, get indignant”. But can we really judge a man on his first few weeks on the job? Fuck no.

– The Oreo Line of Guy Germaine and Jesse and Terry Hall is one of the funniest names of all time. Is it racist? Yeah, maybe. But if you can’t laugh at that, you’re a wet blanket. It’s all in good fun and I’m sure the Halls both realized that.

– On the points of Bombay fucking Charlie’s mom and fucking the chick from Iceland, of course Bombay was going to sling his meat around like it was going out of style. The dude was the hottest coach to role through Minnesota since Bud Grant. Nothing gets the ladies dripping wet quite like a PeeWee hockey coach. You gotta strike while the iron’s hot. Plus, if he wasn’t piping out Charlie’s mom, he’d have so much pent up aggression and take it out on the kids. In a sense, Charlie’s mom’s snatch is the only reason why the Ducks were able to become state champions.

– Bombay throwing the USA jerseys in the trash in between the 2nd and 3rd periods of the Gold Medal game in D2 was pretty messed up. I’ll concede the point to Chief on that one. But keep in mind that this decision secured the Gold Medal for Team USA and in my mind, Gold is the only thing that matters in life.

– One of the best things Coach Bombay ever did was allow the team to move on without him after D2. There were times when Bombay get a little full of himself i.e. the beginning of the first movie and halfway through D2 when he was yucking it up with Chelios, Robitaille, and Kariya. But realizing he needed to pass the team along to Coach Orion to get the best of them in D3 was very unselfish and very commendable.

– As for putting Goldberg in the net during the Gold Medal game over Julie The Cat… Ummm I guess Chief missed out on the way that game ended? Because he put Julie The Cat in there for the biggest moment of all of their lives. If Julie The Cat plays that whole game, her confidence is rattled by the end because you know she’s at least giving up 3 or 4 goals. But keeping her fresh to face Gunnar Stahl was genius.

– Results. At the end of the day, it all comes down to what did Bombay accomplish. He has a Minnesota State Championship under his belt which is something that only a select few coaches can say. He won the Gold Medal at the Junior Goodwill Games. And who gives a flying fuck about what the competition was like? Are you really gonna complain about America being the best team in any international competition? Didn’t think so. And then you have to imagine that Banks would have moved on to the NHL and became a stud. Germaine definitely went to the NHL as well and served as a great 2nd line center for a few seasons before the injury bug caught up to him. Portman could have also been in the league for a couple years as a goon (he had way more upside than Fulton). And finally, he brought an entire group of misfits together and taught them all how to fly and to become great men and great hockey players. And that’s what life is all about. Gordon Bombay now, and Gordon Bombay forever.