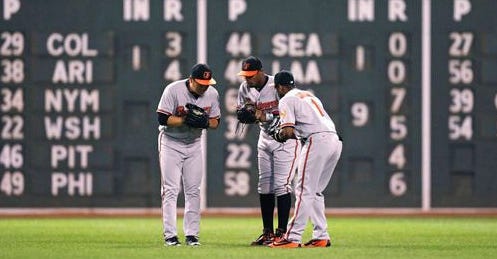 Let’s cut to the chase, the Orioles just completed their biggest road trip of the year, a three city- nine game trip against the last place team in their division, a team nipping at their heels for the wild card spot, and the top team in their division. The Orioles went 6-3 on that road trip, but after last night’s loss, their record sits at 80-66, two game behind Boston for first as they come home for 11 straight at home. This goes without saying, but it’s the biggest home stand of the season as they welcome the Rays for four, Red Sox for four, and Arizona for three. All the good they did on that road trip goes to waste if the O’s can’t do some damage against the Rays though. 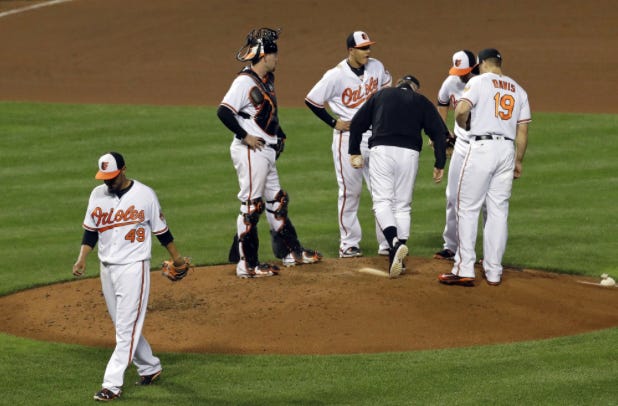 Last night they did not do that. Yovani Gallardo was his normal trash self. Seven hits and six ER in just 3.1 IP. It’s hard for your offense to come back from deficits before they even step in the box, but the offense did just that last night, scoring four after Gallardo started the game with back-t0-back walks and then served a meatball up to Evan Longoria. But no worries, because Yovani came right back out and let the Rays tie it in second, before he gave up another run in the third. The fans cheered as Buck yanked Gallardo, and with good reason. The guy sucks. He has been terrible all year, has an ERA just under 6, he doesn’t go deep into games, pisses down his leg in the first inning, and puts the O’s in a hole everytime he goes out there. We know Mike Wright isn’t any better, and Tyler Wilson hasn’t been good either. Can Joe Gunkel be any worse than Yovani? Why not take him for a test drive?

And to top it off, Yovani told reporters that he had gone over a week between starts, but said it wasn’t an excuse. Hey Yovani, there is a reason you went over a week between starts, because you’re not very good. Get this guy out of my face. Bury him on the bench and have him figure this stuff out in the offseason, I think all of Birdland is done with him. I hate that even in September with expanded rosters, Buck is still trotting out Nolan Reimold and Yovani Gallardo to try and win games. It wasn’t all Gallardo’s fault, well it pretty much was. But the offense went silent after the first, going 1-13 with RISP after they scored four in the first, like I said, you can’t expect them to be able to battle back every time. Machado, Trumbo, and Davis alone left 15 guys on, the bats do need to come through at some point. 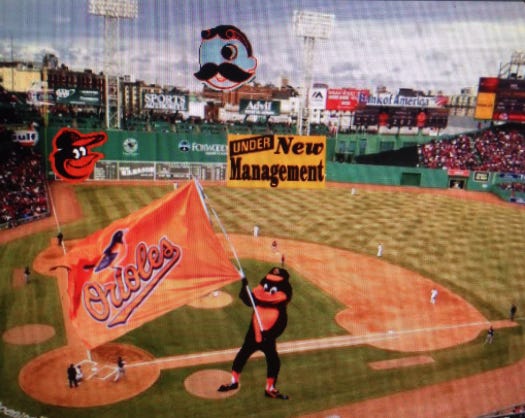 The Orioles handled their business on their road trip, going 6-3 against Tampa, Detroit, and Boston. With one run losses in Tampa, and Detroit, the O’s were very close to a 8-1 road trip which would have slid them into first place after taking the Boston series. The shining moment of the Detroit series was the return of Chris Tillman. Tillman, who hadn’t pitched since August 20th, gave up four hits, one run, walked one, and struck out four in six innings. His pitching performance, coupled with a Michael Bourn two run homer and a Schoop shot off Justin Verlander gave the O’s the series win and sent them off to Boston. The big key in this series was keeping Miggy off the bases. Normally he is an Orioles killer, not this series, O’s pitching was able to hold him to 0-9 with 2 walks in the series.

O’s went to Boston and got their teeth kicked in during the first game. For how bad Yovani Gallardo has been, Wade Miley has been much worse during his time here. For the second time in five starts, Miley failed to get out of the second inning, giving up 6 ER in 1.1 IP on Monday night. Game was over before it even started. Miley has been an abortion of a trade this season, and is another guy who I don’t want to see pitch for the Orioles again. As I stated before, there is no one else available, but something has to happen. He has given up 33 ER in 35 IP with a WHIP of 1.87, an ERA of 8.41 and is 1-5 since coming to Baltimore. O’s lost game 1 by the score of 12-2

Other than the Wade Miley start, the Boston series was great. Dylan Bundy picked them up the next night, Drew Pomeranz got knocked around by J.J. Hardy and Nolan Reimold, and the O’s pulled out a 6-3 win. Oh yeah, Zach Britton made Xander Bogaerts look like a complete fool. During the series, Britton picked up his 43rd save, and lowered his ERA to 0.61. Historic numbers here people.

The rubber match of the series came down to Cy Young candidate, Rick Porcello, and Kevin Gausman.  It was an all around great game that ended with the O’s winning 1-0 on a Mark Trumbo home run that may not have landed yet. Adam Jones should have had at least 2 homers off Porcello, but the wind was able to knock them down. Boston just couldn’t get anything going against Gausman, and the O’s made Trumbo’s homer hold up. I talked about it last week, but Kevin Gausman has absolutely turned a corner and is a complete stud right now. Gausman went 8 strong innings only allowing four hits, one walk, and six Ks. Over his last five starts, Kevin is 4-0 with a 0.82 ERA and 33 Ks in 32 IP.

Gausman outpitched the 20-game winner, and the O’s handed Porcello his first loss at home on the season. Another key to this series was not letting Mookie Betts get to them. Mookie has owned them this season, but went 2-13 in this series. That win brought them within one game of the division lead. Couldn’t have asked for much more out of this road trip. Red Sox outscored the O’s 15-9, but yeah, run differential, right Jared? Figured I would throw in this nice little tidbit about the Orioles and Red Sox too.

With 10 games left on this homestand, I’d say if the O’s could win 6, they would be in good shape. They will likely get Darren O’Day back this weekend to help that bullpen and some of the overworked guys in there. And would it kill Buck to put Hyun-Soo Kim in the lineup? Kim is hitting .308 with an OBP of .389, and only has 12 at-bats this month.

Last homestand of the season, so get out there and get to some of these games, these are all winnable series coming up, this could be the stretch of games that pushes them into the playoffs. This team isn’t looking at the wild card anymore, they are right in this race for the division.