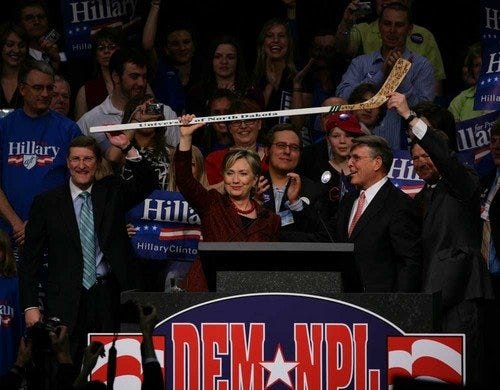 Hear me out on this one real quick. I hate talking politics just as much as the next guy. This entire election cycle has been draining and regardless of who wins in November, I’m just glad that we only have 2 more months of this. With that being said, the past week or so has brought a major revelation in this election to light. Something that I think will finally restore some sense and order to this cluster fuck we call the 2016 Presidential Election. Is Hillary Clinton secretly a hockey player? Because it sure as heck seems that way.

Think about it. What has been the biggest knock on Hillary this entire election? She doesn’t disclose anything. Whether it be deleting emails or hiding the fact that she has pneumonia from the public, Hillary Clinton is all about keeping things in house. Upper body injury, lower body injury, you’re not going to get many specific details from Hilldawg no matter how much you ask.

Secondly–her constant pandering to the millennial vote sticks out as another key sign that Hillary is secretly a hockey player. Nobody tries to force others to like them more than Hillary Rodham Clinton, and the game of hockey. Doing the whip and nae-nae on Ellen? Well it’s just a sad sad display of Please Like My Candidate.