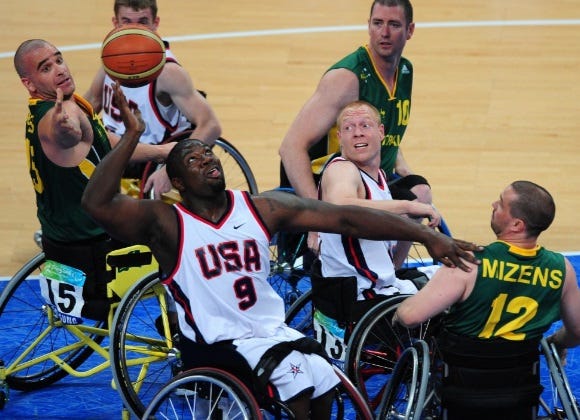 I was at the bar with four TV’s on and I had the choice of either gazing at my beloved Phils getting dickswept, the Goddamn Mets, That’s So Raven (I don’t know, either) or Wheelchair Basketball…and I’m not gonna lie, I was outright CAPTIVATED by ball on wheels. It was like nothing I’ve ever seen before. The action, effort, and bumper car violence was non-stop. The only thing missing was Jason Street and his boys switching wheelchair sports and tearing up the court. The USA Men’s team takes on Turkey tonight at 9pm while the USA Women on wheels face Great Britain at 11:45. There should be no reason that they don’t literally roll through the competition.

I searched around for video highlights from the games and couldn’t find much (damn you, Paraolympic Compyrights), but to get a glimpse of the action wheelchair basketball brings here’s an A+ highlight from a few years back.

Sweet shot even though the ref missed an obvious walk at half court.

I’m honestly mesmerized with wheelchair basketball now from watching the Rio Paralympic Games and this :50 sec clip. I never even thought about it before, but the game is actually fun as fuck to watch. Just crash city all over the place and it definitely looks harder to play than “able bodied” ball. Try dribbling a basketball down the court with two defenders wheeling in 20+ mph in a steel car while still having to deal with the mental anguish of never being able to feel your dick. And what are the rules? Is there even traveling? Do you play defense or is it straight up bumper chairs? I’m not even trying to be a ass, I’m legitimately interested. I’m forever watching the shit out of wheelchair basketball when it’s on.

Order of Types of Basketball I Would Watch: