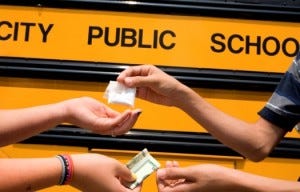 Fox 5 - Police are investigating after they say a kindergarten student in New Jersey’s capital city brought 30 packs of heroin to school.

Police were called to the International Academy of Trenton on Monday.

Police tell The Trentonian newspaper a teacher thought the 5-year-old was playing with a candy wrapper when she looked in his lunchbox and found 29 other packets of the drug.

The boy was taken to a hospital, where he tested negative for opiates.

Guess what? I’m now in a drug war. As a new resident of the great state of New Jersey, I never intended on getting into a drug war, but I find that now I have no choice. I cannot have some dopey ass kindergartener being heavier in the drug game than I am. Pulling the strings and owning the streets. I pay too much in rent for a 5 year old to dictate my life like that. Do I want to dive headfirst into the drug game? Absolutely not. I didn’t move here to start wheeling and dealing heroin. But I took a long, hard look in the mirror and decided I wasn’t ready to let some punk ass 5 year old run the NJ heroin trade. Because when it comes down to it, if some 5 year old can start a drug empire, I can start a drug empire. I can do everything that shit head can do, plus do things like tie my own shoes and wipe my own ass. So I’d like to put that asshole’s life on notice. He might think he’s slick slinging black tar by the monkey bars or trading baggies in social studies class for pecks on the cheek in the cubbies, but he won’t be doing it much longer. It’s all fun and games til a 5 year old eats led for coming into my territory. Stay woke, munchkin. Stay woke.