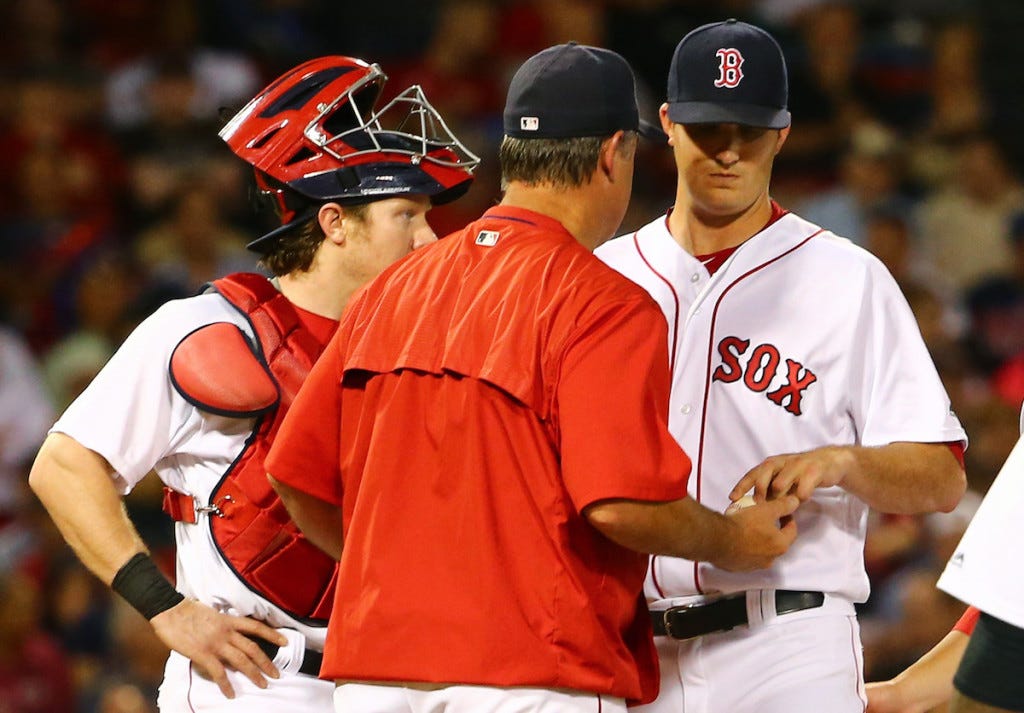 Drew Pomeranz has given up a lot of home runs in the American League. That’s okay, because, for the most part, the home runs haven’t hurt him. Last night, they did.

Since being traded to the Red Sox on July 20, Pomeranz has allowed 12 home runs in 58.2 innings over 11 starts. During his Red Sox tenure, he’s allowing 1.84 home runs per nine innings, which is the 7th worst rate in the MLB out of the 79 pitchers who qualify over that span. Like I said, though, they haven’t really hurt him much. He’s allowed at least one home run in 10 of his 11 starts in Boston, yet he had a 3.35 ERA from his second start with the Red Sox leading up to last night.

After last night’s loss, in which Pomeranz was unable to go more than two innings, allowing five earned runs on four hits, two of which were home runs, the Red Sox fell to 4-7 in games that Pomeranz has started. As I just highlighted, Pomeranz has been pretty good for the Red Sox for the bulk of his time here. However, since scoring 11 runs for him in his Red Sox debut against San Francisco, the Red Sox have averaged 2.5 runs per game for Pomeranz over his last 10 starts. That, of course, was no excuse for the lefty last night, but it’s worth noting that they haven’t scored for him at all, so that 4-7 record when he takes the mound is a bit misleading.

Here’s a stat for you — Since August 9, Boston has played 34 games (21-13), and a Red Sox starter has been charged with a loss just seven times over that span. Of those seven losses, Pomeranz (3) and Eduardo Rodriguez (2) account for five of them (Henry Owens and Steven Wright the other two). Since August 9, Pomeranz and Rodriguez have combined to go 2-5 with a 3.15 ERA and 1.02 WHIP. Run support, man. I know that seems out of place, considering that a lack of run support wasn’t the storyline after this loss to Baltimore, but I just thought it was worth noting, because I’m sure that the “Pomeranz sucks” mob is going to come out after Tuesday night’s stinker, which was an anomaly for Pomeranz, despite the team’s record when he pitches.

But how ’bout this fuckin’ Red Sox bullpen, huh? The bullpen was supposed to be the downfall of this team, which wasn’t an inaccurate notion for most of the year, but look at them now! Get this — in the month of September…the Red Sox…have the best bullpen…in the majors. Yup. Fact. With an ERA of 0.94, Boston’s bullpen sits atop the entire MLB for the month of September, in addition to having the best bullpen WHIP (1.05) in the American League this month, too.

Last night, Heath Hembree, Joe Kelly, Matt Barnes, Robbie Ross Jr., Noe Ramirez and Fernando Abad combined to throw seven innings of one-run ball, the one run being a home run surrendered by Ramirez. And really, it could’ve been a shutout for the bullpen, because I have no fucking clue why Ramirez was in that game in the spot that he was pitching in. Good guy, decent reliever, but this motherfucker was in Pawtucket all year. WHY is he the guy that John Farrell had on the mound in the 8th inning with the bases loaded against the team with the most homers in the majors? He ended up getting out of the inning, but give me ONE good reason why that wasn’t Brad Ziegler instead?

Why haven’t the beat writers asked Farrell about this? Farrell’s usage of Ziegler, or lack thereof, is honestly baffling in every sense of the word. Since making his first appearance for the Red Sox on July 10, Ziegler has appeared in 23 games, and he’s allowed zero earned runs in 21 of them. Zero earned runs in his last 11 appearances, as well. But, no. We’re going with Petey Pawtucket here with the game on the line, after the Blue Jays game had already gone final, and everybody in the ballpark knew that Toronto lost.

It makes zero sense. News broke that Ziegler had the flu on August 30, but he’s been available since September 3. The most important month of the season, and Ziegler has been used three times. Three. And two of them were in blowouts — two thirds of an inning in their 7-2 win in San Diego, and an inning in Toronto when it was 11-2 — so he’s really only been used in a spot that he should be used in once all month. I need an explanation for that, but it seems like none of the beat writers want to question Farrell’s logic. Either that, or they know something that we don’t, which wouldn’t be out of the realm of possibility, considering that the beat writers didn’t even break the Ziegler flu news on August 30 until AFTER the game had ended (before the manager had spoken to reporters), and AFTER Twitter lost their collective minds when Ziegler wasn’t used in a spot that he should’ve been used in.

But you wanna know how good the Red Sox bullpen has been this month? Brad Ziegler, Koji Uehara, Junichi Tazawa, Craig Kimbrel, Fernando Abad, Robbie Ross Jr., Joe Kelly and Matt Barnes have combined to throw 22.2 innings in September with a 0.00 ERA, 28 strikeouts to 7 walks, a 0.97 WHIP and a mark of 11.12 strikeouts per nine innings. Combine that with the fact that the Red Sox have led the majors in just about every major offensive category for the entire season, and the fact that Red Sox starting pitchers have the best ERA in the American League since the All Star break (3.62), and I’d say your Boston Red Sox are in pretty good shape.