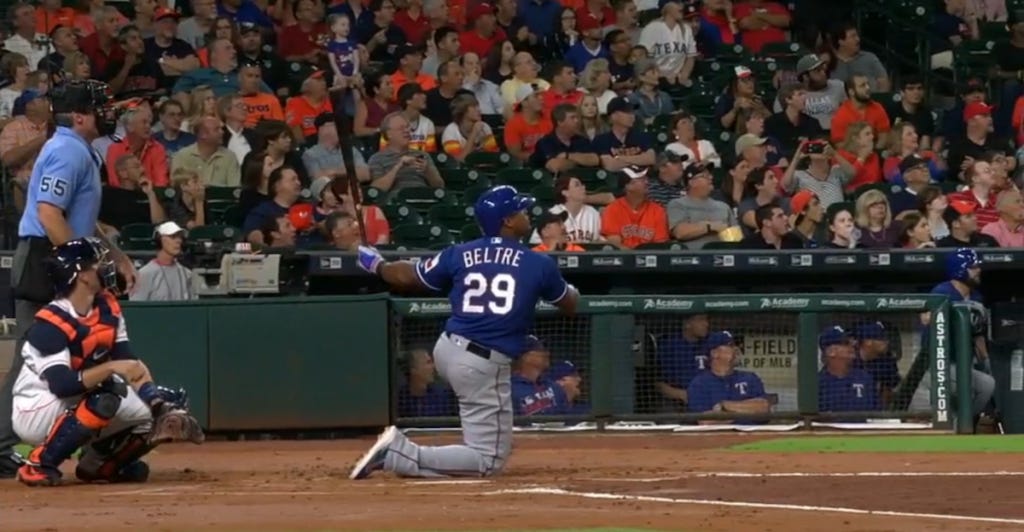 David Ortiz being 40 years old and having 33 homers and 111 RBI is ruining it for guys like Adrian Beltre, who’s 37 years old, and now has 30 home runs and 97 RBI. Ortiz is out here making it look easy for these old guys, but in reality, what Beltre is doing at the age of 37 is pretty damn impressive, while what Ortiz is doing is borderline impossible. Fellow old guy teammate of Beltre, Carlos Beltran is 39 years old, and he’s got himself 27 homers and 87 RBI between the Yankees and the Rangers this season.

However, Beltran hasn’t had a crazy amount of success since coming to Texas, hitting .278 with a .767 OPS, which ranks 103rd in the MLB since he joined the Rangers. But where Beltran has been lacking, Beltre has stepped it up. In the 99 games prior to the Beltran trade, Beltre hit .279 with a .788 OPS. Since Beltran arrived, Beltre is hitting .344 with a 1.082 OPS, 8 doubles, 14 home runs, and 32 RBI in 40 games. But it’s weird — Beltran hasn’t been particularly outstanding offensively with Texas, but he’s consistently been hitting third in the lineup, while the Rangers’ other trade deadline acquisition, Jonathan Lucroy, has had a great deal of success since the trade, only he’s been hitting anywhere from leadoff, to fifth, to sixth, to seventh, and he’s hit ninth in two of his last three games.

Since coming over from the Milwaukee Brewers, Lucroy is hitting an even .300 with a .973 OPS, second to only Beltre for the team lead. In fact, since August 2, Beltre and Lucroy have combined to hit .326 with a 1.036 OPS, 12 doubles, 24 home runs, and 57 RBI, while Rougned Odor, Ian Desmond, Carlos Beltran, Elvis Andrus, Mitch Moreland, Nomar Mazara, Carlos Gomez, Jurickson Profar, and Shin-Soo Choo (DL since August 16) have combined to hit .251 with a .721 OPS and 30 homers between all nine of them, just six more than Beltre and Lucroy alone. Over that span, the Rangers have the best record in the American League at 25-15, second best in the majors, so they can thank Beltre and Lucroy for that.