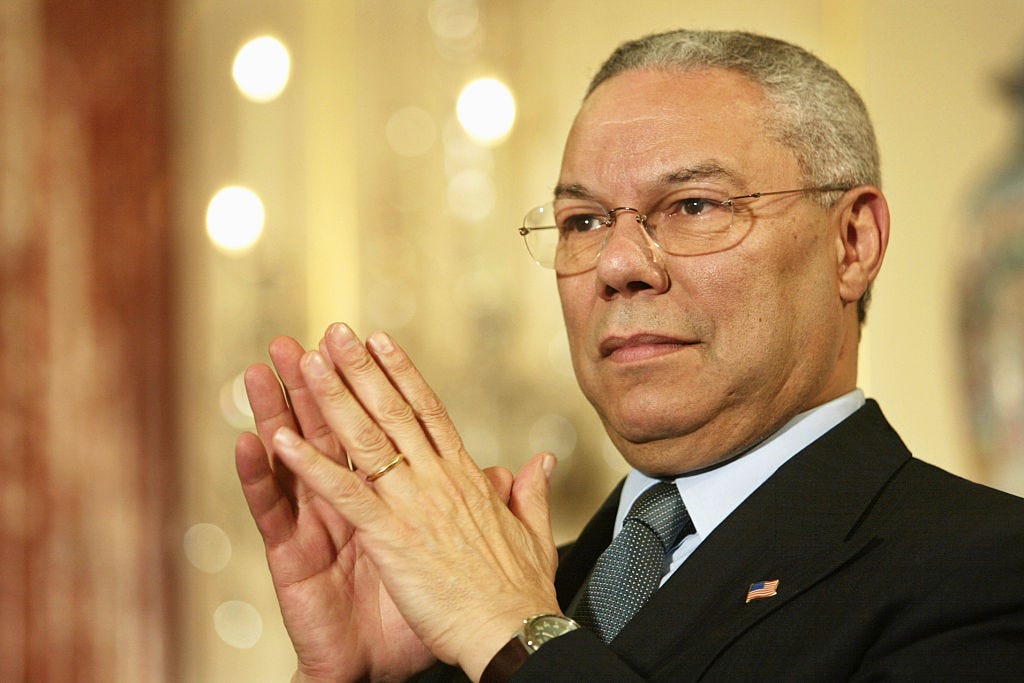 Colin Powell is of course the former Secretary of State. He served under George W. Bush from 2001-2005, one of the most tumultuous foreign affairs periods in our country’s history. He’s also a retired four-star general, so he knows his shit, has earned his stripes, and should be taken seriously.

About 30,000 of his personal emails have reportedly been hacked, sent to DCLeaks, and published by Buzzfeed. It is important to note that DCLeaks is widely and confidently believed to have Russian ties; they’re commonly accused of trying to influence the election.

Powell covers a lot of bases over 30,000 emails. Despite my affection for reading about politics and news and the personal emails of retired U.S. officials, I have not read all 30,000 emails. But I have Googled ‘em, which makes me a damn good Barstool blogger.

He’s kinda ripping on everyone. Go to one website, tells you how he ripped on Trump. Go to another, how he shit on Clinton. Another? Rumsfeld. 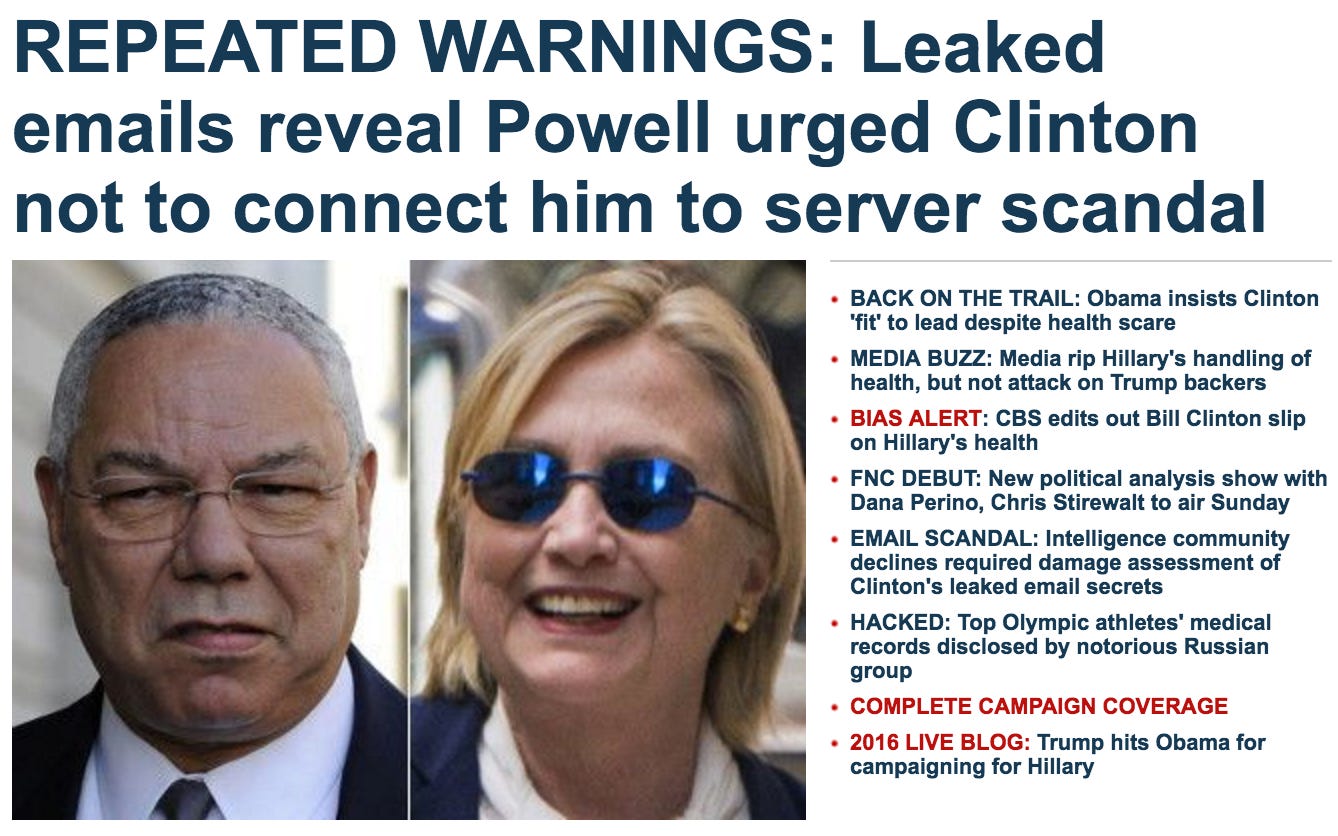 So rather than pick one and harp on it, let’s congregate and take a look at a bunch of stuff he hit on. 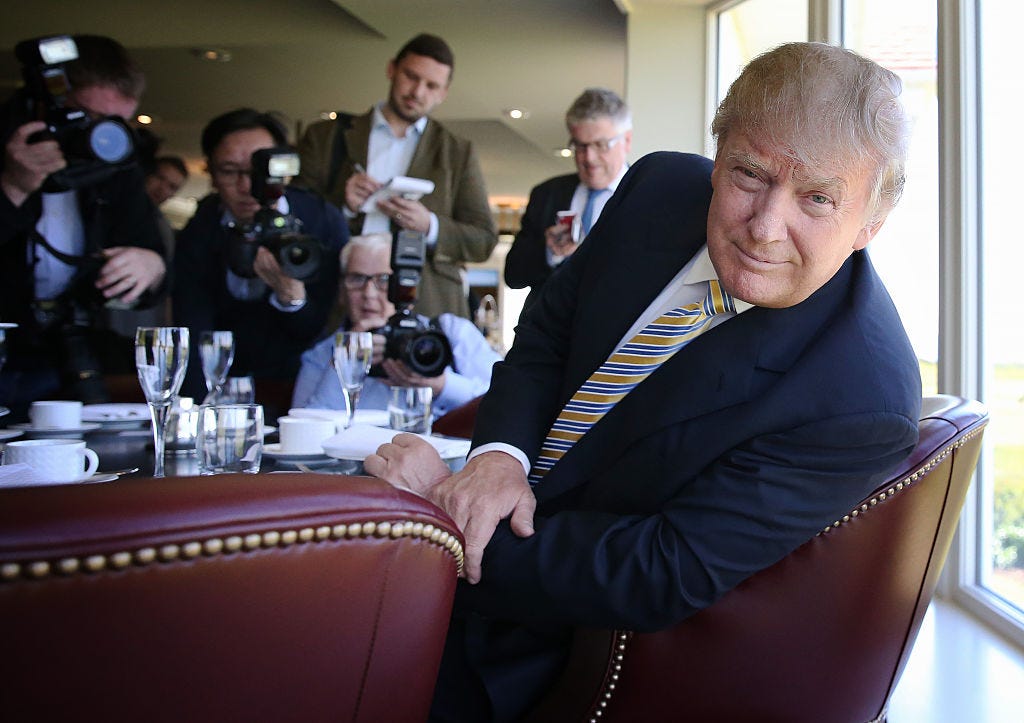 Powell allegedly made the remarks about Trump in a June 17, 2016, email to Emily Miller, a journalist who once worked under Powell as a deputy press secretary at the State Department. In the email Powell said Trump, “is in the process of destroying himself, no need for the Dems to attack him,” according to BuzzFeed. “Paul Ryan is calibrating his position again,” Powell said of the speaker of the House who had only recently decided to endorse Trump at the time of the email. (USA Today)

In an Aug. 21 email, Powell told Miller, “the whole birther movement was racist,” according to BuzzFeed. “That’s what the 99% believe. When Trump couldn’t keep that up he said he also wanted to see if the certificate noted that he was a Muslim.” (USA Today) 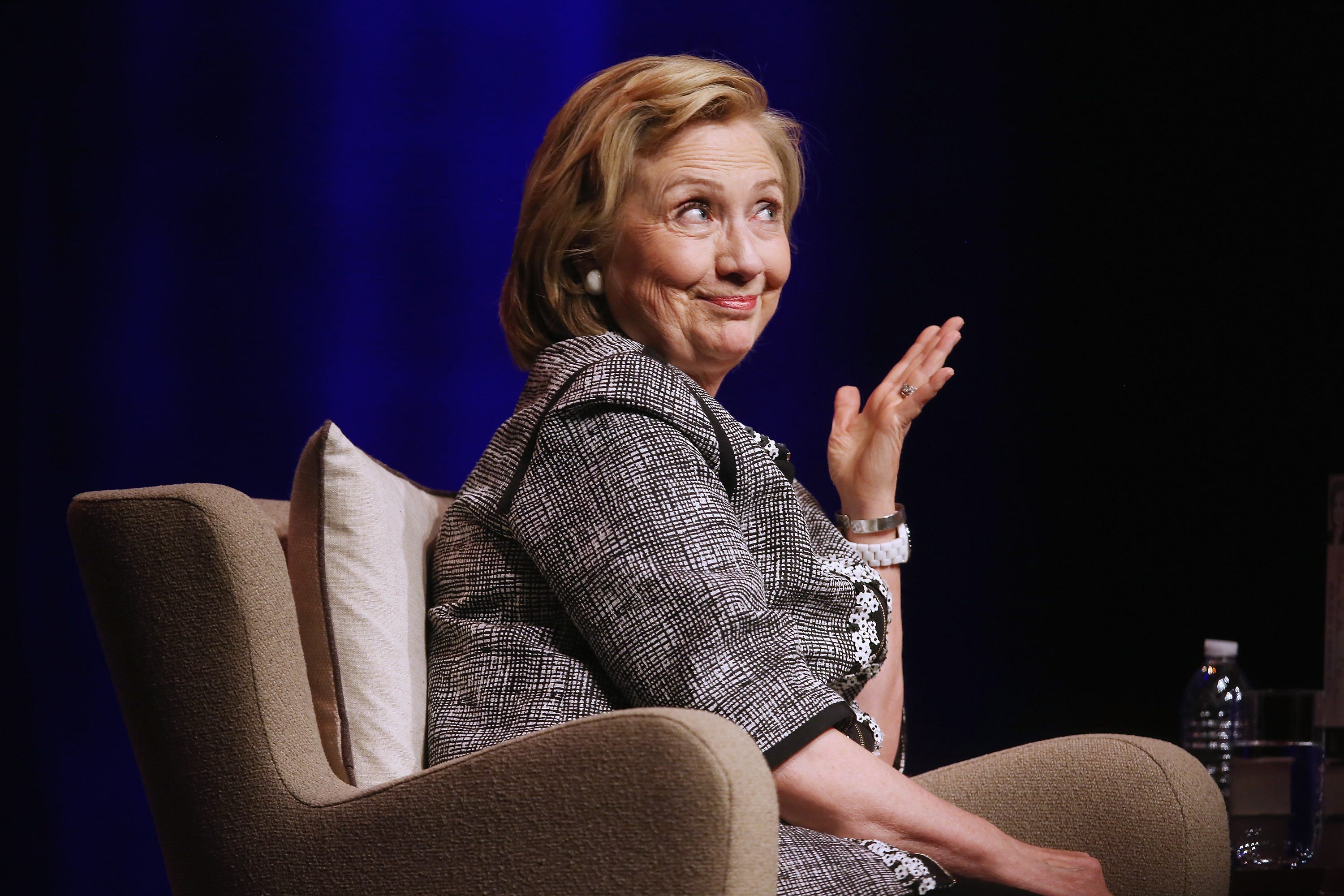 The Clinton campaign and its surrogates have frequently cited Powell’s use of person email in defending the Democratic nominee… Powell wrote that he told Clinton’s “minions repeatedly that they are making a mistake trying to drag me in, yet they still try. The media isn’t fooled and she is getting crucified,” according to BuzzFeed. “The differences are profound and they know it…” “Been having fun with emailgate,” Powell wrote on March 9, 2015, days after the news broke about Clinton’s use of a personal server, according to The Daily Caller. “Hillary’s mafia keeps trying to suck me into it.” (USA Today)

“I told her staff three times not to try that gambit. I had to throw a mini tantrum at a Hampton’s party to get their attention. She keeps tripping into these ‘character’ minefields,” he wrote, according to The Intercept. He reportedly had tried to settle the matter in a meeting with Clinton aide Cheryl Mills. (Fox News)

“They are going to dick up the legitimate and necessary use of emails with friggin (sic) record rules. I saw email more like a telephone than a cable machine,” Powell wrote to business partner Jeffrey Leeds, as first reported by The Intercept. “As long as the stuff is unclassified. I had a secure State.gov machine. Everything HRC touches she kind of screws up with hubris.” (Fox News) 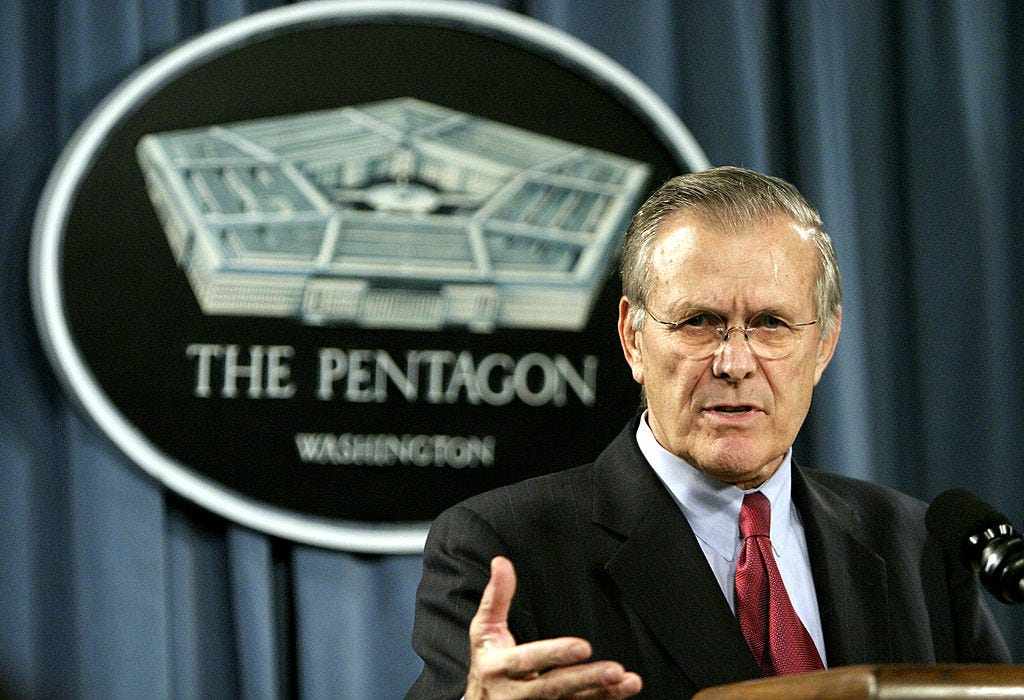 Powell initiated [a] 2015 exchange by emailing [Condoleezza] Rice, who was the national security adviser at the time of the Iraq invasion, with a link to Woodward’s comments.

“First, we didn’t invade Iraq to bring democracy — but once we overthrew Saddam, we had a view of what should follow,” Rice responded. “If Don and the Pentagon had done their job (after claiming the rights to lead post-war rebuilding—things might have turned out differently).”

“Don should just stop talking,” she added. “He puts his foot in his mouth every time.”

Powell replied by seconding Rice’s critique, saying “the boys in the band were brain dead.”

“Doug and Paul claims they had a plan (turn Iraq and our Army over to Chalibi) and leave,” Powell wrote, appearing to reference Bush administration officials Doug Feith, Paul Wolfowitz, and the late Iraqi politician Ahmed Chalabi, who died last year.

“43 knew what had to be done,” Powell continued, referring to President George W. Bush, “specifically rejected the Chalibi crowd and as you say the boys in the band were brain dead.” (Buzzfeed)

In conclusion, Powell really likes to go after the lowest hanging fruit eh? Rips Trump, Clinton and Rumsfeld? Are those 3 ever not shit on these days? Trump’s a clown. Hillary’s an alien. And Rumsfeld’s just a massive dick who everyone has no problem blaming for Iraq and basically everything that’s wrong in the Middle East.

Way to go out on a limb, Colin.

Additions: Annnnd the best for last.

This is a good Colin Powell email pic.twitter.com/66krJvciYL 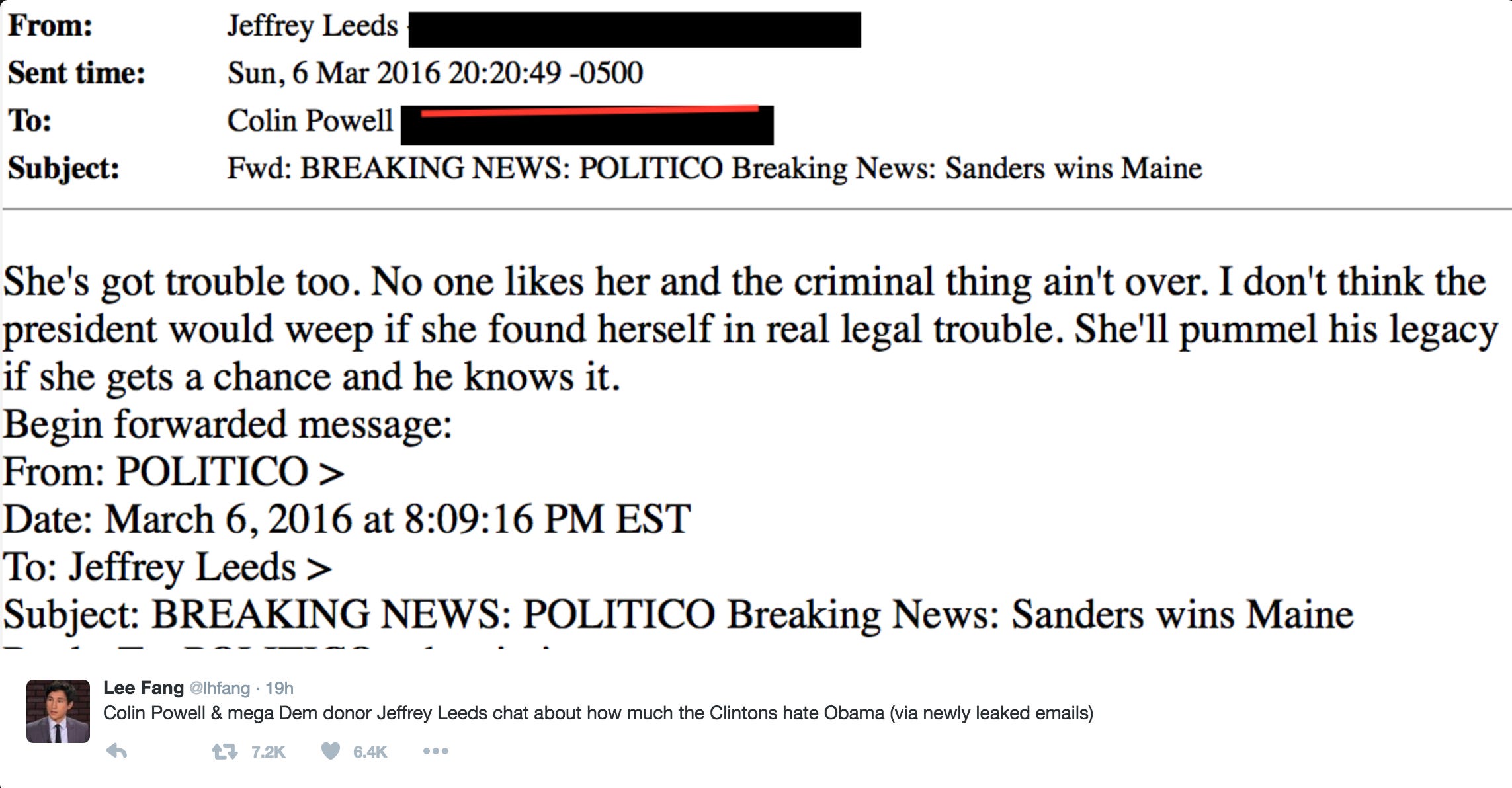