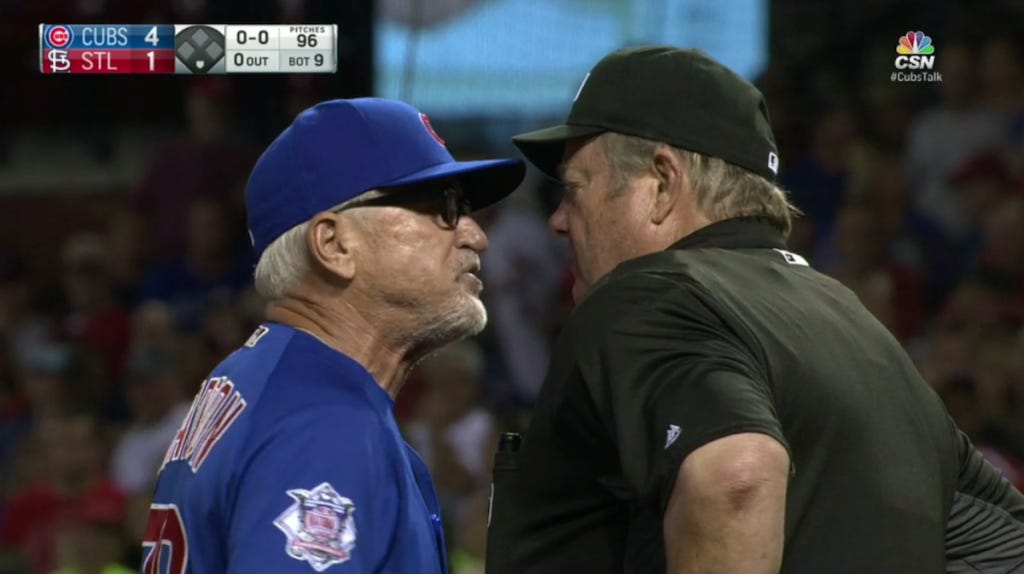 I almost didn’t want to see this, because it had Floyd Mayweather vs. Manny Pacquiao written all over it. Some dream match-ups are just that — a dream. When you get two of the best ever at what they do head-to-head with the lights shining bright, your expectations are so high that you can only be let down. Not here, not last night. This was the showdown that I’ve been waiting to see for quite some time. You’ve got the old baseball sayings of “Nobody pays to watch you umpire” and “Nobody came here to watch managers manage,” and nobody exemplifies both of those two statements more than Cowboy Joe West and Cubs manager, Joe Maddon. The Umpire Show is Joe West, and Joe West is the Umpire Show, and nobody in the history of the game over-manages quite like Joe Maddon.

The stars finally aligned in the ninth inning of last night’s Cubs game against the St. Louis Cardinals after Kyle Hendricks lost his no-hitter to start the frame. Once the no-hitter was gone, Maddon wanted to get his starter out of the game, because 8 innings and 96 pitches was plenty, and Aroldis Chapman hadn’t worked since Friday. The no-hitter and the shutout ended pretty abruptly, so Maddon stepped out to tell his infielders to have a little conference at the mound to buy Chapman some more time to warm up. Joe West counted that as a mound visit for Maddon, hence the “What the fuck’d you do that for?” and we’re off!

On the outside, we see an angry manager trying to argue a semi-bullshit call by a notoriously “look at me” kind of umpire. But in reality, we’re watching two artists paint a masterpiece. Maddon is stalling the shit out of this situation so that Chapman can continue to warm up, and West is getting his shouting match in so that all eyes are on him, just like he wants. It’s fucking beautiful. I love it.

And the best part about this whole thing? Maddon says, “I know you just threw me out of this game, but fuck you, I’m going to go make this pitching change, anyway,” and Joe West lets him. Poetry. End scene. Roses at their feet. Standing ovation. So, the next time that somebody says we don’t pay to watch umpires umpire or managers manage, show them this video, and tell them that there are exceptions to the rule.