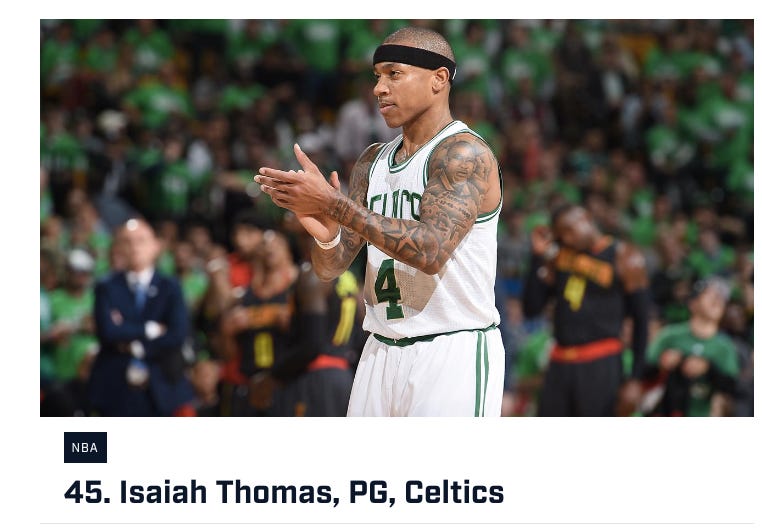 When I saw a tweet about this on my timeline, I 100% thought it was an article written by The Onion. Upon clicking the link and being directed to a real website, with real people giving real opinions, I damn near spit out my coffee that I was in fact drinking. The thing with lists like this, is it’s basically 100% subjective. My list will look different from your list, and your list will look different from someone else’s. That’s fine, and something I understand. What I cannot, no WILL NOT understand is what Sports Illustrated did to our boy (and my best friend) Isaiah Thomas.

Look, Isaiah being disrespected is nothing new. In fact, my entire online persona revolves around fighting this injustice. Arguing if he can be your best player on a title team, is he a 1/2/3 all that shit is for a different day. What I want to talk about is this batch of writers, and their editors, decided to say that 44 other NBA players are better than Isaiah Thomas. FORTY-FOUR. Do you know how ridiculous that sounds? It shouldn’t come as a surprise, we’ve been down this road before, but I cannot sit here and let this shit go unchecked. Can’t do it, won’t do it.

Lets start with how SI even came up with this ranking, in their own words

Given the wide variety of candidates involved and the deep analytical resources available, no single, definitive criterion was used to form this list. Instead, rankings were assigned based on a fluid combination of subjective assessment and objective data, including: per-game and per-minute statistics, splits, advanced metrics, play-type data and more. This list is an earnest attempt to evaluate each player in a vacuum. As a result, future prospects beyond this season did not play a part in the ranking process. Our sole concern was how players are likely to perform in the coming season alone.

Ok got it, you used real life statistics and metrics to help form this list. That makes sense, until you look at the actual fucking list. There were so many to choose from I won’t force you to read them all, but here are a select few that stood out

Ok first up, lets look at the per game data. Yup, Khris averaged less points/assists, had only 0.8 more rebounds per game, and had a much lower PER at 16.8. Ok now let’s look at advanced metrics. Middleton had a worse offensive rating of 109 and a worse defensive rating of 110. In other words, the biggest thing people want to knock Isaiah about (defense) this guy was worse. Ok lets also look at usage rate, which basically tells you how much a player is used. Oh, Middleton loses there too at a rate of 23% to Isaiah’s 29%. Factor in lesser win shares (6.9 to 9.7) I am confident in saying that Khris Middleton is NOT a better NBA player than Isaiah Thomas. Idiots.

This is where SI can’t make up their fucking mind. Is this list about “how players are likely to perform in the coming season alone” like they suggest? Because the whole section on Wade is basically a tribute to his past. His CURRENT numbers, based on you know, what he is CURRENTLY doing, are not better than Isaiah. Fewer points/assists/PER etc while also having a win share that’s basically half of Isaiah’s (4.9). Is the Wade of old a better player than Isaiah, perhaps, but 2016 Dwayne Wade no fucking chance.

See everything just said above

Over my dead body is the 5th option on a team better than Isaiah. Right off the bat I’m sure people will want to talk about Iggy’s defense being the biggest factor. Ok, sure, but that would be ignoring the facts. Iggy has a defensie rating of 105 on one of the best defensive teams in the league. Isaiah sits nicely at 107. Here’s the other problem with putting Iggy here ahead of Isaiah. They say things like advanced metrics are used in this list, well Iggy has HALF the usage rate Isaiah does, and half the win shares. So no, This is not correct.

But then then maybe the biggest shade was thrown.

So if I’m reading this correctly, a player that averages less points/assists/PER/usage rate/team Ws/Offensive rating and wasn’t an All Star over his PG counterpart, is a better NBA player? No chance in HELL. I’m not saying Kemba isn’t a good player, or that he didn’t have a great year. It just wasn’t as good as Isaiah’s and that’s fact not opinion. Again people will want to talk about his defense and not realize its basically the same as Isaiah’s (105 vs 107 rating). If you want to make the argument that both are low on this list, I’ll listen, but get the fuck out of my face with this garbage. There is no reason Kemba should be NINE spots ahead of Isaiah, let alone ahead at all.

But as my friend says “women lie, men lie, numbers don’t”. I don’t need some bullshit Sports Illustrated list to validate what I know in my heart is true about Isaiah Thomas. You shouldn’t either. This is the life we live and who knows if people will ever wake up and realize that Isaiah is one of the Top 6 PG in the entire league, yet is the only All Star PG not in the top 30? Garbage, just garbage.

I mean by now you can probably guess that Conley has worse numbers even though he played 56 games. Way fewer points, with similar assists and rebounds, yet lower PER and win share. The reasons for putting Conley at this spot are just comical. They called him a stifling perimeter defender when healthy. Hm, is that why his career defensive rating is 107? Not to mention it was 110 last year, which was you know, worse than Isaiah. Conley’s contract should have been reward enough, ranking him almost 20 spots higher than Isaiah is a travesty

Whole lot of recency bias here. Swap Isaiah and Kyrie and Cavs still win a title. Production is similar, you want to rank Kyrie 25 sure, but Isaiah needs to be right there. Cool, Kyrie can score, good thing he scored less than Isaiah this past year. Guy had ONE double digit assist and plays on THAT team. Kyrie so overrated it makes my head spin.

Not only is this WAY to high for Lowry on its own, but here is another guard that Isaiah compared closely to, and yet is ranked 30 spots higher. In what world does that make sense? Now I can be fair, Lowry did have a slightly higher PER (22.2 vs 21.5) and win share (11.6 vs 9.7) but this is my whole point. He’s not SO much better than Isaiah that they should be so far apart. Even head to head they are close with 20/4/7 for Lowry and 22/3/6 for Isaiah so don’t tell me they aren’t close to the same player.

So thank you SI, for giving us that mid September fire as we head into training camp, and remember there are no redos. You made your bed, now watch Isaiah Thomas destroy it.

BUY A SHIRT TO SUPPORT OUR HERO 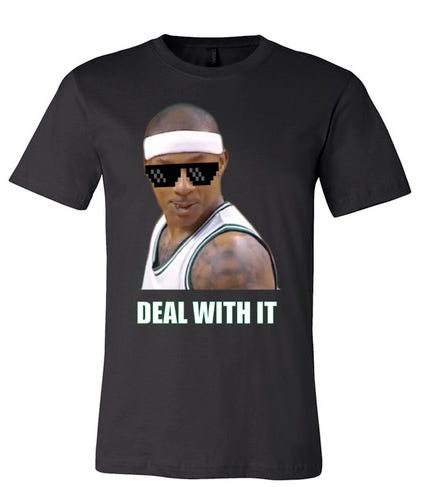