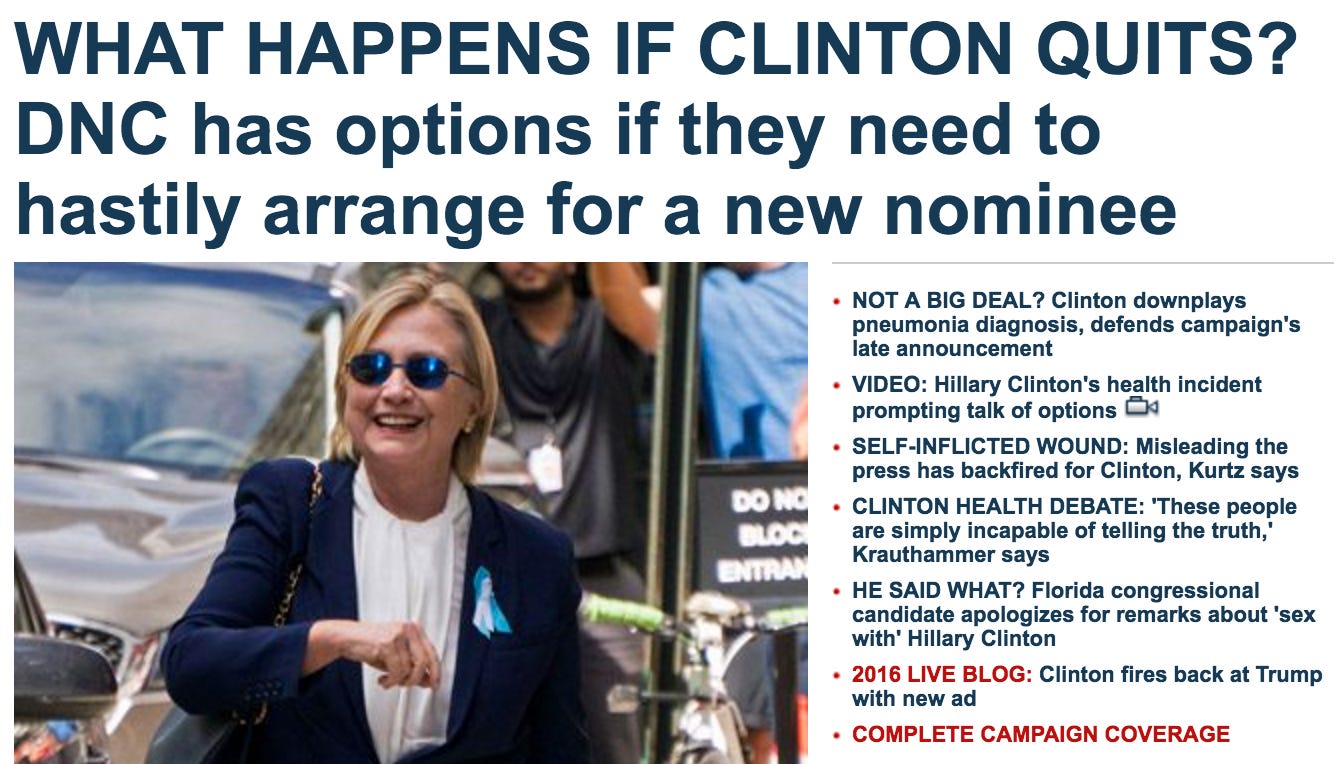 Fox News — What Happens If Clinton Drops Out?

Have to chime in here because these types of headlines are so ridiculous. No, Fox is not purely fair, balanced, neutral, unbiased, etc. etc. etc. I don’t give a shit that they’re blatantly right — it’s a brilliant business model that has provided a massive outlet to the “silent majority” and cultivated a huge following that makes them no. 1 in cable news by a MILE. It has served as an obvious and heavily-demanded alternative to traditional “liberal media.” Depending on the degree to which you believe the mainstream media leans left, you can argue Fox is a necessarily and balancing right-leaning outlet for America’s media landscape.

But that IS what it is. A right-leaning cable news outlet. Duh. Anybody with something remotely resembling an open mind knows that. And writing “DNC has options if they hastily need to arrange for a new nominee” is a headline so unfounded in anything reasonable or likely that the first line after they explain the headline actually says “analysts still see this scenario as exceedingly unlikely.”

The key factor making it negative infinity chance that Hillary’s replaced as the nominee? That it has to be HER call. She HAS to quit. Fox’s article includes this tweet from journalist David Shuster reiterating exactly that:

Top dem: “we can make contingencies, argue, plead with @HillaryClinton, but DNC bylaws are clear her nominee status now totally up to her.”

Look, with the 9/11 collapse Fox is obviously going to be writing a handful of followup articles. That’s how it works. Pageviews pageviews pageviews. But this type of article should be stuffed somewhere deep inside the political section, not gigantically plastered front and center. All it is is a regurgitation of the DNC’s bylaws on replacing a candidate. That’s it, which — if you were neutral — would never constitute being the top headline on your website.

But Fox panders to the right and that’s the whole point of this blog. Like I wrote in the first paragraph, that’s both obvious and fine. As long as everyone’s on the same page with it, it works. It’s when we’re not on the same page with that that we rabbit hole into shitty, fiercely partisan internet mudslinging that ruins 99% of the web and makes the internet one of the worst, least productive places in the world.