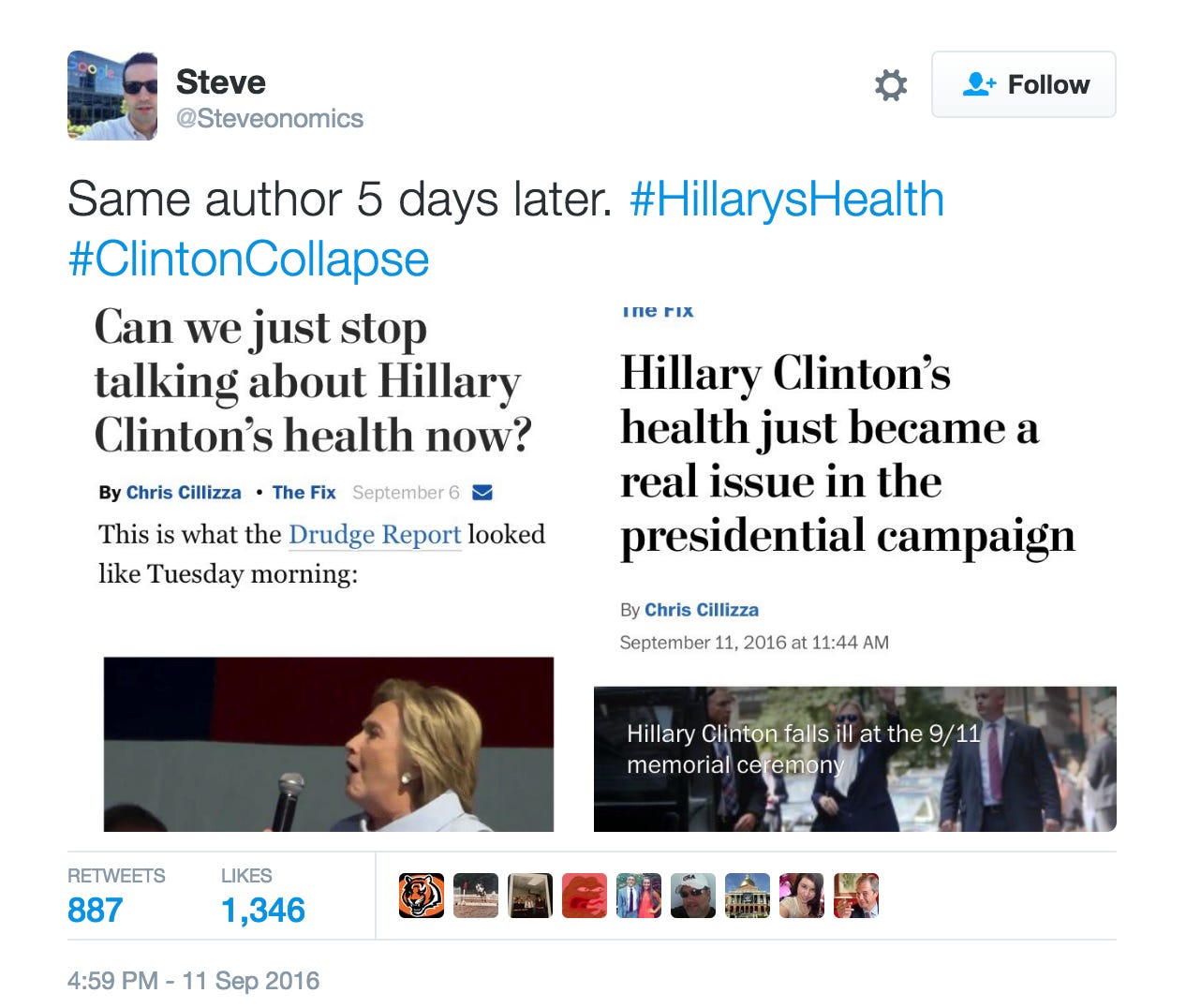 I held off on hopping in on the Hillary health thing as long as I could. Lotta tweets and emails pushing me to cover it, but I stayed away. Rose above the muck. Wasn’t really sure if anything was wrong with her and knew, obviously, that people that are anti-Hillary are going to nitpick every little thing. That’s how elections work. Hillary’s team was obviously concealing any and all possible signs of unhealthiness but that’s nothing new. Candidates always go above and beyond to appear as vibrant, energetic and healthy as possible. Always. Both Trump or Hillary would be the oldest elected president if he/she wins. When you’re 70 and 68 years old, shit goes wrong. You’re just unhealthy. I’m not even 30 yet and something’s always wrong with me. Haven’t felt 100% since this chick named Joy said she liked me in middle school (true story).

But Hillary yesterday was surreal. After weeks of denying rumors of unhealthiness, she zombie walks around at the 9/11 memorial, collapses, and gets stuffed into a van by her team? Are you kidding me?

BREAKING: THE VIDEO that caught #Hillary‘s episode as she is being helped into her van to head to the hospital. RT pic.twitter.com/MjyYDNuLU0

Unfuckingreal. Portnoy thinks she’s an alien. After the faint, she did this weird reappearance thing in an obvious effort to look like she’s fine.

Whatever the hell’s going on with her is now a central issue on the campaign. And it’s made it easy for us to point and laugh at people like this Washington Post guy for writing that we need to stop talking about Hillary’s health, only to follow it up 5 days later with a piece about how Hillary’s health is a real issue of the campaign.

How devastated was Chris Cillizza when Hillary collapsed yesterday? Watches the video and just immediately face palms. Knows his sweet piece about leaving Hillary’s health alone abruptly makes him look like a giant dumbass to the entire internet. Not sure how he let it get to the point where he had to cover the collapse himself. And with that contradictory of a headline. Feel like you have to tap in another writer there or at least publish under a pseudonym. Can’t just straight up write exact opposite headlines less than a week apart.

Keep this shit up we might have to find a desk for Chris over here at Barstool HQ. Having the very flaws of your #content drum up even more #content? Genius.