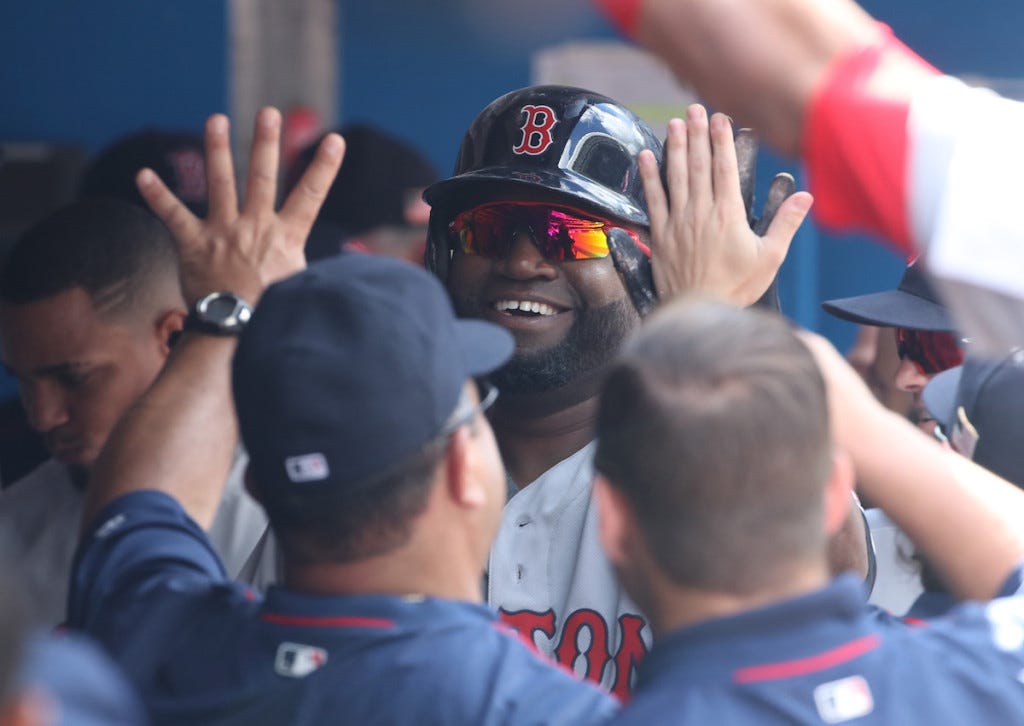 As far as losses go, it doesn’t get much more demoralizing for Toronto than their loss on Sunday, scoring eight runs and still losing at home. The Blue Jays had a team meeting after getting embarrassed on their home field on Friday night 13-3, and then squeaked out a win on Saturday with JA Happ on the mound, 3-2. But then it was right back to getting shoved in a locker on Sunday. The Red Sox jumped out to a 4-1 lead in the second inning after Jackie Bradley Jr. hammered a two-run bomb off of Cy Young contender Aaron Sanchez, his 24th of the season. John Farrell needs to put Bradley in the nine spot, and just keep him there. He’s hitting .358 with a 1.019 OPS in 35 games when hitting ninth this season, and .246 with an .803 OPS when he hits anywhere else.

You could tell how much this series meant to the Blue Jays and their fans. Toronto was in full panic mode all weekend long, aligning their rotation so that their three best starters would be going in this series, getting a reliever up and warming in the first inning on Friday, and then managing the game on Sunday like it was Game 7 of the World Series, with both teams combining to use 18 pitchers.

The Red Sox sent friggin’ Clay Buchholz to the mound on Sunday to take the series, when they could’ve used Drew Pomeranz (2.76 ERA in his last 7 starts) on regular rest. Buchholz got his shit rocked, just as bad as Sanchez did, allowing six earned runs in three innings, including a grand slam off the bat of Troy Tulowitzki. The TV call might’ve been mildly excessive, considering it was only the third inning, but hey. It’s Canada.

Here’s what Buchholz thought of that grand slam.

The Red Sox battled all day long. Momentum was non-existent in this game for the Blue Jays. Whenever it looked like momentum was shifting over to the Blue Jays’ dugout, the Red Sox would take it right back. After falling behind 6-4 following the Tulowitzki grand slam, Xander Bogaerts shot a two-run base hit up the middle in the next frame to tie the game. In the bottom half of the inning, Edwin Encarnacion crushed his second home run of the game, and then in the next inning, Hanley Ramirez murdered a baseball to dead center to make it an 8-7 game. Toronto Blue Jays fans went NUTS for this Hanley home run. What a moment! Go team!

Still trailing by one run, needing the biggest hit of the season, who do you think came through for the Red Sox? David Ortiz. Again. In his final season, Ortiz has done the seemingly impossible by having one of the greatest seasons of his entire career, and it continued on Sunday when he massacred a baseball over the right field fence, a three-run shot to give Boston a 10-8 lead that they would not relinquish. There are only two players in Major League Baseball with an OPS over 1.000. One of them is the best player in the game, Mike Trout (1.006), and the other is David Ortiz (1.025). There’s also only one player in baseball with a slugging percentage over .600, and his name is also David Ortiz (.622), in addition to leading the majors in extra-base hits with 78.

Make no mistake about it, this series meant more for the Blue Jays than it did for the Red Sox. Boston could’ve lost two out of three and still been in first place today. But they didn’t. Regardless, it was still the biggest series of the season for the Red Sox, and the biggest win of the year came on Sunday. I don’t care how many wins the Indians and the Rangers have. They play in weak ass divisions, and get to beat up on the Twins, A’s, Angels and White Sox. There’s one bad team in the AL East, the Tampa Bay Rays, and they have as many or more wins as Toronto, Baltimore, Seattle, Detroit, St. Louis, and Houston since August 14. Call it the last month. All of those teams are in the playoff picture.

I’ve said this before, and I’ll say it again. The best team in the American League going into the postseason will be the team who comes out of the American League East. They will be the most battle tested. And for the Red Sox to go into Toronto with three weeks remaining in the season, face all three of the Blue Jays’ best starting pitchers, and take two out of three, that’s about the best measuring stick this team is going to see all year. And they walked out the better team. Ski jump on ‘em, Jackie.