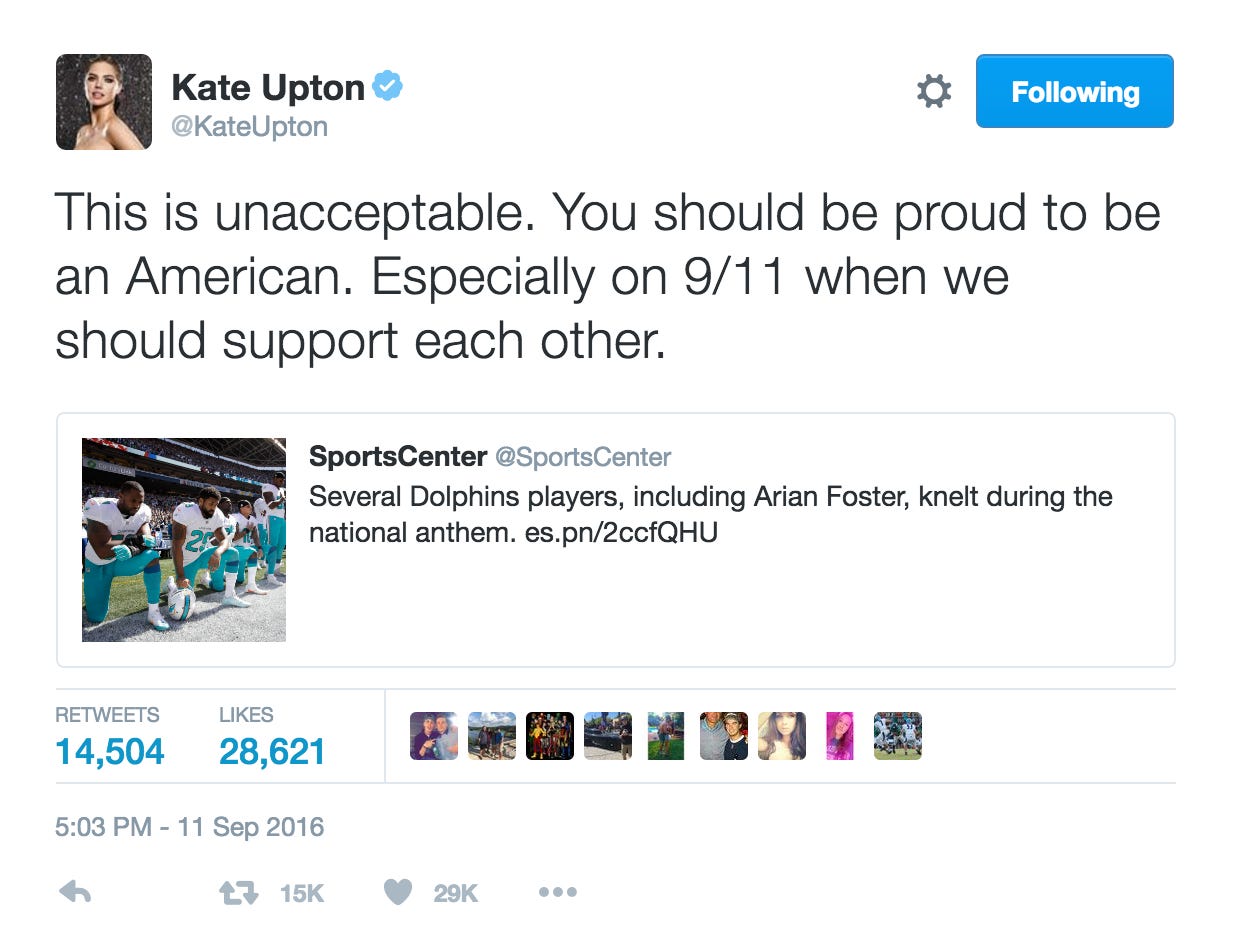 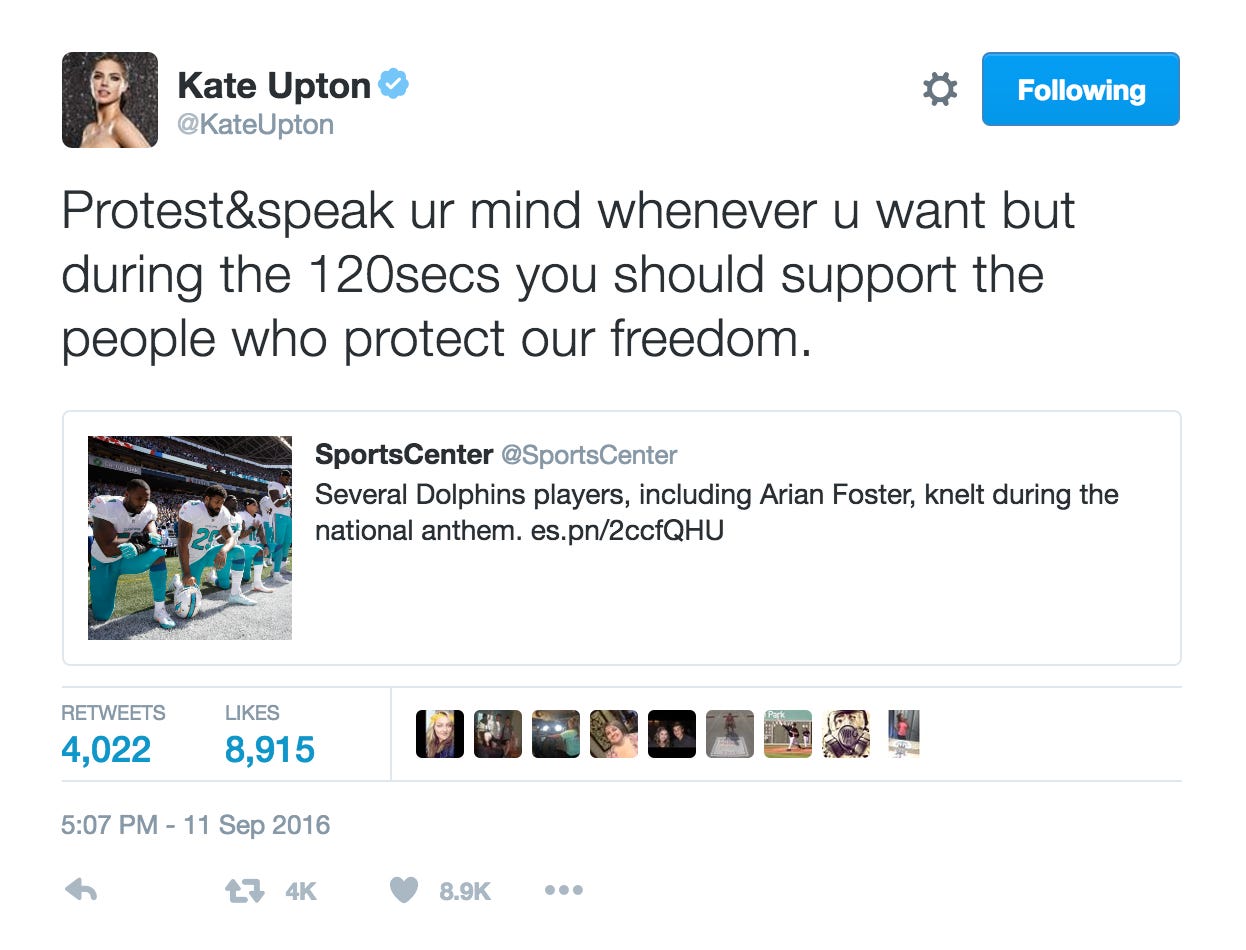 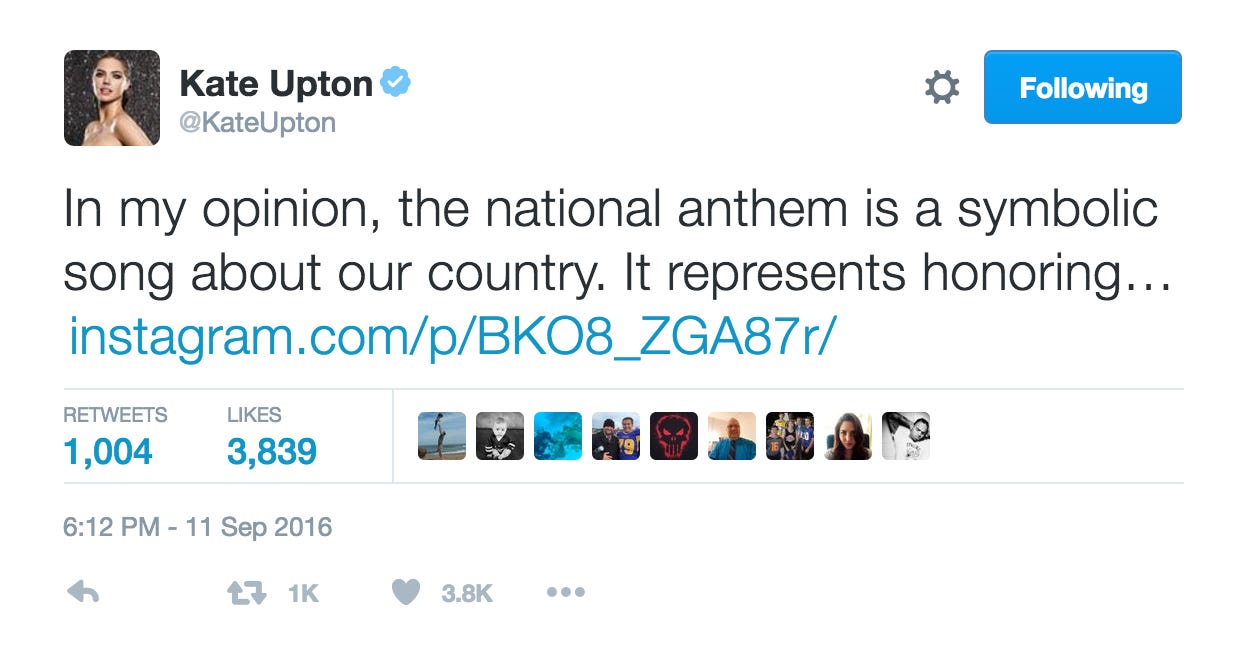 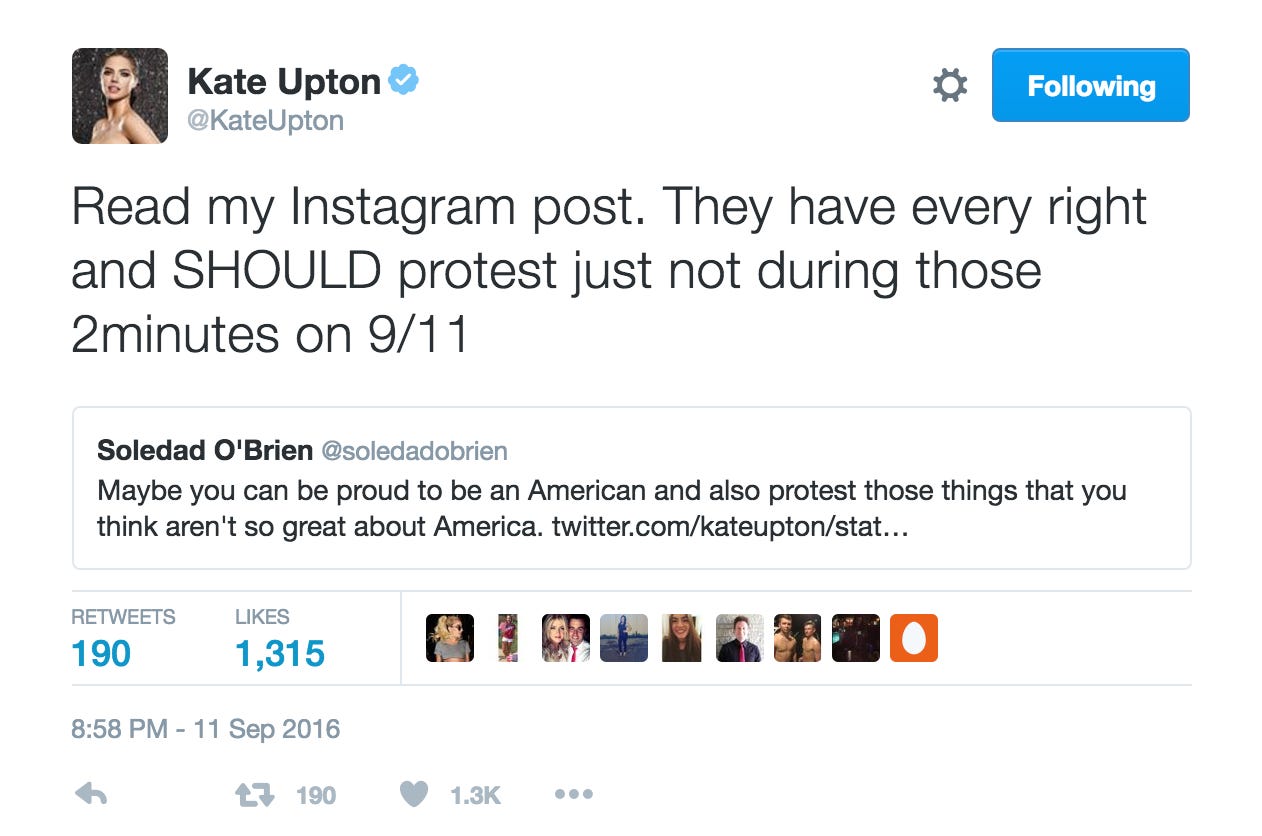 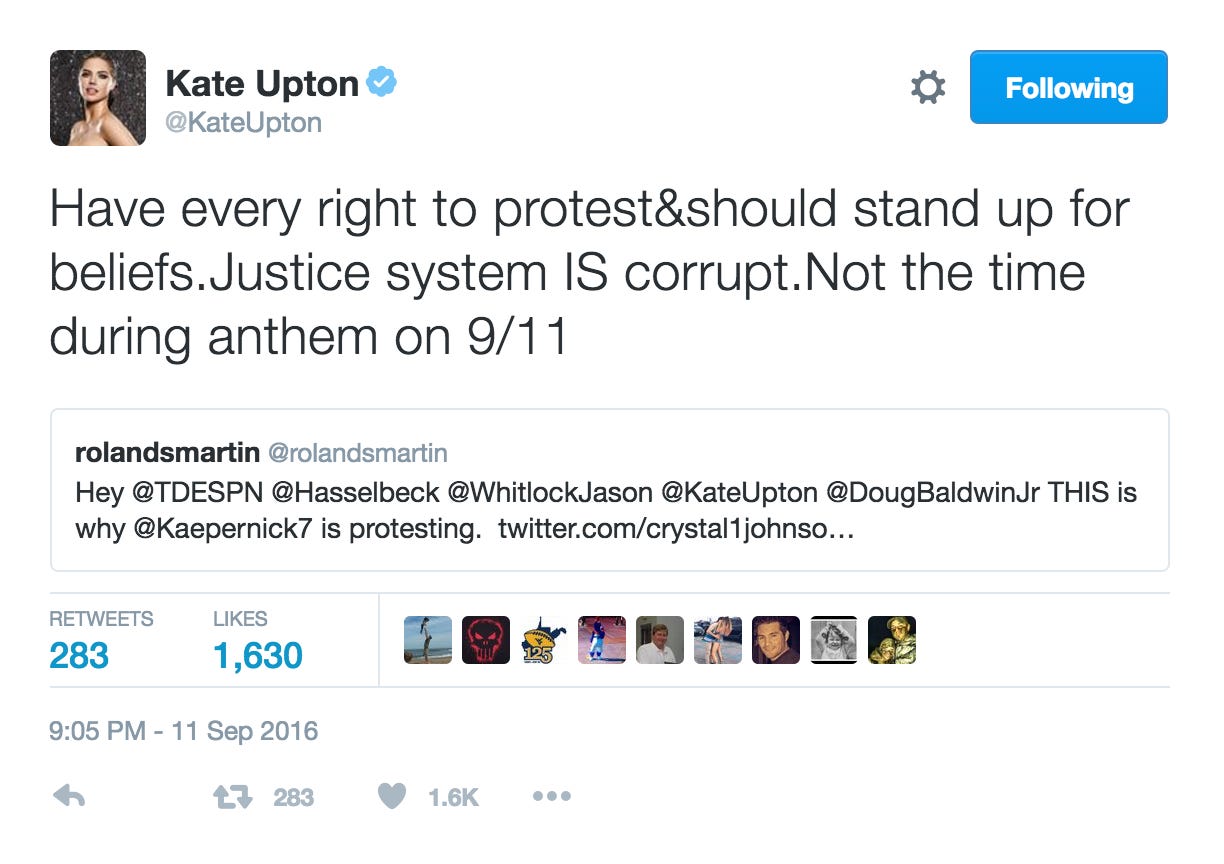 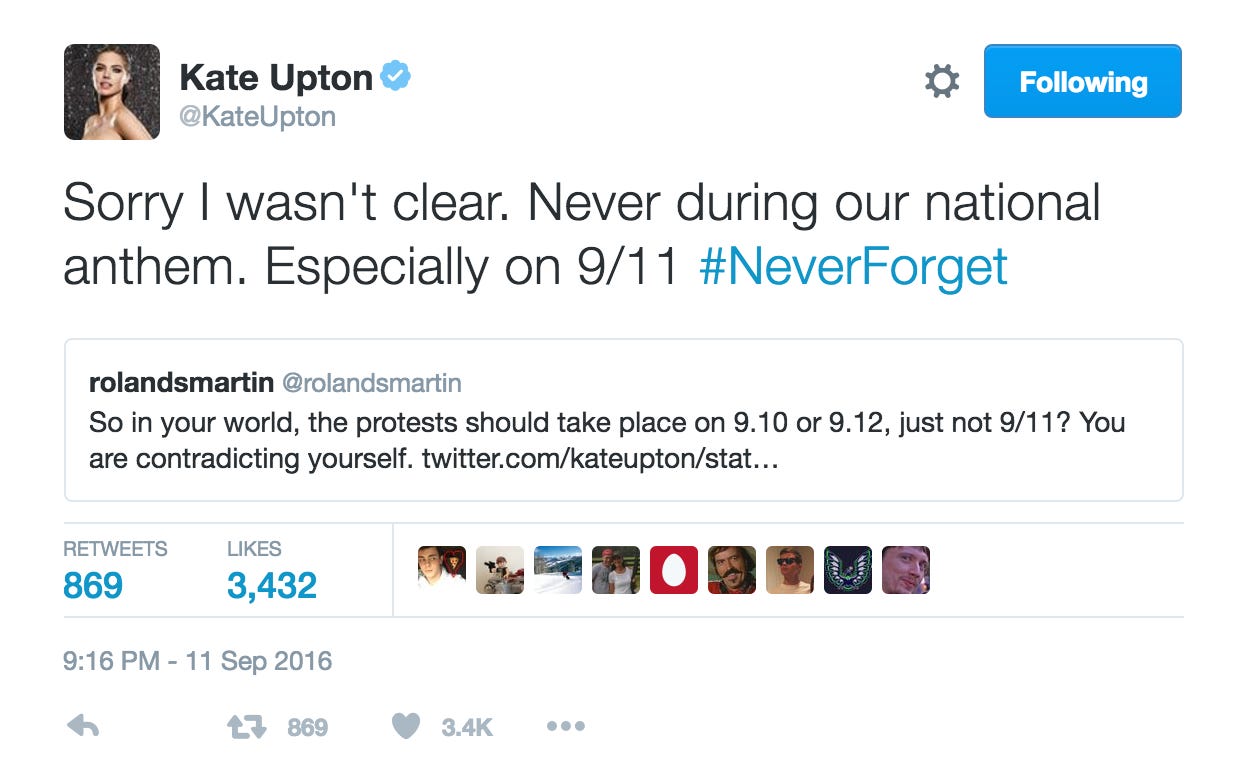 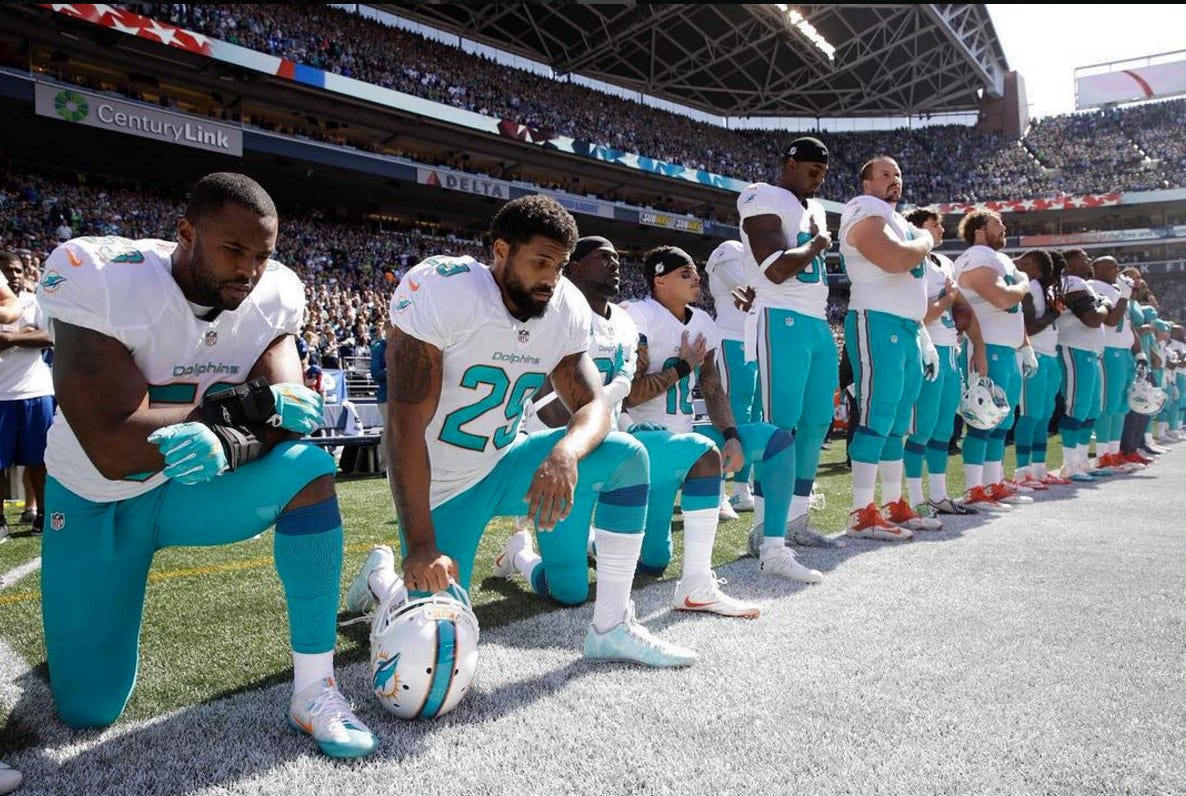 Kate Upton’s IG – In my opinion, the national anthem is a symbolic song about our country. It represents honoring the many brave men and women who sacrifice and have sacrificed their lives each and every single day to protect our freedom. Sitting or kneeling down during the national anthem is a disgrace to those people who have served and currently serve our country. Sitting down during the national anthem on September 11th is even more horrific. Protest all you want and use social media all you want. However, during the nearly two minutes when that song is playing, I believe everyone should put their hands on their heart and be proud of our country for we are all truly blessed. Recent history has shown that it is a place where anyone no matter what race or gender has the potential to become President of the United States. We live in the most special place in the world and should be thankful. After the song is over, I would encourage everyone to please use the podium they have, stand up for their beliefs, and make America a better place. The rebuilding of battery park and the freedom tower demonstrates that amazing things can be done in this country when we work together towards a common goal. It is a shame how quickly we have forgotten this as a society. Today we are more divided then ever before. I could never imagine multiple people sitting down during the national anthem on the September 11th anniversary. The lessons of 911 should teach us that if we come together, the world can be a better and more peaceful place #neverforget.

You know what this National Anthem protest/September 11th combo really needed? Social commentary from some fat titty supermodel!! Thats the exact sorta gasoline you need on the fire. Ordinarily I make fun of Kate Upton and call her a rectangle and say the whole world gives her a free pass but in this case I’m Team Kate. I’m nuzzled right between those bombs of hers. Count me in on Team Stand During The Anthem On 9/11. There’s a time and a place for political protests and the 15th anniversary of 9/11 aint one. Kate clarified she thinks you should always stand, no matter the day, and talked about how we should all come together as a society. Which I’m sure black folks love when a cream cheese white 23 year old girl is talking about social unity and they’re like “we just want police to stop killing us.” So, I understand Kate Upton’s sentiments that its a dick move to kneel on 9/11, because it is. But I can also understand some back lash on her comments.

What I cant understand is the angle the internet took to critique her comments. Apparently Kate Upton’s Uncle is some sort of politician and didnt vote to help First Responders. 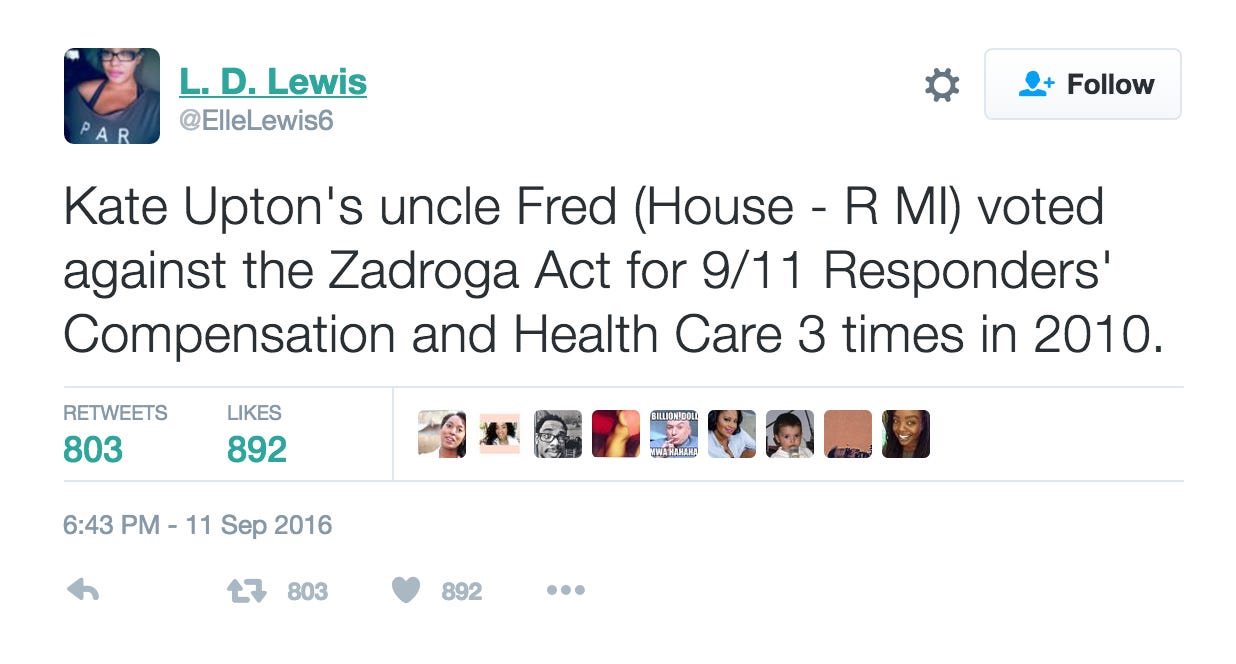 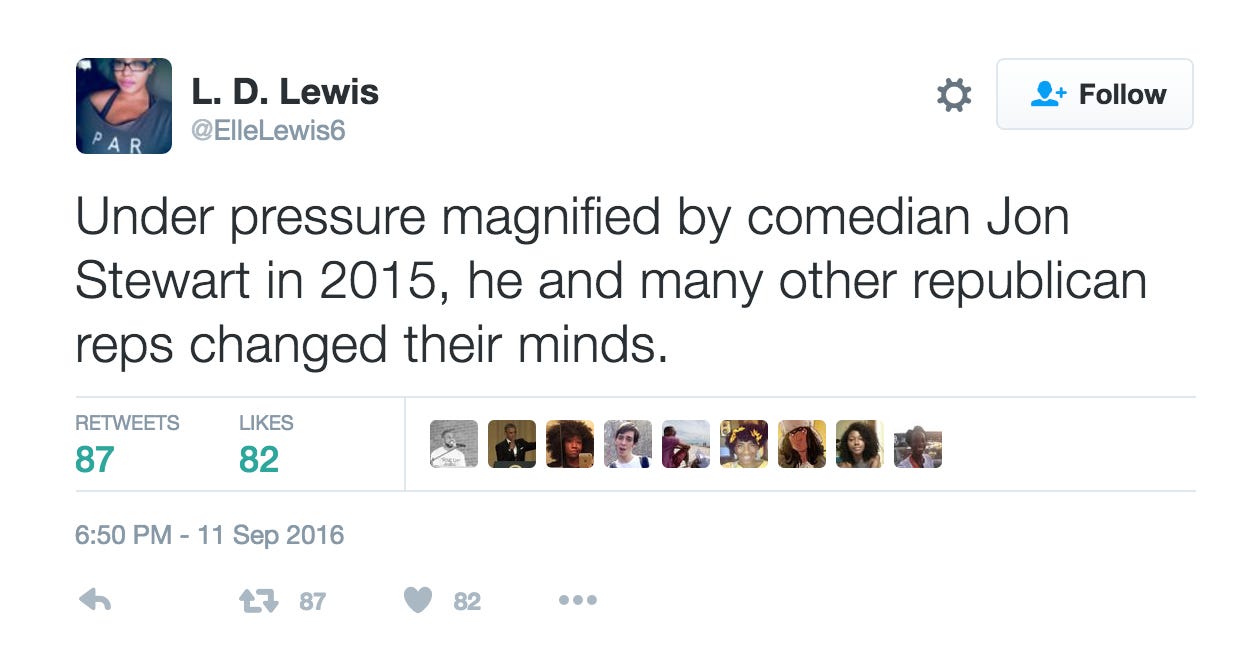 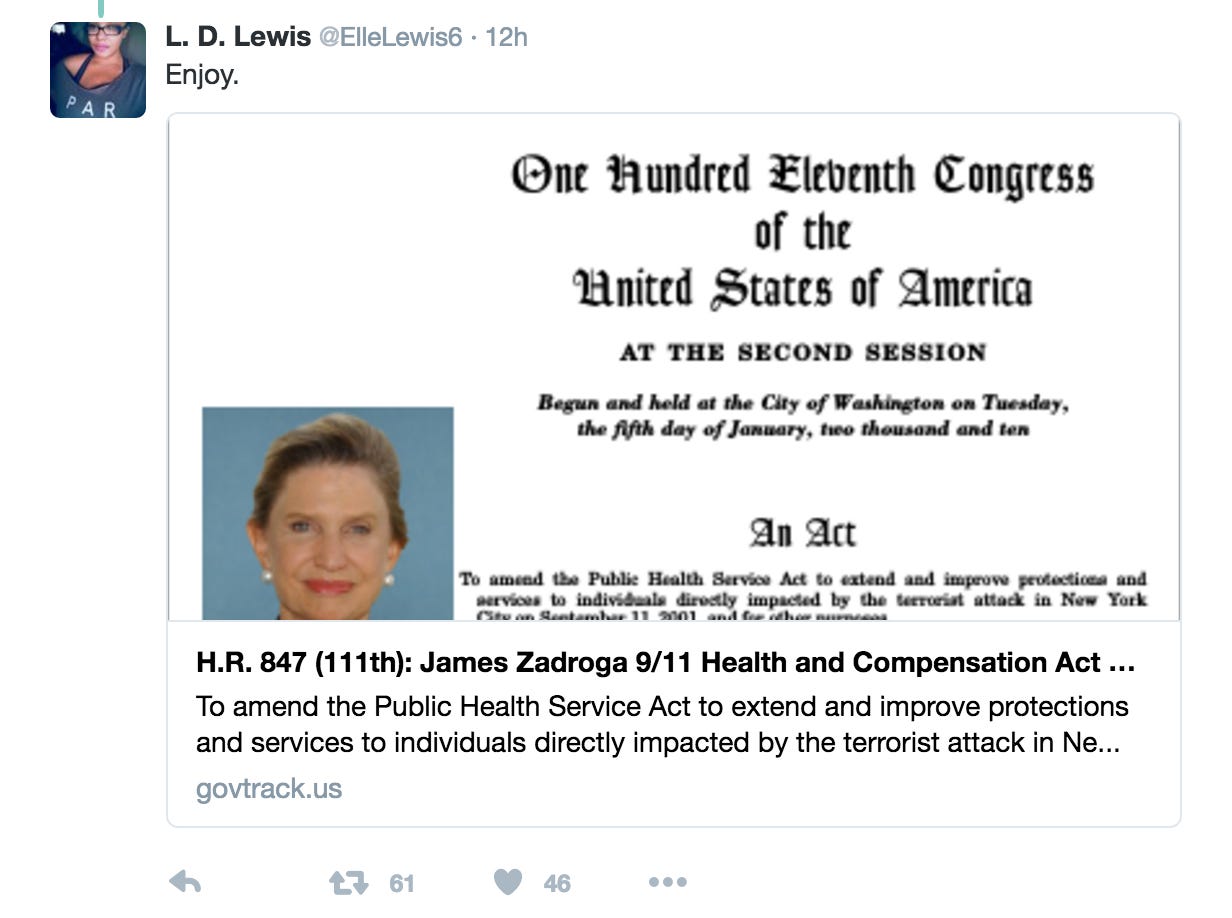 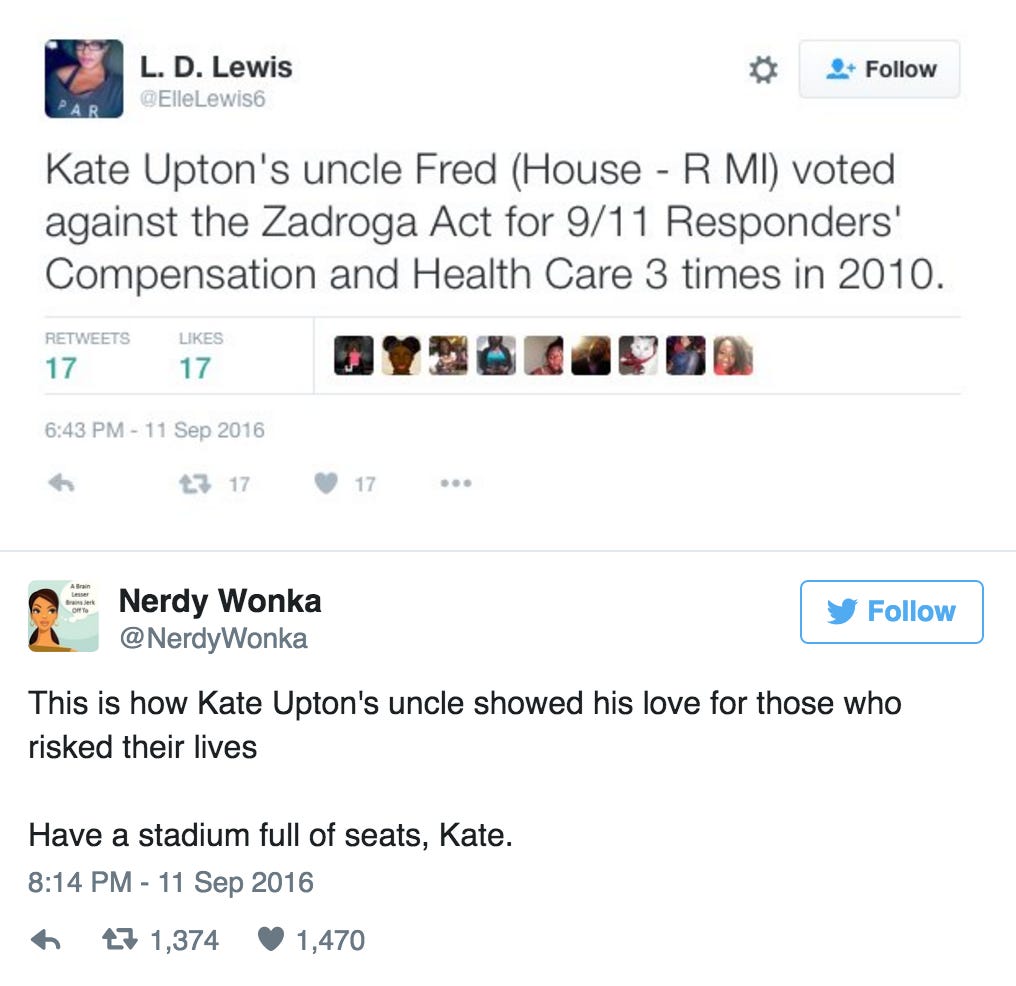 Oh no, Kate! Uncle Fred! You really fucked up now! If you think that you stuck it to Kate Upton because Uncle Fred voted one way during some 9/11 bill I dont think you know how this works. I actually had an Uncle Fred. He’s dead now. But he was old as shit and he was an astronomer. Legit he has some asteroids named after him or something. Anyway if I was ever taking a stand on something on social media and someone pulled up some statistics on what my fucking UNCLE FRED did, I would laugh in your face. I got another Uncle that I havent seen in like 25 years. Uncles are by FAR the most irrelevant of family members. Cousins are closer to your age, Aunts are a little more important because they are chicks and they try to love you and stuff. Obviously grandparents kick ass. Then comes uncles. They’re just there. So go ahead and disagree with Kate Upton’s national anthem stance but give me a break with your uncle argument.