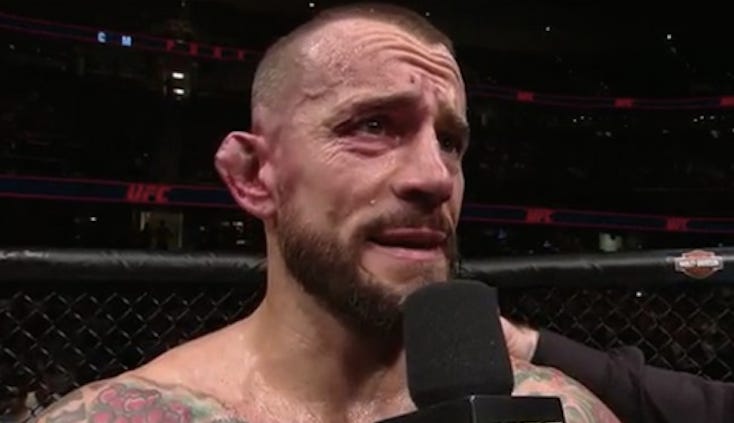 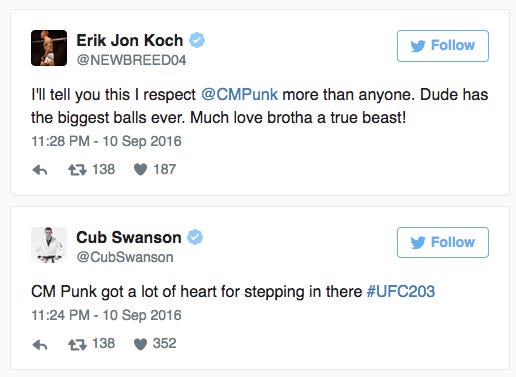 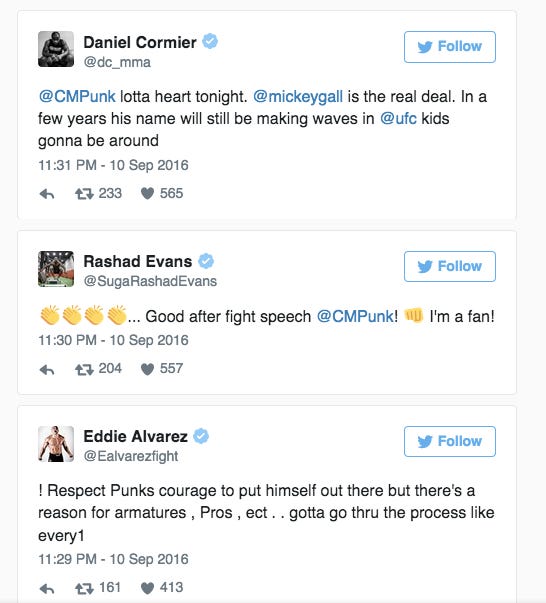 What are these people TALKING about? Those tweets are just from UFC guys but practically everyone on my timeline is giving props to CM Punk. They’reobviously only doing it because he got on the mic afterwards and turned into a children’s book, telling everyone that the only true failure is not trying and all kinds of bullshit like that. If he was just normal after the fight instead of a motivational speaker then everyone would be singing a different tune.

But, as it stands practically my entire Twitter timeline is giving him “props” for being “brave” and “having the balls” to step in the octagon. Fuckkkkkk that. I don’t know what CM Punk got paid last night but I can guaran-fucking-tee you it was more than any first-time fighter ever. It was probably more than Mickey Gall got for winning. I wouldn’t be surprised to learn it was more than anyone else on the card last night save for Miocic, maybe even more than him, I don’t know. Getting paid a boatload of money to get punched in the face a few times then choked out isn’t fucking brave and doesn’t take balls. You want to show you have balls? Go fight at the bottom level and work your way up like everyone else. Fight using your real name, not CM Punk. Don’t have your walkout song be the same one you used in the WWE. If you want props come-up like a real fighter and not just a celebrity using his established fame to get another paycheck. CM Punk is just an old version of Tim Tebow, right down to the “shoot for the stars, kids!” speeches, and I HATE Tim Tebow.

PS – Speaking of Tebow I guess he’s a huge UFC fan and I think it was Jay Glazer who said he should train for that. So when Tim’s done chasing his baseball “dream”/getting a $100k signing bonus when most people at that level get $1k/taking days off from chasing his “dream” to go back to ESPN, you know where he’s going for his next media circus.