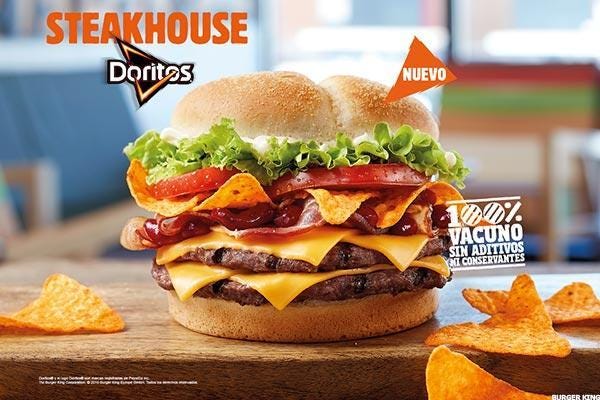 Fortune- Introducing the Steakhouse Doritos Burger. Burger King is taking a page from its competitors and adding Doritos to the menu. The fast food giant’s latest mash-up is called the Steakhouse Doritos Burger, and there’s not much to it: Just a few Doritos thrown on top of two beef patties covered in cheese. It’s available now until Nov. 21 in Spain-based locations. Spain is one of the largest markets in Europe for Burger King, according to The Street. If the Dorito burger tests well there, it could appear on U.S. menus.

Just when I thought Burger King couldn’t possibly be any dumber, they go and do something like this… and totally redeem themselves! My review of the Whopperito was one of my lowest moments as a food reviewer, and trust me there aren’t many highs when you throw some of these concoctions in your mouth. Chopped up cheap burger meat in a burrito was rough. But this is how BK gets back in the game. Sure just putting Doritos on a burger seems kind of lazy. But it’s effective. I’m not usually a chip on the sandwich guy. But sometimes I like to mix it up. Get a little sassy. Same thing applies with this burger. Sure it’s not a revolutionary idea, but it gets Burger King back on the right path. It’s like making a few free throws to get a player back in his rhythm. Would I like it if they were infusing the bun with Doritos or something? Sure. But beggars (I imagine BK’s number 1 demographic) can’t be choosers.

Nacho Cheese Doritos are the greatest snack on God’s green Earth and there’s not even a close second. They make everything better. And like I said when the Mac ‘n Cheetos first came out, a BK + Frito Lay partnership has so many potential partnership opportunities, it makes my brain hurt. So do the right thing Spain. You guys already live an awesome life with mid-day siestas and shit. Buy the shit out of these Doritos burgers so we get them here in the U.S. of A and allow Burger King to have a major comeback after that minor setback known as the Whopperito.

And while I only speak a little bit of Spanish, I’m pretty sure this says “Oh fuck yeah, I love having Doritos on my burger. Send this over to the Americans as a thank you for being such a wonderful country.”

P.S. I obviously love Doritos with every fiber of my being, but putting the words Doritos and Steakhouse in the same sentence is as disrespectful as it gets in the cuisine game.