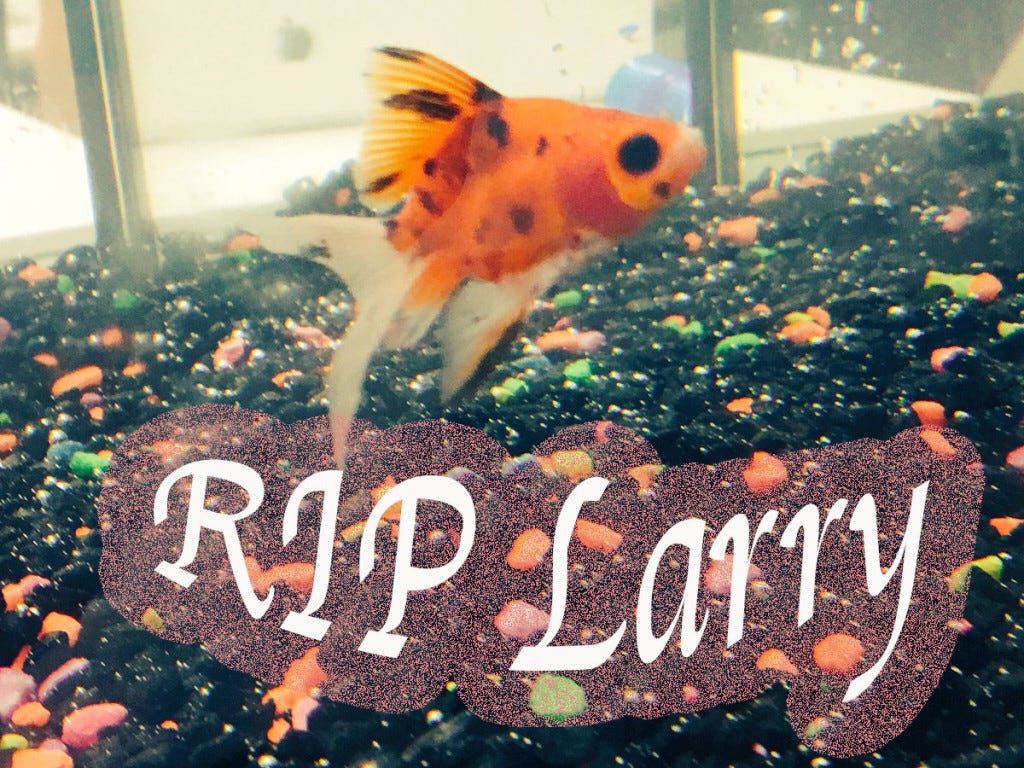 “A requiem for Larry”

Thinking back on the life in times of Larry I- the halfblind Pardon My Take gambling goldfish- I’m reminded of a old maritime joke, maybe you’ve heard it:
What do you call a fish with no eye?
A fsh
The joke works better when you hear it out loud but I think you get the point. Larry might of only had one eye, but when you apply the transtive property of quarterbacking- a fish with two eyes really has none.
And for every end there is a beginning. Every Bledsoe has its Brady. For every Robert Griffin III there is a Robert Griffin III, Jr.  And as we gather to mark the passing of our sweet boy Larry, we morn, but so shall we heal.
“To every thing there is a season, and a time to every purpose under the heaven:

A time to weep, and a time to laugh”

True, his life was tragically cut short. Every fish dies. But not every fish truly lives. Larry packed more living into his 12 hours on the Pardon My Take team then most goldfish pack into the cumulative output of every wad of sperm they gunk out onto every synthetic kelp bed they encounter over the course of there entire lives. It was because he shown so bright so fast that he will be remembered. Larry finished his 8 minute career as literally the most successful gambling goldfish in the history of the world. Either you die a hero or you live long enough to become a villain- so when you think about it,Larry’s frailty was a feature, not a bug.
He knew he wanted more out of life then to just swim around aimleslessly riding life’s fateful current. Larry was a type guy who made things happen- he was a fish & chips kelly type who allways wanted to dictate tempo.I’ll never forget during his first pick he remaned so committed to maintaining great pad level that he sunk to the bottom like a rock and refused to move for a solid minute. But that was Larry for you, pulling pranks like that just mere minutes before he died of a probably unrelated ailment. Most fish just would just be content to settle down and find a nice woman with adundant, fertile roe, high oxygen levels, and a functional circulatory system. But Larry kept the faith that he was destined for better things untill one fateful day Big Cat plucked him out of his humdrum existence and threw him into the lime light. Yes, Larry truly died as he lived- getting sucked into something he shouldn’t of ever been near in the first place.
In fish life, biting on the hook is a death sentences, but in gambling its a great way to improve your hit rate. Last week Larry was a nobody, and today there are literaly thousands cherishing his memory as the most famous gambling fish who ever existed.
All Larry ever wanted out of life was to be a star. We were just lucky enough to be the prism through which his light finaly shined, no offense to his right cornea.
gambling+ 4 Tags