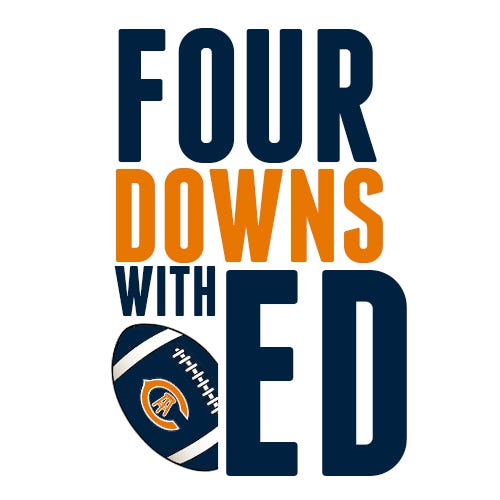 A new football sandwich is among us. Most teams will be having the standard in the Italian or the Turkey club while others are stuck with a bullshit Unwich (the Cleveland Browns are Unwich as shit). But, this season the Bears are prepped for somewhat of a mystery meat. In 2014 we all expected a winning season on the heels of the best offensive season we’ve ever had, while 2015 was met with much lower expectations of potentially being a team with a top 3 pick. Now, I’m not suggesting the Bears are going to be good. The odds are that we’ll be poor or mediocre trying to find a middle ground between the last two seasons.

But, there are reasons for optimism and instead of previewing a Week 1 match up against a Quarterback that people know very little about I will highlight all the reasons why I think the Bears can surprise people a little bit this year.

1st Down: Jerrell Freeman & Danny Trevathan are the most competent inside linebackers we’ve had in literally years

It’s been a sharp, sharp decline at middle linebacker since Urlacher and Briggs fell out of their prime. There have been countless guys try to replace them from 1st round draft picks to undrafted free agents and almost none of them have been even serviceable. Freeman & Trevathan are going to change that. I really liked what I saw from Freeman in the preseason. He vision and ability to blow up a play in the back field really stuck out. Trevathan comes from the best defense in the league and is a strong guy to build around from an on the field and leadership perspective. Just wait until Floyd figures it out and McPhee comes back. It’s going to be a lethal foursome.

2nd Down: Pace identified a major issue and corrected it immediately rather than just rolling with it

I’m talking about the offensive line here. Obviously Sitton fell into his fuckin lap and the Grasu injury was unforeseen as well, but it was so huge for him to act quickly on this. The O-line has been nothing short of a disaster from the limited preseason snaps we’ve seen. Bobby Massie is going to burn us at some points this season, but shoring up that middle core was so important. If none of this gets done, then I don’t think anyone in Chicago is optimistic about this season.

3rd Down: The front 3 should finally be able to put some pressure on the Quarterback

Trevathan and now Sitton have gotten a lot of press about being huge pick ups for the Bears, but I still don’t think people have appreciated Akiem Hicks yet. He’s going to be a bonafide force on one of the ends and whoever is playing OLB on his side is going to be able to clean shit up. I was very happy with Goldman last year and Unrein was solid as well to help them shape our first unit. The second unit almost excites me more though. It’s almost a make or break year for Cornelius Washington and Will Sutton, two guys who I have a lot of confidence in. Sutton has shown flashes and Washington when healthy is a tough motherfucker to block. If Bullard can be productive watch out for that back 3.

1st Down: The division is declining

The unanimous pick for the division is 1. Packers, 2. Vikings, 3. Bears, 4. Lions. I’m not delusional and completely understand that division runs through Aaron Rodgers and Green Bay but just based off last year, it’s easy to see that the window is closing fast on them. Rodgers is quickly approaching his mid-thirties, their top defensive players are aging right along with him, and his top target is as big of a question mark as anybody coming off an ACL tear. I like what the Vikings have done on defense, but I’m still not sold on them offensively even with Bridgewater, and the Lions are going to be the Lions for the foreseeable future. The Bears absolutely have a strong chance to be in the thick of it within the next few years.