A San Antonio mattress store has drawn widespread criticism after posting a video on Facebook promoting a “Twin Towers Sale.”

In the video, Miracle Mattress manager Cherise Bonanno says that there’s no better way to remember the Sept. 11 terrorist attacks than the sale, which offers any size mattress for the price of a twin mattress. Two employees stand in front of a pair of towers of mattresses and an American flag.

At the end of the video, which has since been removed from the store’s Facebook page, Bonanno swings her arms and the employees tumble into the mattress towers, knocking them over.

Bonanno shrieks, then turns to the camera and says, “We’ll never forget.”

I’m not the most politically correct fellow on the block but it feels like, and this just might be me, that it’s just too soon still to have a sale called the Twin Tower Sale Event. Just a hunch.

I realize that there’s holiday blowouts surrounding Thanksgiving, Christmas, and Memorial Day but a Twin Tower Sale just feels like it’s too far.

It’s amazing that these types of things still happen. It’s not like this was a live tv or radio fuck up. Someone wrote, produced, and edited this commercial and no one thought, “Hmmm. Might not be a good idea to have mattresses falling like they are the towers in the deadliest terror attack in American history.” While I always appreciate a good sale, I dont agree that there’s no better way to remember the Sept. 11 terrorist attacks than this sale, which offers any size mattress for the price of a twin mattress.

Side note: I don’t think it was intentional but this mattress lady Mr. Krabb meme’d herself and she deserved it. I wont be buying a mattress from their store, but I do hope they offer a good deal on an entertainment system at their annual Benghazi Blowout Sale. 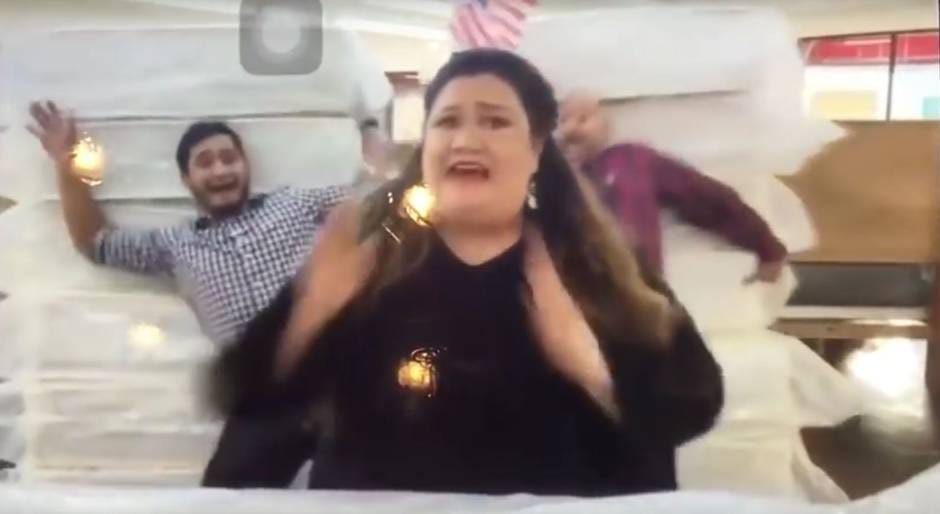