Annnnd….we’re back! NYC officially getting daily fantasy back as of a few weeks ago, which means it’s time to get back into the money making game.

Full disclosure, that NY ban hit me so hard and so fast that I basically had to force myself to erase daily fantasy from my mind. We’re talking like hypnosis and meditation and shit. Went from spending 1-2 hours a day on research and lineup building to just a huge whole in my life. So it might take a few weeks to get back into the swing of things and get myself right mentally. Hopefully the winnings start rolling in soon so I can pay my therapy bills. 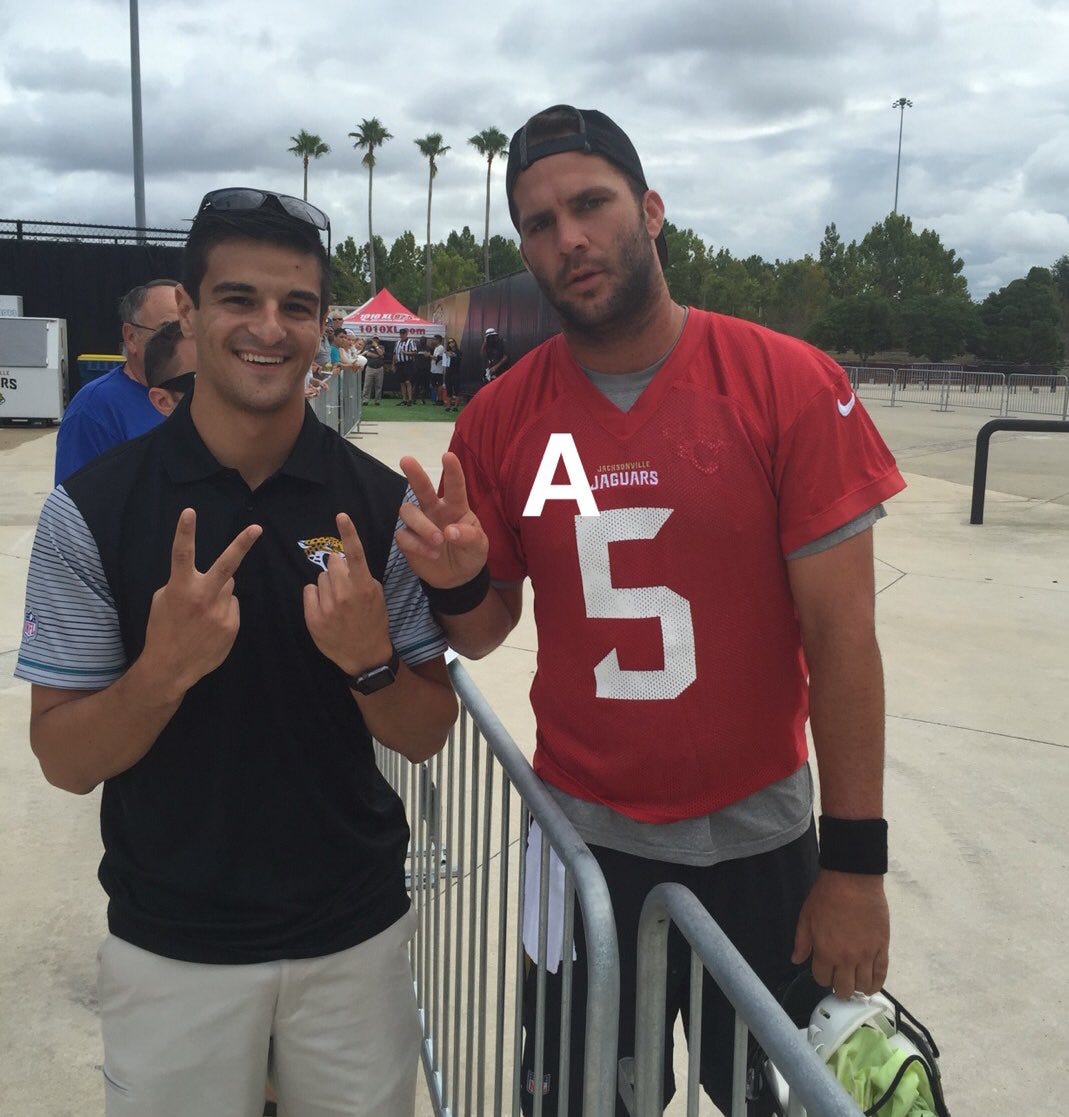 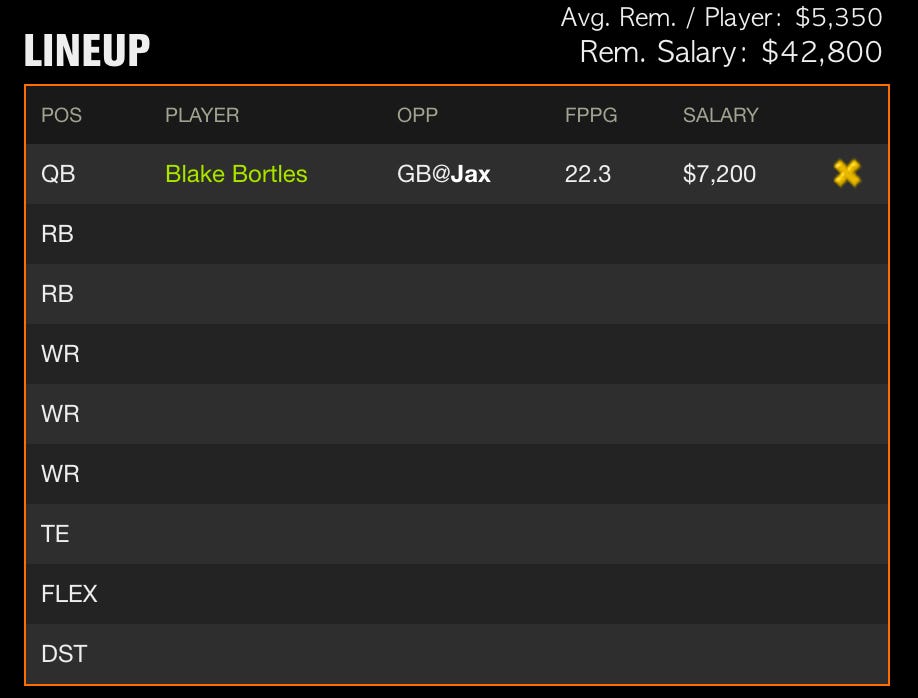 What better way to kick off the season than making the very first pick one of the biggest Barstool fans in pro sports? Blake Bortles, as you may know him from either the Jacksonville Jaguars or the Wikipedia Club presented by Pardon My Take.

Aside from the fact I’ll be rooting for him though is the fact that his matchup is awesome and he’s underpriced. You remember the fantasy games he was putting up last season? Video game numbers. Now he’s got an opening day game with a high total against the Packers D, where he’ll most likely be playing catch up, and where the run game stinks even if they aren’t. Lots of slinging it around and a real safe bet to hit that 300 yard point bonus.

Pair him up with Allen Robinson if you can afford it, or Allen Hurns for a cheaper option, then read about the record setting performance on his Wikipedia page after. 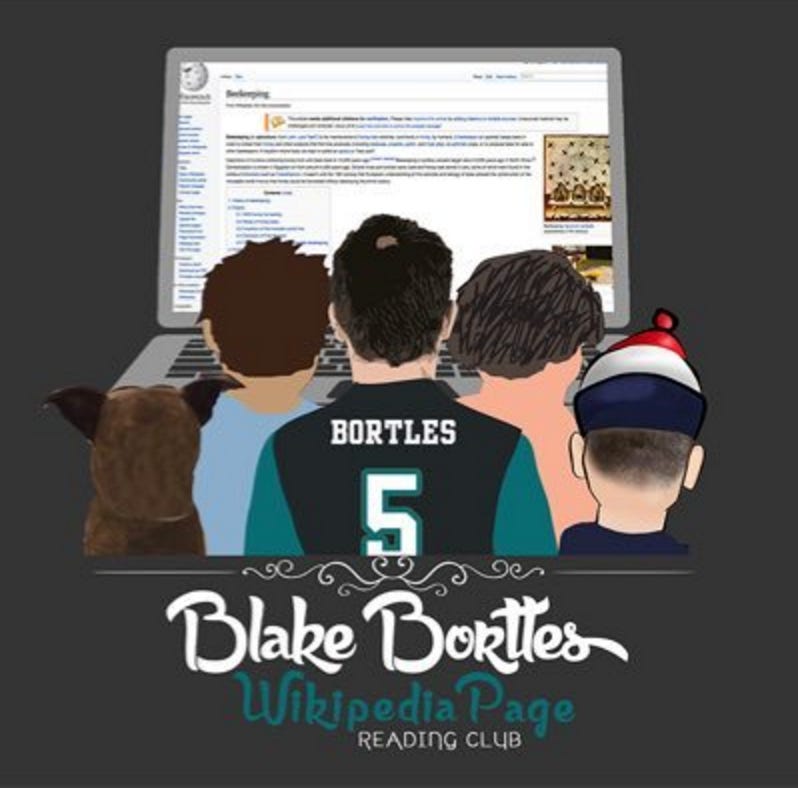 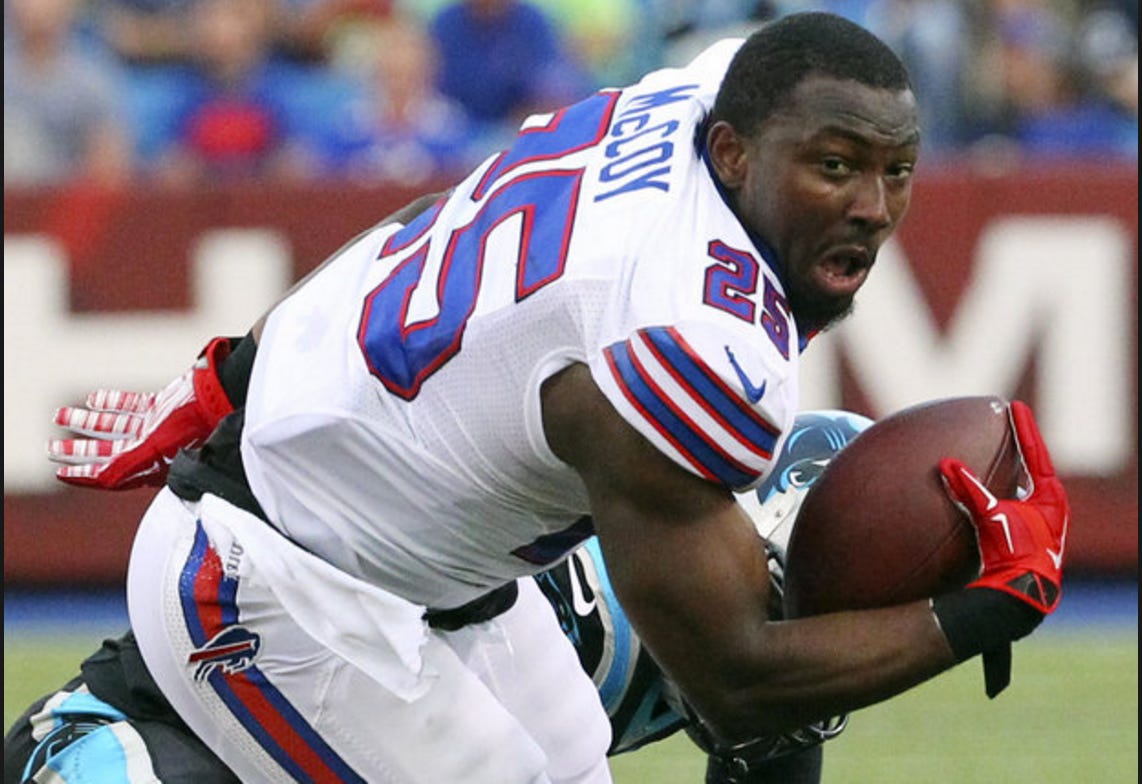 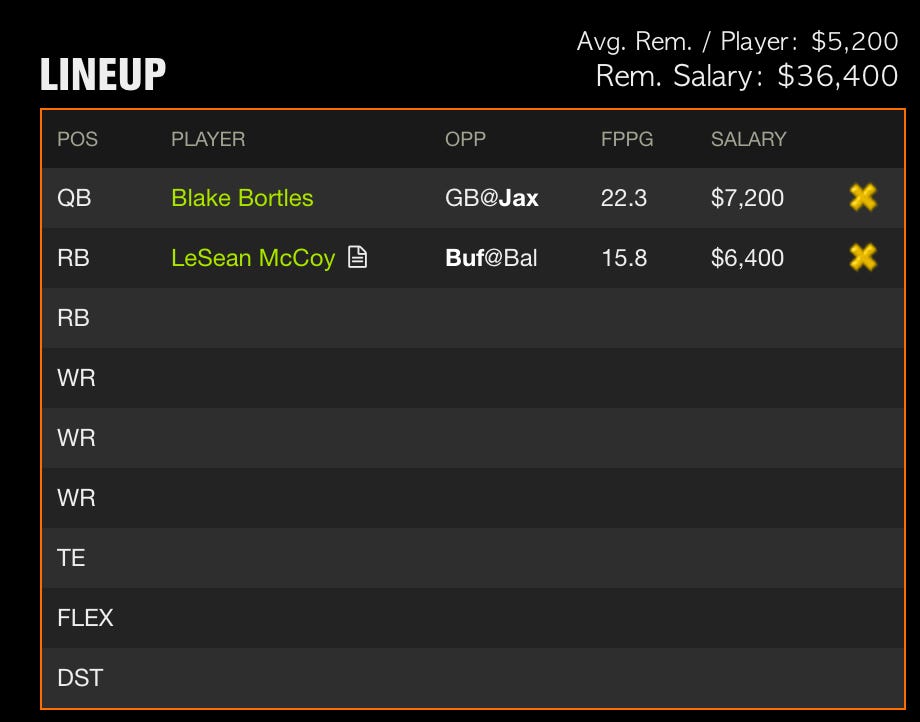 While I don’t get too crazy everybody knows I like to keep things at least a little fresh around here, not just rattle off the highest priced guys or the most popular plays of the week. For example you’ll hear everybody talking about ‘Zeke, everyone paying up for Adrian Peterson, everybody and their mother loading up on Spencer Ware. Trying to go off the board a little bit I like Shady a lot, mostly because of price and opportunity.

This ain’t the Ray Lewis Ravens defense, and with fat ass Karlos Williams getting cut, it’s basically the Shady show in the backfield. I’m sure he’ll piss off season-long owners soon with whatever injury he comes up with, but for one week only fantasy, I love the spot for him. 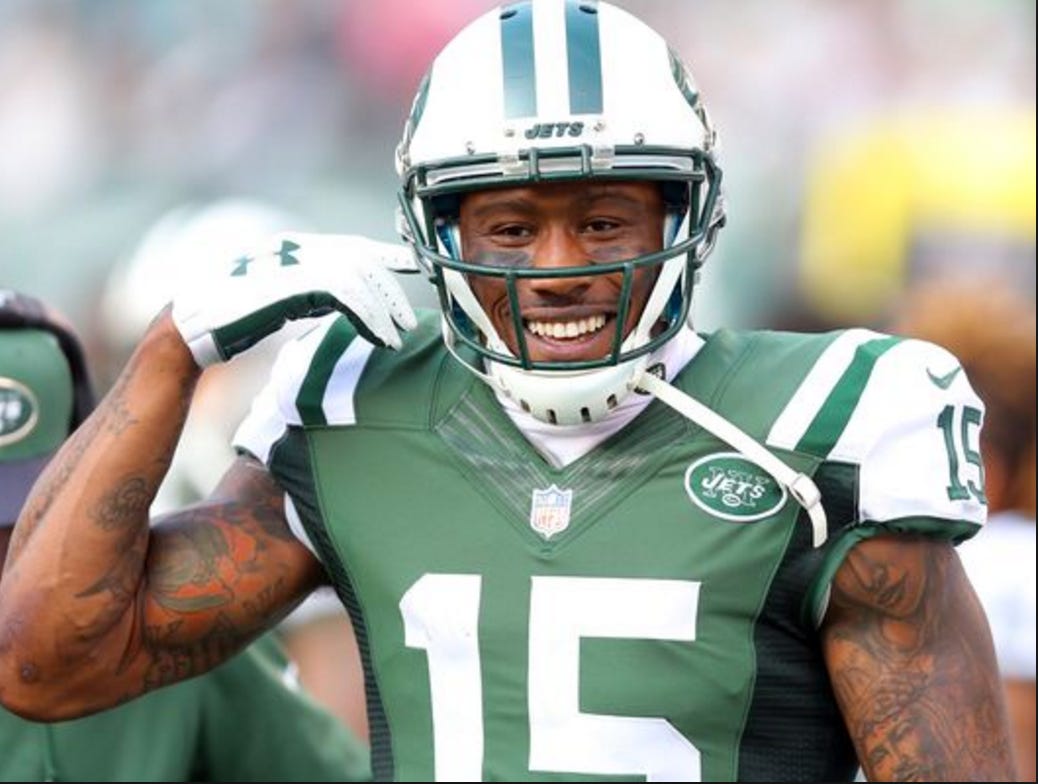 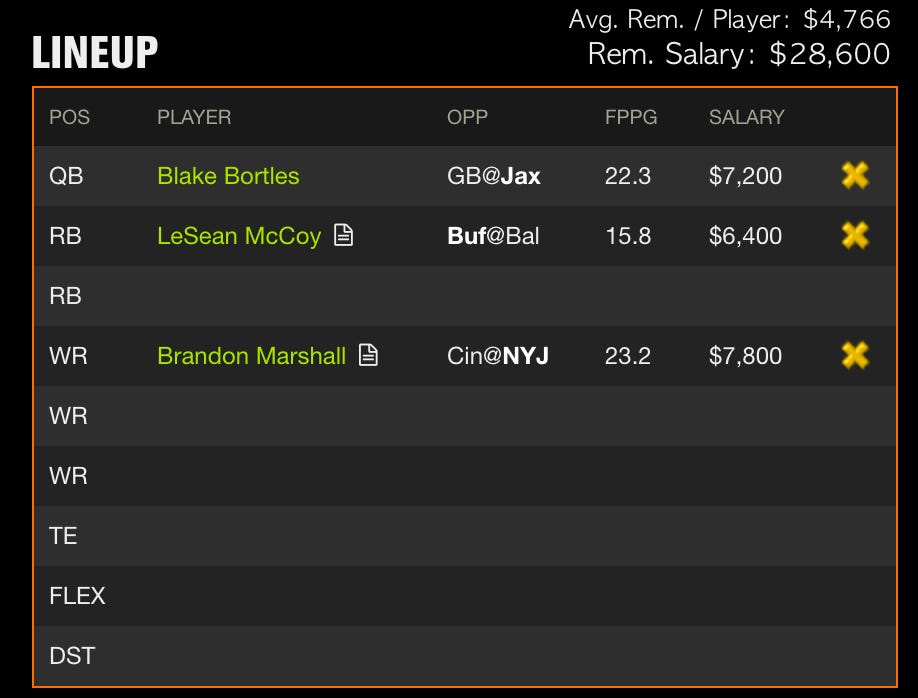 Love me some Julio Jones this week, DeAndre too. But it’s not like I’m gonna waste a whole blog feature on obvious guys like that. For tournaments I think I’ll get a lot of BMarsh exposure and hope he’s a lot lower owned. I mean when you picture the Jets I know you basically want to puke, but when it comes to fantasy, Fitz loves chucking that shit all over the field, and Marsh and Decker see like 100 targets every game – I could easily see Marshall going off for a big one on opening weekend here, especially after that whole Antonio Brown shit talking episode.

Possible negative – if he kneels during the anthem on 9/11, I’ll cut his ass from my team so fast.

Good luck on Sunday. Got any sweet sleeper picks I should consider? Tweet them at me. Also if you enjoy the blogs and want to deposit on DK for the weekend use my referral code and we’ll both get hooked up. Also remember to get all your lineup updates through the Rotogrinders app and try a 7-day free trial of their DraftKings incentives.